Articles: Adoption of Bioplastics and Biopolymers Thrive Towards Sustainability Goals

Adoption of Bioplastics and Biopolymers Thrive Towards Sustainability Goals

Adverse Effects of Plastics give Birth to Substitutes

The accumulated plastic waste and sequential uncontrolled plastic pollution are significant environmental difficulties faced by the government and agencies.

Global plastic production reached nearly 370 million metric tons in 2019. According to the UNEP, merely 9% of all plastic produced has been recycled, 12% has been incinerated, and the remaining has been piled up in landfills. Traditional plastic releases harmful gases during the production process, which is a matter of concern.

Plastic produced from renewable sources is perceived to obtain a lesser carbon footprint as the raw materials take up carbon dioxide during their production and mitigate the economy’s dependency on fossil fuels. The adoption of bioplastics and biopolymers in fields such as carrier bags, soil cover films, and single-use packaging is also proposed as part of technological progress in the bio-economy.

Additionally, petroleum-based plastics possess adverse effects on health when exposed to heat. As a result, food and beverage end-use industries are gradually shifting towards paper, metal, and other green packaging formats. The manufacturers and consumers are well aware of the consequences of plastic and are, therefore, inclining towards sustainable options.

Factors Drawing the Adoption of Bioplastics and Biopolymers

Anaerobic absorption of biodegradable plastics provides an optimal ratio of carbon to nitrogen in the process, causing fewer emissions. Biodegradable plastics substitute non-degradable plastics in products that have the potential to leak into the environment, overcoming plastic pollution. As a result, bioplastics and biopolymers are gaining significant traction due to various benefits over petroleum-based plastic.

According to European Bioplastics, the global production of bioplastics in 2020 was around 2.1 million tonnes and is expected to increase by 2.8 million tonnes by 2025. Contrary to the production capacities of 2019, an increase in bioplastic production, especially in biodegradable plastic-type such as PLA, PHA, PBS, Starch blends, etc., is foreseen. It is due to a faster and natural breakdown process over traditional plastics, as biodegradable plastics are discarded and absorbed back into the system. 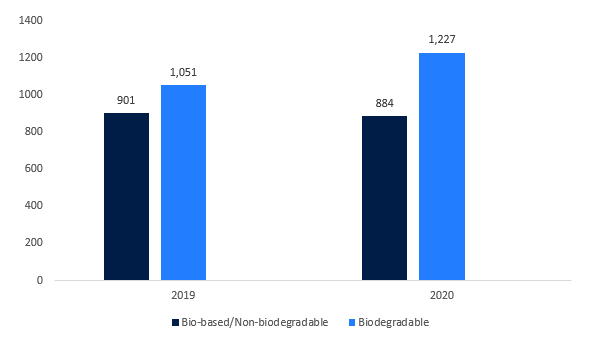 Regions Viable for Bioplastics and Biopolymers

The Asia-Pacific region commands the production of over 45% of bioplastics and biopolymers, marked at a value of USD 2,548.3 million in 2021. China is expected to have the largest market for bioplastics and biopolymers in the region. Bioplastics are produced by companies in Europe, the USA, and Asia, with some prominent companies being Corbion N.V. (Netherlands), CJ CheilJedang (Korea), BASF (Germany), NatureWorks LLC (USA), Tianjin Guoyun (China), and Novamont (Italy). 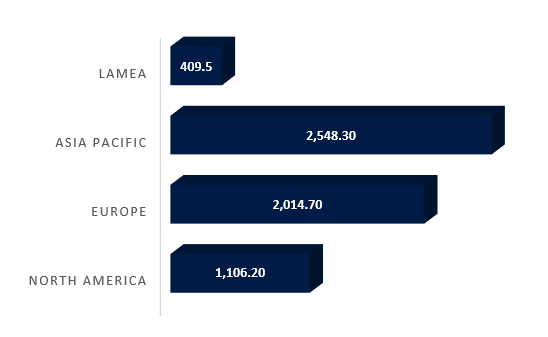 Table 1: Availability of Bio-based and Biodegradable Plastics as Experienced by WFBR and the Global Number of Producers, by Type (Nova Institute, 2015)

Cost of Bioplastics and Biopolymers

Bio-based and biodegradable plastics are costlier than fossil-based plastics. Further, most bio-based plastics have pronounced density, which adds to the higher price. There are, however, certain price limitations on a product level. Design modifications and explicit material properties allow material savings; for instance, PLA is stiffer than PS, thereby PLA products can be down-gauged in thickness.

Additionally, succinic acid is fabricated more effectively from biomass than fossil feedstock. It is suspected that with an increased production volume, the price of bio-PBS will drop from 4 to 2.6 €/kg.

Reason for PLA’s Traction in the Market

PLA or polylactic acid possesses several characteristics, which makes it the most prevalent bioplastic. PLA is stiffer, has a smoother appearance, and has a low energy consumption during production. It is stable, has moderate heat resistance, and can produce a consistent performance for a long duration.

The applications of PLA have widened with usage in durable structural parts, generating high demand. Besides property enhancement with suitable additives, the materials must satisfy the compostable standards outlined in ASTM D6400 or EN 13432. Strategies such as plasticization, copolymerization, and melt blending have improved the toughness and ductility of PLA.

Impact of Covid-19 and Associated Challenges

Covid-19 has led to the disruption of the supply chain, production capacities and has adversely affected the businesses. Due to prolonged production stoppages and a ban on transportation, several end-use industries had to bear tremendous losses. Thus, the bioplastics and biopolymers market observed negative growth. However, the relaxations announced by the regulatory bodies are expected to impact the market growth positively.

Bioplastics and biopolymers are categorized into two types, biodegradable or bio-based and non-biodegradable. The biodegradable category holds the highest market share and is expected to produce nearly 1.79 million tonnes by 2025.

Innovative bioplastics and biopolymers such as bio-based PP and PHAs are expected to drive the growth. PLA will also expand by 19.5% due to investments in PLA manufacturing sites in Europe, the USA, and China by 2025. PLA and PHA are biodegradable and highlight a wide array of mechanical and physical attributes. These are expected to hold nearly 30% of the market by 2025, collectively.

PP is one of the most popular and versatile plastics with excellent barrier properties. A bio-based version of olefine has been predicted for many years. For bio-based PE, new production volumes are planned to open in Europe and Latin America over the coming years and are liable to outshine and hold 11.1% by 2025.

Further, bio-based PET will offer a share of nearly 3.3% of the overall capacities. Bio-based, non-biodegradable plastics such as bio-based PET, PE, PA are supposed to hold nearly 25% share.

Purposes to expand production capacities have not been accomplished at the rate foretold in previous years. The focus has turned to the advancement of PEF, a new polymer presumed to enter the market in 2023. PEF is analogous to PET but is bio-based and possesses superior barrier characteristics, presenting it as a supreme material for beverage bottles.

Packaging remains the largest field of application for bioplastics and biopolymers, wherein the flexible packaging end-use industry is expected to have the highest production by 2025. Several other end-use industries such as consumer goods, agriculture, and textile continue to diversify. Segments such as automotive, building, and construction products continue to increase their relative share as these end-use industries use traditional plastics for raw materials. The reason being, bioplastics and biopolymers don’t offer some properties, which are required to replace conventional plastic. 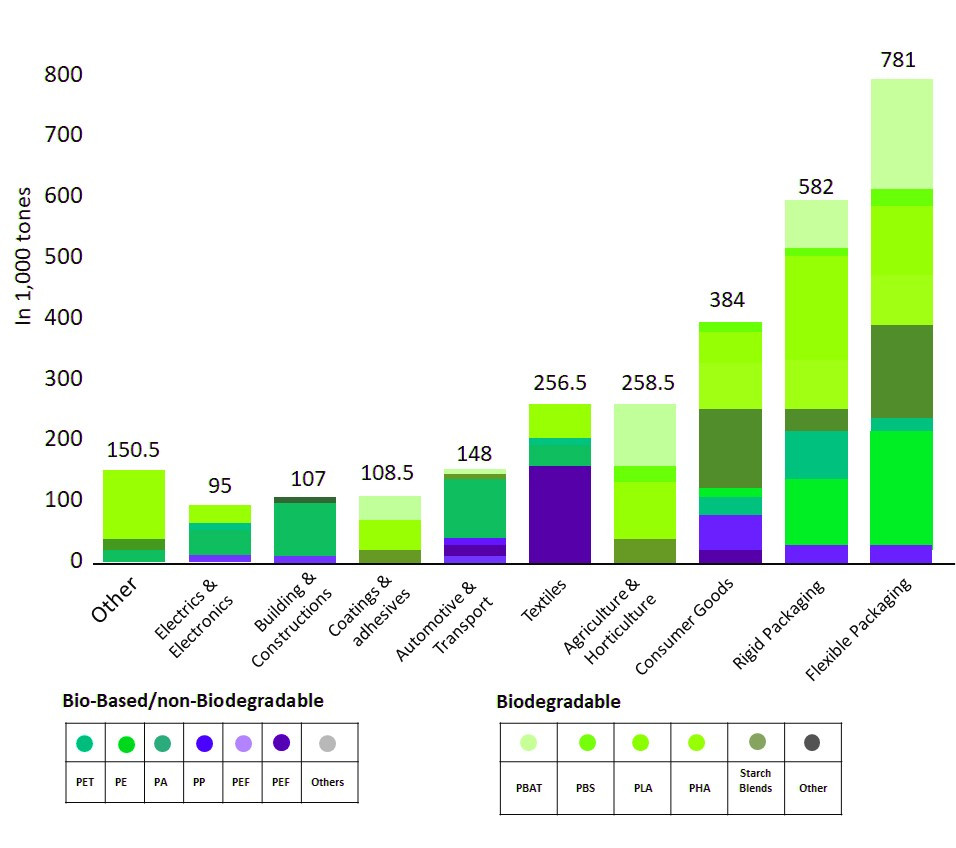 Developments for Enhancement of Businesses

Morrow of Bioplastics and Biopolymers

Future projections of a circular economy emphasize that a combination of recycled and bio-based resources will serve as a feedstock for plastic needs. However, a heavy investment in new technologies, including advanced recycling tech and bio-based plastic capacity, is required to obtain an ideal future. It is expected that sustainable plastics will make over 15% of production by 2030.

The adoption of conventional and advanced recycling, bio-based plastics, and alternative materials quantifies the impact of bans and other regulations to predict the future of sustainable plastics. Single-use plastics are in crosshairs with consumers and regulators, and companies across varied industries are trying to deploy sustainable solutions. Both companies that produce plastics and use them in their products need to understand the outlook for sustainable plastics and alternatives to prepare the strategy.

Segmentation of Bioplastics and Biopolymers Market

Based on the Type:

Based on the End-Use Industry:

Based on the Regions:

A PHP Error was encountered