Articles: An Insight into the Widespread Coffee Capsules Industry

Coffee capsules are ready-to-use sachets that make preparing a single cup of coffee easier. Since they are single-use items, they do not lose aroma, flavor, or intensity once opened. Coffee capsules simplify the process by allowing you to insert the preferred flavor capsule into the machine and press the button.

The global coffee capsules market was worth USD 14,640 million in 2020. With a CAGR of 7.07 %, it will reach USD 29,657 million by 2030. The market is segmented into divisions based on product, application, distribution channels, and geographical viewpoint.

The Growing Prevalence of Coffee Capsules

The desire for coffee capsules is expected to rise due to the rising demand for convenience foods, changing lifestyles, and specialty coffee capsules. Further, demand is likely to increase due to the manufacturer's eco-friendly packaging. Non-alcoholic beverages have gained in popularity in recent years. RTD coffee and tea, bottled water, carbonated soft drinks, and fruit juices are examples of non-alcoholic beverages. Consumption of non-alcoholic beverages is expected to rise due to increasing urbanization, greater disposable money, changing lifestyles, and improved health awareness.

Coffee is a popular non-alcoholic beverage known for its aroma and caffeine content. Furthermore, it is the world's second most exported commodity behind oil. Coffee is presently cultivated in over 70 tropical countries and shipped worldwide. Coffee is commonly consumed in Finland, Norway, Iceland, Denmark, Sweden, the Netherlands, and others. Coffee consumption is rising due to its health benefits and the proliferation of coffee shops.

In the case of coffee, convenient forms such as coffee capsules are becoming increasingly popular among the general public (especially in North America and Western Europe) for producing quality coffee at home. According to Intelligent Blends, a single-serve beverage company, over 25 million Keurig® and K-Cup® brewers are installed in homes and businesses across the United States, with millions more sold each year. Single-serve brewer penetration rates in major cities in the United States and Western Europe range from 23 to 75%.

Furthermore, according to the Intelligence study, Folgers had the most household penetration in 2018, with 33.60% of US homes consuming this brand of single-cup coffee. According to the National Coffee Drinking Trends research, single-cup makers are found in 41% of US homes and 28% of enterprises. Single-cup brewers were used to making coffee by 26% of past-day users, up from 19% in 2012. Those with children between the ages of 25 and 39 are the most likely to own a single-cup maker. Households with a combined income of more than USD 100,000 possess the most machines.

Demand for organic food and beverages, mainly tea and coffee, is increasing at a faster rate globally as a result of changes in lifestyle patterns, increased spending on food and beverages, increased awareness of healthy foods, changes in meal patterns and existing food habits, and a desire to try new products. The factors mentioned above are fueling the demand for specialty and organic coffee capsules. As a consequence of the installation of coffee machines and the increase in the number of coffee shops, the demand for coffee capsules rises.

The invention of a bio-biodegradable polymer (PLA) to produce compostable coffee capsules, which might be a solution to the world's rising environmental concerns, is generating quite a stir. As a result, premium coffee capsule sales are expected to profit from the introduction of new, organic, and specialty coffees over the forecast period.

Furthermore, clients who are fitness-oriented must consume healthy beverages. As a result, consumer demand for organic coffee capsules is increasing, creating several opportunities for manufacturers to innovate in the industry. In 2019, the Spanish coffee brand Cafés Novell, for example, launched a range of organic coffee capsules for consumption at home and in retail coffee shops. The No Waste line is the first in the UK to provide biodegradable and all-natural coffee capsules.

Coffee capsules are unrecyclable due to their plastic and aluminum content. Despite recycling efforts, plastic and aluminum capsule packaging is thrown. Recycling necessitates the separation of two materials. In a conventional recycling plant, however, this is not possible. Around 300,000,000 aluminum and plastic capsules are used in the UK each year. As a result, the bulk of the area is now occupied by landfills. Due to their elaborate packaging, coffee capsules are difficult to recycle in standard municipal recycling procedures.

As plastic and metal are non-biodegradable, manufacturers are driven to find unique coffee capsule packaging alternatives. Countries are also outlawing the use of portion packaging. For example, as part of a waste-reduction initiative, the German city of Hamburg has banned coffee pods from state-run facilities. As a result, the coffee capsule industry is expected to decline. Manufacturers are creating a packaging alternative with this in mind.

Coffee machines have gained popularity in the workplace due to their multiple benefits. Coffee provides many people with energy and helps them focus on their activities. Employees will also no longer have to leave the workplace to obtain a cup of coffee; they will be able to do so while still working. Coffee is a mild stimulant that speeds up the processes of our brain and body, causing employees to feel more alert and focused.

Customers have been more interested in coffee capsules in recent years as the need for fast non-alcoholic beverages has expanded. Coffee makers use coffee capsules because of their versatility, convenience, and wide range of coffee items and equipment. In addition, the advent of premium coffee shops such as Starbucks has raised customer demand for high-end, freshly brewed coffee. Here are a few examples of recent market developments:

Use of Biodegradable Packaging Methods

Packaging is becoming increasingly important in creating a sensory experience associated with a specific brand or product. The look and feel of a pack influence the consumer experience and can help to drive loyalty. Styling and decorative embellishments lend to an affluent feel and greater shelf presence. Many customers, particularly millennials, want things with concrete benefits and applications. In addition, unusual designs and flexible packaging can be used to create user-friendly options that improve consumption potential.

Convenience is highly crucial to busy customers, as seen by the meteoric expansion of the coffee capsule industry, and people are willing to pay a premium for greater ease of use. Simple features like measured-portion packages and foolproof ways of producing superb coffee combine to make the finest drink ever. Some companies have invested in sustainable packaging techniques to offset the environmental effect of aluminum and plastic packaging on the planet. Demand for biodegradable coffee capsules is expected to grow as customers become more health-conscious and aware of the negative environmental repercussions of coffee pod packaging.

Biodegradable capsules are much like regular single-use capsules that dissolve in water over time. Compostable capsules extend the biodegradable concept by allowing all materials in the capsule to break down and return to the ground quickly. As a result, several companies have introduced sustainable packaging for coffee capsules to gain a competitive advantage. 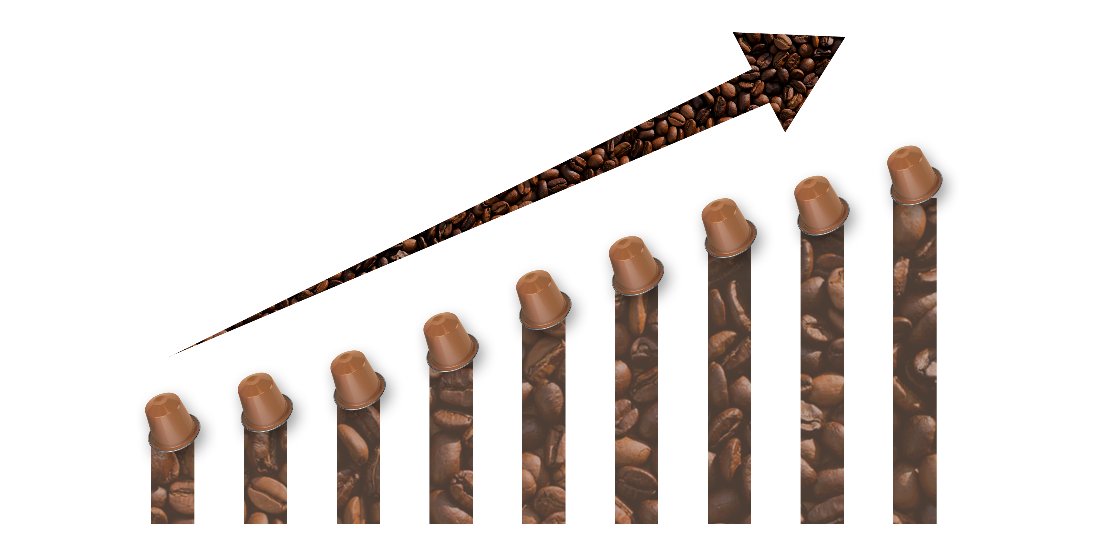 The e-commerce business model may assist industry leaders in developing global ties with local suppliers and logistical providers. Social media helps these businesses lower the cost of entering new markets and marketing their products on a tight budget. It may also result in crowdsourced services and consumer-targeted marketing based on data and purchasing behaviors.

Due to the cheaper rates offered to customers, internet retailing channels for coffee capsules and other coffee goods have increased in popularity. Coffee capsule companies are pouring money into the e-commerce sector as internet marketing becomes less expensive and more successful. According to various estimates, the number of orders for coffee capsules climbed by 53% in the past year and accounted for more than half of all coffee orders done online. In the United States, internet sales of coffee capsules are dominated by Nespresso and Keurig's K-Cup.

Recycling plastic capsules is still tricky since they cannot be thrown away intact, resulting in significant waste creation. As a result, they are incredibly harmful, and disposing of them has become a critical matter.

Influential rivals in the studied industry, on the other hand, are actively developing the category to obtain a competitive edge. In 2020, for example, Nespresso produced its first coffee capsule made of 80% recyclable aluminum. In March, these capsules were made from 95% recyclable material. Furthermore, Nespresso wanted all machines delivered in this new packaging by the end of 2021, which boosted the capsule market development.

In order to increase their collection and recycling systems, companies are developing various agreements and partnerships to recycle aluminum capsules. Nespresso, Nestlé, and JDE (Jacobs Douwe Egberts) launched the Alliance for the Recycling of Aluminium Capsules in France in 2019.

Germany, the United Kingdom, France, Russia, and Spain contribute the most to the market revenue of coffee capsules in Europe. Germany is Europe's largest importer of green coffee beans, and the coffee roasting industry is vast, allowing the country to service domestic and international markets. Nestle's Nespresso leads the German coffee capsules sector with nationwide product distribution.

Coffee firms aim to grow their operations in Asia-Pacific and South American nations. As consumers are exposed to freshly-brewed coffee at specialty coffee cafés, they are enticed to have the same fresh sensation at home, with retail value sales of coffee capsules skyrocketing.

Traditional drip machines have declined in recent years, but automatic espresso and capsule machines have gradually risen and gained market share in China, which is primarily a tea-drinking country. Capsules are one of the most important growth drivers for coffee in Australia, contributing to a significant increase in value sales.

Asia-Pacific, the world's second-fastest-growing coffee market with the lowest per capita spending, has several growth opportunities. With the rise of specialty cafés and rising income, Asia-Pacific highlights the potential of capsules. Due to Japan's aging population and busy lifestyles, consumers choose single-serve and simple solutions for in-home coffee consumption, as they spend less time preparing meals and drinks.

Many small and medium-sized coffee producers are investing in capsules in anticipation of increasing demand. They often work with private label companies like Kaffa Café Brasil to roast and package their coffee in Nespresso-compatible capsules. Nestlé also built a Nescafé Dolce Gusto factory in Southeast Brazil in 2015. It is the first Nescafé Dolce Gusto capsule production factory outside of Europe, underlining Nestlé's confidence in the country's and Latin America's growing coffee demand.

Some of the major players in the global coffee capsules market are:

( 0 ) Thought on "An Insight into the Widespread Coffee Capsules Industry"

Plant-Based Meat: A Delicious Way to Be A Part of Growing Veganism
View More Articles
Would you like view Food & Beverages related reports ?
Report