Wi-Fi Calling and its Future in India 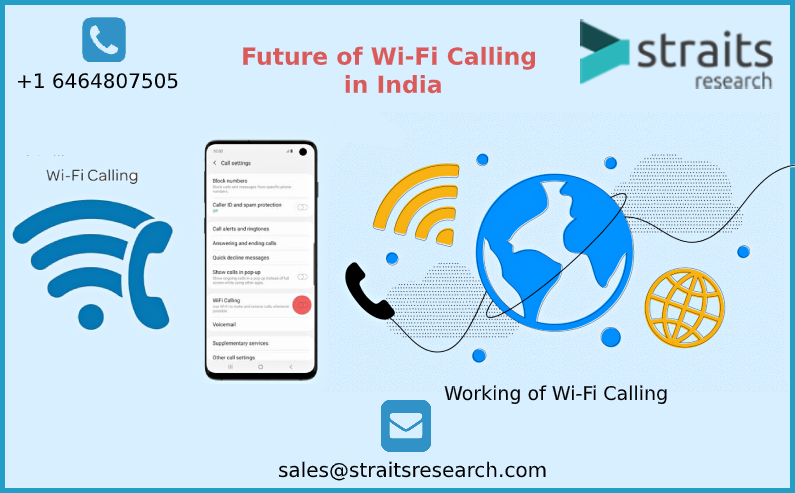 A year ago, Google announced that Google Fi or Project Fi will be launched on iPhones, Samsung, and OnePlus handsets. For a service that was once supportable in only a few handsets, this is a prominent achievement for the organization's Wi-Fi first network.

Yet, making a Wi-Fi call on a handset is nothing unheard of. The ability to call a person over Wi-Fi rather than over a cellular network has been around for quite a long time, with Skype being one of the foremost and oldest mainstream applications to do so.

Just like carrier technology keeps on advancing, so does Wi-Fi calling. The fact that a number of third-party apps are entering the market to take on Skype–including, but not limited to, WhatsApp and Messenger–phone makers themselves are including this feature with native apps, such as Google Duo and FaceTime.

There are additionally cellular networks that prefer Wi-Fi calling first, similar to Google Fi (as mentioned earlier) and Republic Wireless, which offer users less expensive options in contrast to ordinary phone plans. To rival this, legacy carriers that once preferred conventional cellular technology have moved to Wi-Fi calling as well. Regardless of whether it’s because they wanted to reinforce their network coverage or improve client experience, T-Mobile AT&T, Verizon and Sprint sell handsets that support Wi-Fi calling.

To assist you with a complete understanding of what Wi-Fi calling is, the reason it's important, and what you can use it for, here's everything you need to know about the service.

Rather than making a call over the cellular network, your phone can make a voice call by means of connecting to a Wi-Fi network. This is the same Wi-Fi connection over which you stream everything, or whatever Wi-Fi hotspot you happen to be on when you're out, for example, at a bistro or library.

WiFi calling allows you to make phone calls over Wi-Fi, i.e. a wireless internet connection. It doesn't go through a conventional telecom provider like AT&T or Verizon. Also, Android and iOS handsets presently have acknowledged, universal standards (APIs) for VoIP calls in a way that is better for battery life and the user experience.

The Working of Wi-Fi Calling

To put it in simple words, Wi-Fi calling can be made through a VoIP (Voice over Internet Protocol) system. In order to establish a call, the carrier reaches over the internet connection. In fact, there’s a lot happening under the hood to make the call possible, but to us, it appears effortless.

VoIP technology has previously been used by a number of apps such as Skype and Facebook-owned WhatsApp and Messenger. Now that these devices support Wi-Fi calling, users no longer have to rely on traditional cellular network connections. Nextiva is an app that can be used to make WiFi calls in users’ devices, irrespective of cellular connection.

The Charges Associated With It

It's a great alternative for people working abroad. You don’t need expensive international schemes for making calls across the border. You're essentially using data from your monthly allowance to make international calls. As a matter of fact, over 100 million voice calls are made on WhatsApp every day. Moreover, experts anticipate that there will be 542 million hotspots worldwide by 2021, all supporting WiFi calls.

Wi-Fi Calling: It's Future in India

WiFi calling makes it possible for users to make active calls over a private or an open WiFi network to any portable or landline number. The service intends to improve calls in regions with weak cellular networks yet stable WiFi connection. It is not the same as voice calls made over WhatsApp or Facebook Messenger. What truly happens in Wi-Fi calling is that your voice gets connected to your mobile carrier’s network using the internet instead of cell towers.

While there has been a surge in the calling prices, Airtel guarantees that there will be no additional charge for calls made over 'Airtel WiFi Calling.'

Unfortunately, not every Airtel customer can use the feature as you need to have a smartphone that supports voice calls over a WiFi network.

Be that as it may, sadly, not all Airtel clients can utilize the administration as you need a cell phone that supports WiFi calling. There is only a select number of handsets that support this feature in India, including:

This service is only compatible with the Airtel Xstream Fiber home broadband, implying users need to have this broadband network if they want to avail Wi-Fi calling. Even though the telecom provider says that it will soon avail the service to all broadband networks and Wi-Fi hotspots, the exact date is not known. Moreover, the service might not be consistent until you're using a private WiFi network; because even prime markets like Delhi/NCR are not covered, particularly in the event that you wish to make a WiFi call using public hotspots.

Airtel's rival Jio was the first to roll out VoLTE in the nation, and it has additionally been working on Vo-WiFi services covering states such as Madhya Pradesh, Telangana, Andhra Pradesh, and Kerala. While Airtel is the first telecom provider to roll out this service but, the most it has accomplished now is being the first to do a business rollout, however, nothing is known about its expansion, reach, compatibility, and the exact date of the launch.

Randeep Sekhon, CTO of Bharti Airtel said: “Along with improving the quality of calls in low-signal regions, Wi-Fi calling will eliminate the problem of increasing the volume of telecom towers in dense areas.”