Pemetrexed disodium is a chemotherapic drug used in the treatment of malignant pleural mesothelioma and non-squamous non-small cell lung cancer (NSCLC). The generic version of the drug is named as Pemetrexed.

Pemetrexed is manufactured by Eli Lilly and Company for the treatment of malignant pleural mesothelioma and non-squamous non-small cell lung cancer (NSCLC). Eli Lilly and Company has patented the drug as Alimta, a vitamin regimen patent in the U.S. and Europe. Whereas, the patents for the compound in the U.S. and Europe were expired in January 2017 and December 2015 respectively. Being one of the most effective and widely used drugs, a number of companies have developed a generic version of the Pemetrexed and gained approval from regulatory bodies. For instance, in 2018, STADAPHARM GmbH launched a generic version of Alimta (Pemetrexed STADA) in Europe. Moreover, in 2017, Eagle Pharmaceuticals Inc. received the U.S. Food and Drug Administration tentative approval for its diluted version of Eli Lilly and Company blockbuster cancer drug Alimta. Eagle Pharmaceuticals, Inc. and Stada Arzneimittel AG are some of the other players engaged in generic medicine. In 2017, the global pemetrexed market was valued at USD 2,062 million.

The report, at first, introduces the global pemetrexed market including application and industry chain overview; Then, it deeply analyzes the global market by segmental and regional perspective.

In addition, the report includes a detailed pipeline analysis, recent market scenario, and cost-effective analysis of the pemetrexed with respect to other available drugs. Next, the report focuses on pemetrexed market’s competitive share analysis, company profiles, and analyst conclusion. Cumulatively, the report covers an in-depth research study on the global pemetrexed market, thanks to the market technical and marketing experts for their valuable support and assistance during this study. 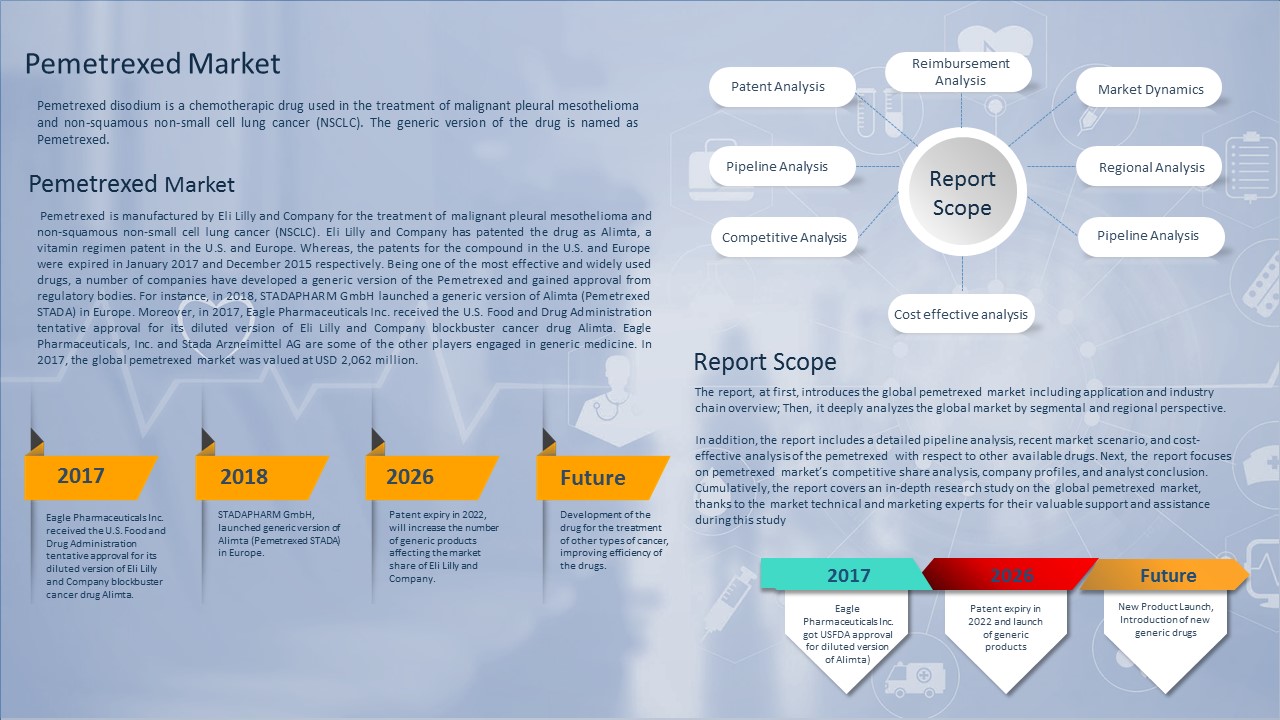