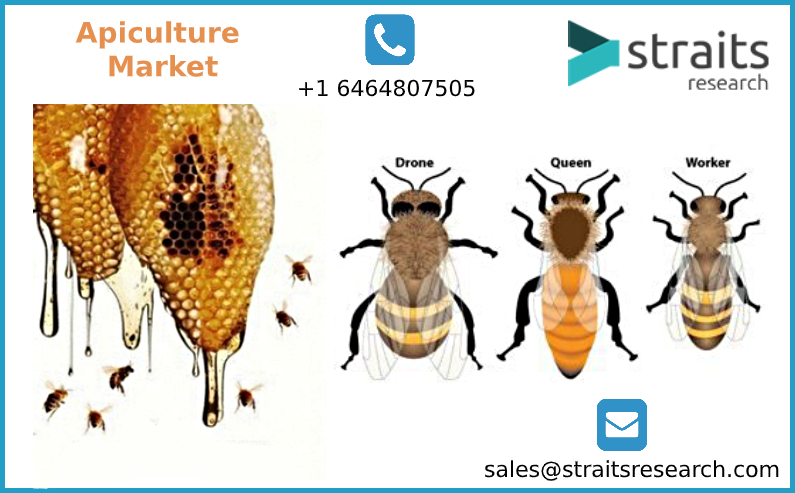 Apiculture is experiencing significant growth at present. The beekeeping industry involves raising bees, honey collection, and other beekeeping activities. It is one of the major sources of income for small scale farmers and enterprises in many developing countries. In addition, several governments are supporting the industry by offering incentives and monitory benefits to create employment in the region as it does not require heavy investment. For instance, for the export and import of lives bee, European Commission developed and enforced guidelines such as trade in animals and related products regulations (Northern Ireland) 2011 and The Bee Diseases and Pests Control Order (Northern Ireland) 2007.

Food and beverages segment is capturing largest market share and was valued at USD 4,021.1 million in 2018

Application segment comprise of Food and beverages, pharmaceuticals, cosmetics and others. Beekeeping industry has been providing many products, which have applications in the food and beverages industry. Beeswax is widely used as a glazing agent in the food industry to provide a waxy protective surface on food products. It is being preferred over chemical agents due to its natural status and being promoted by governments worldwide. It has been regarded as healthier by European consumers and has been authorized by the European Union to be used as a glazing agent in confectionery, small products of fine bakery wares coated with chocolate, snacks, nuts, and coffee beans. In addition, organic beeswax market and has already gained pace to be used in food applications, owing to its high demand in high-income countries.

In the last few years, Asia Pacific has registered remarkable economic success in the apiculture industry. In 2018, Asia exported around 39.6% of the world’s honey, the European Commission. China is the largest producer and exporter of bee products worldwide. Rapidly developing Chinese economy and its beekeeping industry with million managed bee colonies plays an important role in world trade. For instance, China accounted for around 40% of EU honey imports in 2018, European Commission. Honey production is a booming industry in China and provides employment to a large population. To keep the demand for home-grown honey growing internationally, the government has legislated stringent hygiene regulations. The government has introduced strict labeling and packaging of products to counteract fake products. Australia is the fourth largest exporter of honey globally, and its beekeeping industry is one major contributor to the economy. For instance, Australia produces around 20,000–30,000 tons of honey annually with over 1500 commercial beekeeping businesses, the Bee Aware Organization. Furthermore, the on-going international success of manuka honey is driving the growth of the total New Zealand honey industry. Country’s honey exports are on a roll in the last few years, and it increased by 35% in 2016, the Apiculture New Zealand Organization. This has encouraged a lot of people in the region towards the beekeeping industry, which has resulted in the increasing number of registered hives.

Apiculture industry is expected to generate several waves of consolidation, leading to exciting industry future prospects. This consolidation will be driven by increasing investment and research and development activities. For instance, the partnership between New Zealand's largest honey producer and exporter, Comvita, and rural investment company MyFarm is an apt example. Comvita has agreed to provide improved Manuka cultivars to plant approximately 1,650 hectares of North Island hill country for an investment partnership arranged and managed by MyFarm Investments Limited.