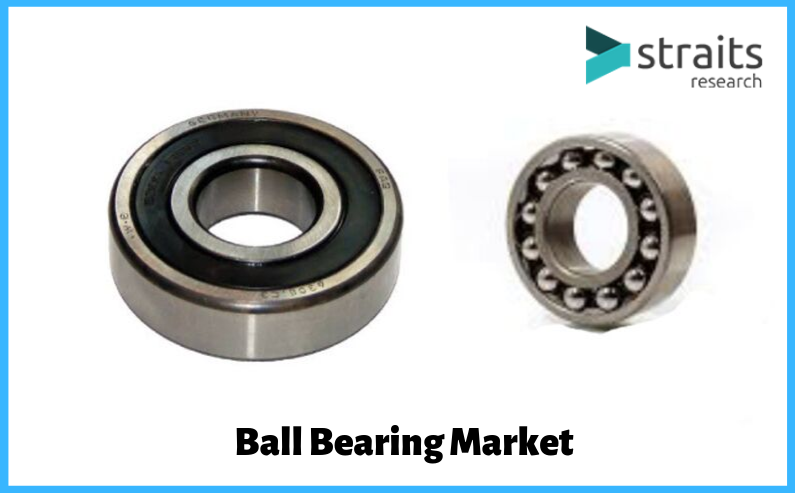 Ball bearings reduce friction and improve efficiency by minimizing frictional contact between machine parts. They allow linear or rotary movement between two surfaces. A ball bearing consists of several steel balls sandwiched between a stationary outer race and spinning inner race. The sides often have shields or seal rings to retain the grease and keep the bearing as clean as possible. A ball bearing carries loads along its axis of rotation or perpendicular to its axis of rotation. Thrust bearings are the bearings that carry loads along the axis of rotation and bearings carrying loads perpendicular to the rotational axis are called radially loaded bearings. Ball bearings are usually used for small to medium size loads and are suitable for high-speed operation.

Asia-Pacific is expected to witness the fastest growth in the ball bearing market during the forecast period, 2019–2026. Countries such as China, India, Japan, Taiwan, South Korea, and Singapore are observing developments, prompting applications in various sectors, including railways, automotive, and wind energy. Additionally, owing to the availability of cost-efficient labor and raw materials, companies from developed countries in regions such as Europe and North America have started establishing their operations in APAC. This increase in manufacturing activities will also contribute to the industry’s growth in this region.

North America is anticipated to observe favorable growth during the forecast period (2019–2026), owing to the increasing production of vehicles and massive investments in automotive innovation in the region. According to the International Trade Administration (ITA), the U.S. exported 1.8 million new light vehicles and 131,200 medium and heavy trucks, valued at over USD 60 billion, to more than 200 markets around the world.

Europe has been one of the leading producers of automobiles in the past and is anticipated to remain a prominent region during the forecast period. The region’s significant automotive sector is expected to provide impetus to the ball bearing market.

The ball bearing market is bifurcated by type and by end-use. Based on type, the market is segmented into deep-groove, angular contact, thrust bearing, and self-aligning. Deep groove ball bearings are widely used to support high radial load and moderate thrust load. Angular contact bearings carry radial and axial load depending upon the magnitude of the angle of contact. Self-aligning bearings are used for the assembly of shaft and housing. They are also used in top drafting rollers and the main shaft of the ring-spinning machine. Bearings with a contact angle higher than 45 degrees are called thrust bearings.

Based on end-use, the market is segmented into process industries (general industries, mining, energy, construction, metal, cement, pulp/paper, and defense), and transportation (passenger cars, commercial vehicles, railways, civil aerospace, and others).  Ball bearings are used in the rotary manufacturing units of various process industries, where radial load is to be handled. Passenger cars, commercial vehicles, and others use ball bearings in the engine to rotate shafts.