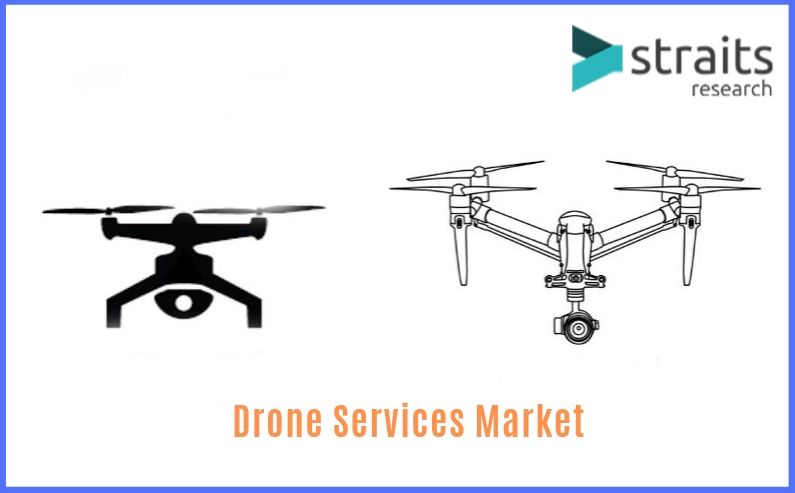 The global drone services market is expected to grow at a rapid pace by dint of increasing adoption of advanced technology solutions across various industry verticals. Drone applications provide a wide range of benefits — sensor logic and other functionalities, influencing the drone services market growth. Moreover, the growing demand for survey drones and the embracement of drones in the agriculture, oil & gas industry, infrastructure, and others are driving the market growth during the forecast period. Additionally, capabilities of drones as a service with the game-changing technologies that enable supplying medical aids in remote areas, package delivery, and others, are further influencing the demand for drone services market.

Mapping and surveying solution provides efficient survey data by capturing photographs and thereby creating views of the maps, exposure to details such as crop health, lack of nutrients in the soil, and others. For instance, in February 2019, the Survey of India and the Government of Karnataka signed a Memorandum of Understanding (MoU) to resurvey land and properties using Drones in Karnataka aiming to provide farmers and citizens complete land records in a time-bound manner.

The Aerial photography & remote sensing segment and the data acquisition & analysis segment are collectively expected to hold strong share in the global drone services market. On account of the growing demand for drone services such as remote sensing, photo & videography, and others are expected to fuel the drone services market in the segment. Further, broadcast news organizations plan on leveraging the video drone technology delivering dynamic aerial imagery for broadcasting live news. For instance, in July 2017, CNN Aerial Imagery and Reporting was granted a Part 107 waiver by FAA to fly unmanned aircraft systems (UAS) for closed-set motion picture and television filming.

North America is expected to witness significant growth in the global drone services market by dint of technologically powered developed economies such as the U.S. and Canada. According to the Association for Unmanned Vehicle Systems International (AUVSI), the unmanned aircraft industry is anticipated to grow with an estimated economic impact of around USD 82 billion with 100,000 jobs in the U.S. Moreover, embracing government initiatives and the need for improved yield productivity are the factors fueling the demand for the market in the region.

Asia-Pacific is expected to experience considerable growth in the drone services market due to adoption of drone technology in the agriculture field for assessing remote filed areas such as rice fields and fruit plantations in the mountain region, among others. According to the Australian Trade and Investment Commission (Austrade), there are over 1200 drone operators emphasizing on technologies and services to expand the drone ecosystem. Australia is expected to flourish as the hub for Beyond Visual Line of Sight (BVLOS) testing. The country is a significant producer of several agricultural products. Thereby, adoption of such technological advancements in the field of agriculture for field analysis will augment the demand for drone service market in the near future.