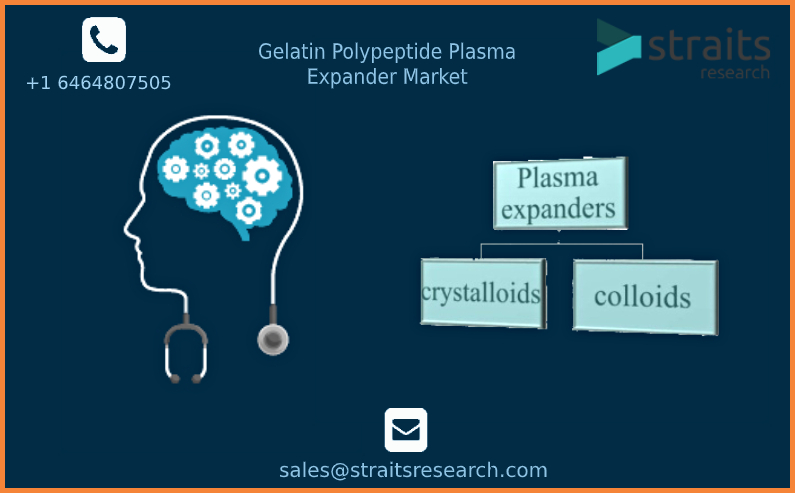 Volume expanders are extensively used in orthopedic, hepatic, and vascular surgeries daily. It is also used in emergency or critical situation involving blood loss. In 2013–2014, around 4.7 million surgical admissions were conducted in the U.K., out of which, 1.3 million were for trauma and orthopedic surgeries, the Royal College of Surgeons of England. Gelatin is a mixture of peptides and proteins extracted from skin, bones, and connective tissues of animals. It is widely used in plasma expander applications. For obtaining gelatin, the manufacturers must follow strict safety and hygiene guidelines. Rousselot, a leading manufacturer of high-grade gelatin, offers gelatin from both bovine and porcine skin.

Based on source of gelatin, the gelatin polypeptide plasma expander market is segmented into bovine and porcine. Most of the commercialized gelatin polypeptide plasma expanders use bovine as a source of raw material, which makes it the largest revenue generator. Bovine derived gelatin is categorized into type B gelatin, extracted by alkaline process. Alkaline process of extraction is effective and reduces chances of interference with other ingredients, which makes it most preferred choice in plasma expanders. Bovine is majorly used as a raw material in most of the gelatin plasma expanders including Geloplasma, Gelofusine, and Haemaccel.

Asia Pacific is housing over 4.4 billion people. The region offers relatively good healthcare interventions at a low price and contributes the most to the global disease burden. In Japan, Australia, and South Korea, a huge population is dying from cancer, heart disease, diabetes, and COPD. In Asia Pacific, many countries have increased their healthcare spending for providing better healthcare facilities. Developed countries are well-known for established, multi-billion-dollar healthcare infrastructure, and the countries are also homing a huge number of renowned medical practitioners. For instance, in 2016, around 1.8 million physicians were practicing in Europe. In addition, several governments in the region are investing heavily in the healthcare sector. In Canada, total healthcare expenditure was valued at USD 253.5 billion in 2018, representing 11.3% of its GDP, the Canadian Institute for health information. Governments in low-income countries have also increased their healthcare expenditure to support healthcare facilities. Despite many challenges, Brazil, Argentina, and Mexico have managed to provide decent medical facilities in the region. According to the World Health Organization (WHO), Brazil offers one of the best medical services in Latin America. It has over 43 hospitals with expert surgeons. These are driving the growth of the gelatin polypeptide plasma expander market.

By Source of Gelatin