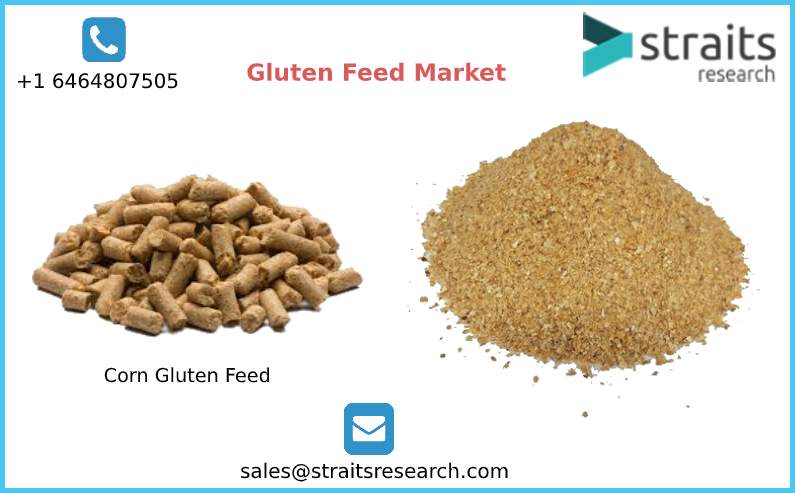 Gluten feed is given to dairy & beef cattle, poultry, and others as it is rich in protein, which is highly valued by the pet food industry and aquaculture industries. As per the U.S. Grains Council, corn gluten feed (CGF) and meal (CGM) are the highly nutritious co-products of the wet-milling industry. The increasing prices of conventional feeds, such as corn and soybean meal have made the beef producers explore alternative protein options. Recently, increasing access to local grain processing plants has promoted the use of corn by-products in cattle production systems worldwide.

Application segment comprise of livestock, poultry, aquaculture and others. Livestock involves raising domestic animals in an agricultural setting to produce commodities such as meat, eggs, milk, fur, leather, and wool. Gluten feed is used as a feed additive in cattle diets as a source of energy and protein. Due to increasing feed consumption worldwide demand of gluten feed for livestock across the globe is also increasing, thus, driving the growth of the market? Global demand for livestock is creating opportunities for major exporters to increase their product penetration and share in the key markets. Poultry sector is the second leading segment, increasing poultry exports are driving the demand of the market. Fr instance, in 2018, Chicken meat exports were 4% higher in the U.S., the United States Department of Agriculture.

In Asia, China is dominating the gluten feed market owing to its well-established livestock industry

China is the world’s largest swine, aquaculture, and egg producer. Also, it is the second largest poultry meat, corn ethanol, and dairy and beef producer. Increasing preference for consuming more animal protein in urban residents is driving the demand for gluten feed in the country. Meat consumption in China grew hugely in the last few years. This can be attributed to growing number of the urban middle-class population adopting western diets such as burgers and steaks, which have favoured the meat consumption further. A trade war between the U.S. and China is also favouring the use of alternative protein sources for animal feed as imports tariffs have been increased. China is the world’s second beef and seventh largest broiler meat importer. As per the USDA-FAS Report, in 2018 China’s beef and broiler meat imports increased to 11 and 7%, respectively. In addition, China’s domestic beef production grew by 8%. Increasing meat production is driving demand of gluten animal feed. Livestock is the fastest-growing segment in the agriculture sector offering many potential opportunities for economic growth. This growth could directly benefit poverty in rural areas. The social and economic benefits contribute to economic growth, especially in economies where agriculture contributes significantly to GDP. India is one of the largest producers of milk globally. As per Ministry of Agriculture & Farmers Welfare 2017, milk production during 2015-16 was accounted for 155.5 million tons, exhibiting an annual growth of 6.27%. in addition, India is also the second largest producer of freshwater fish in the world. Major challenges to maintain healthy livestock in the country are animal diseases, shortage of feed and fodder, skills and quality services to farmers for improving productivity need to be addressed. Indian animal feed industry is experiencing pressure with the increasing prices of maize, corn and soya and severe droughts in the region.

The market is currently fragmented, and the degree of fragmentation will increase during the forecast period. Manufacturers are focusing on various strategies to strengthen their position in the market. Ingredion Incorporated, Archer Daniels Midland Company, Tate & Lyle and Cargill Incorporated are some of the major manufacturers in the market. The companies are carrying out various growth strategies, such as Cargill Incorporated invested USD 15 million in the construction of animal feed mill in Punjab, India to increase its production capacity. The mill would have animal feed production capacity of 12,000 metric tons per year.