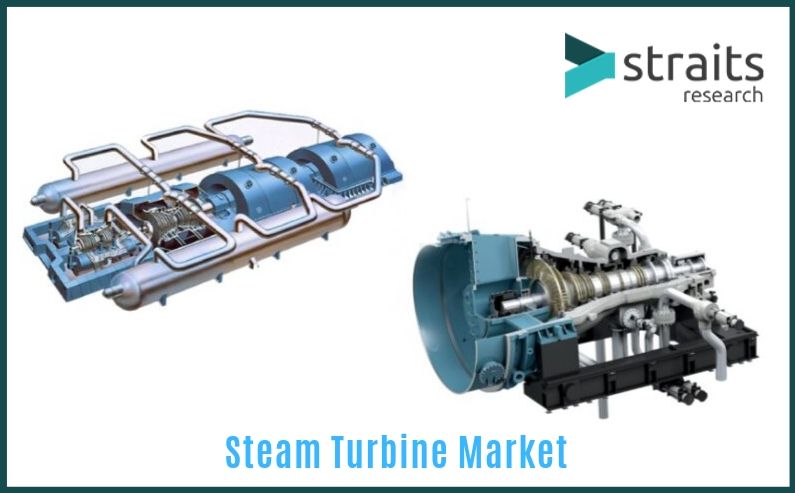 Steam turbines are among the oldest and most versatile prime mover technologies wherein the mechanical devices convert thermal energy contained in the steam to mechanical energy or electrical energy. The major components of a steam turbine are boiler (steam generator), condenser, turbine, feed pump, and a variety of auxiliary devices. As a turbine produces rotary motion, it is principally suited for driving electrical generators. According to the U.S. Energy Information Administration (EIA) in 2017, 20% of U.S. electricity was generated through nuclear power plants using steam turbines from nuclear fission. Steam turbines have been in application for more than 120 years as they replaced steam engines on account of their superior efficiencies and reduced costs. Coal is the primary source of energy used in powering these plants, which have raised many environmental concerns in today’s world. Therefore, most developed countries have started substituting coal-powered plants in steam turbines with more cleaner options, including renewable energy sources, gas, and fuel cells.

The focus of major steam turbine manufacturers such as Siemens and General Electric to develop CCPPs capable of meeting stringent government norms on carbon dioxide emission are expected to promote global steam turbine market growth during the forecast period. For instance, the 50Hz CHP CCPP steam turbine developed by Siemens is being used in the construction of the Lausward plant in Dusseldorf, Germany. This highly advanced CCPP technology would help in meeting the region’s power requirements by extracting about 300 MW heat to support the city's district heating system as well as achieve about 85% fuel efficiency.

The Asia Pacific steam turbine market is expected to grow with the highest CAGR of 3.9% during the forecast period, 2019–2026, owing to the presence of a large number of companies in the region. India’s total installed generation capacity is projected to increase from 154.7 GW in 2007 to 345.5 GW by 2040 on account of rapid industrialization and urbanization across the region. China is considered to have the most diverse industrial production sector across the globe. For instance, China’s industrial output expanded to reach around 6.6% in 2017, as compared to 6% in 2016.

North America is the second largest market for steam turbines and is expected to grow at CAGR of 2.9% during the forecast period, owing to the substantial demand for power and energy. Moreover, power generation companies in the region are heavily investing in renewable energy sources instead of traditional sources, which is fuelling the industrial steam turbine market growth further. According to the U.S. Energy Information Administration, approximately 4,034 billion kilowatt-hours (kWh) (or 4.03 trillion kWh) of electricity was generated in 2017 at utility-scale facilities in the U.S. Thus, the increasing use of electricity in various industrial sectors is projected to drive regional market growth.

Europe is experiencing sluggish growth due to the declining use of coal for power generation. For instance, in January 2018, the U.K government announced plans to cease electricity generation in coal plants. Three plants have already been shut down in 2016, whereas most of them are expected to halt operations by 2022 due to new pollution standards.

South America is expected to hold a substantial market share during the forecast period, 2019–2026. Sudden economic growth and ever-increasing population are expected to drive the demand for electricity in coming years. In order to meet this growing demand, production capacity is required to be expanded across the region. The use of steam turbines, mainly through combined-cycle power plants, has become the primary option for countries in South America. According to the U.S. Energy Information Administration, Brazil generates the third-highest amount of electricity in the Americas. Additionally, in 2016, Brazil installed an electricity generation capacity of 137 gigawatts (GW) and generated 560 billion kilowatt hours of electricity.

The global steam turbine market can be segmented by type, application, and region.

Steam turbines are well suited for medium and large-scale industrial processes in dozens of institutional applications. They are an integral part of a number of industries such as power & utility generation, marine, industrial, and others.  Steam turbines are extensively used in an array of industries such as chemical, sugar mills, oil & gas, waste plants, and others as they offer high efficiency in terms of power generation. In the marine industry, turbine generators are a popular source of clean power generation on ships as they don’t use any sort of diesel or heavy oil. Steam is an easily available, environment-friendly, and affordable form of fuel on ships for power production.