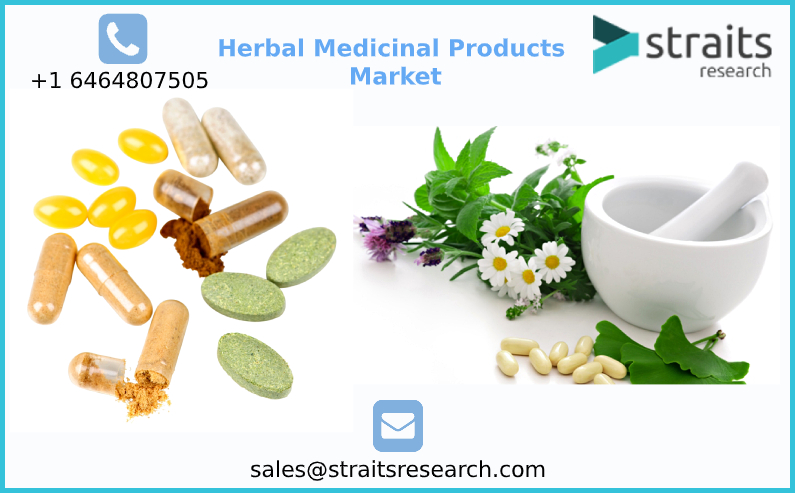 The demand for traditional medicines is increasing gradually in western countries due to the ongoing trend of healthy lifestyle and consumption of natural ingredients to ensure fewer or no side effects. As per the estimation by the WHO, the international market for herbal products is expected to reach USD 5 trillion by the end of 2050. India and China are witnessing momentum in herbs and herbal products. According to the report by the Natural Products Chemistry & Research, Indian exports of aromatic and medicinal plants have nearly doubled between 2010 to 2014. For instance, according to the Ministry of Commerce and Industry of India, in the year 2017-18, the exports of herbs were valued at USD 330.18 million with a growth rate of 14.22% as compared to 2016-17.

Extracts segment is growing at a significant CAGR of 7.8% during the forecasted period 2019-2026

Formulations segment comprise of powder, syrup, ointments, oils, extracts and others. Extracts segment is expected to grow at a CAGR of 7.8% during the forecasted period 2019-2026. Extracts have a spectrum of applications treating diseases, including neurological disorders, cardiovascular diseases, cancers, and others. Apart from this, other herbal formulations are contributing significantly to the market. For instance, herbal medicinal powders are generally used for treating constipation and as antiseptic & antimicrobial for external injuries. According to the American Gastroenterological Association, every year, more than 16% of total Americans suffer from chronic constipation and 700,000 Americans visit the emergency department

In Asia, traditional medicine has persevered since centuries. Strong roots are the biggest contributing growth factor for the herbal medicinal products market

Global herbal medicinal products market by Americas, Asia Pacific, Europe, and the Middle East and Africa. Europe accounted for the largest share in 2018.

A huge population follows traditional medicinal approaches in the region, alongside western medicines; in China, traditional medicine (TM) accounts for around 40% of all healthcare delivered and treats around 200 million patients annually, as per the WHO. In recent years, China, Thailand, Indonesia, and Vietnam have witnessed double-digit growth in the herbals market. For instance, in 2015, TCAM in China accounted for 16% of total medical care, up from 14% in 2011, as per the WHO. Moreover, an increasing number of national TM research institutes in Asia-Pacific is a positive sign of the growing trend of traditional medicine; many universities in the region are offering full-time TM degrees in Australia, China, Japan, the Republic of Korea, and Vietnam, as per the WHO.

Many investors are taking an interest in traditional medicine and offering new opportunities for the market on an international level. For example, Gorkha Ayurved Co., a joint venture between Nepalese and French investors, has gained around 6% of the domestic market for herbal products, as per the World Trade Organization (WTO). Apart from these, traditional medicine has expanded its footprint to supermarkets, pharmacies, and convenience stores. Vingroup, one of Vietnam’s largest conglomerates, recently entered the pharmaceutical business with Vinfa, with a focus on the preservation and research of Vietnamese herbs in traditional oriental medicines

This market is fragmented in nature, dominated by big players along with small regional players. Direct sales, partnership, and new product formulations are the key strategies to gain competitive edge in the market. Investment Research and development of new product formulations is highly prominent among players. For instance, Arkopharma, invests around 8.5% of its revenue into R&D. in addition, partnering with other players to penetrate international markets has also benifitted big regional giants. For instance, Tsumura, has been developing its TU-100 (Daikenchuto) since 2008