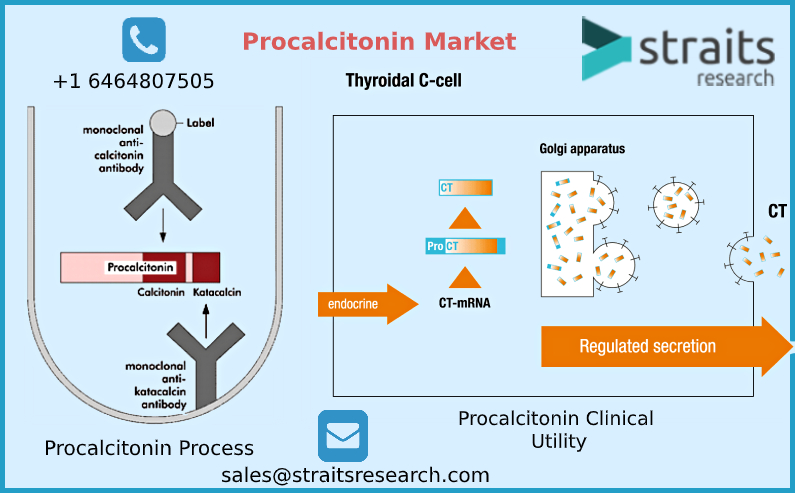 At present, symptoms of sepsis and clinical research approaches including drugs and supportive care are well known, but it remains a serious health problem. As per the global epidemiological report, around 19.4 million people are affected by severe sepsis, and 31.5 million people are affected by sepsis. In addition, around 5.3 million people die from sepsis each year worldwide. It has been estimated that the U.S spends USD 16.7 billion on sepsis treatment annually. Therefore, this life-threatening disease is one of the high-cost drivers from hospitals and society’s outlooks.

Introduction of the blood infection marker ‘procalcitonin’ for discriminating viral and bacterial infections has gained immense popularity in the last decade. Additionally, it helps the physician to prescribe and identify the duration of antibiotic therapy. Acute respiratory tract illness due to overuse of antibiotic is one of the leading causes of adult hospital admissions and death worldwide. However, several studies had reported a significant reduction in antibiotic exposure when procalcitonin was used to guide decisions about initiation of antibiotics in low-risk patients such as patients suffering from bronchitis and duration of treatment in high-risk patients such as pneumonia. In addition, it is a cost-effective solution, which can ease the increasing pressure on global health care budgets.

Research application segment is growing at a CAGR of 14.1% in the forecast period

Procalcitonin assay assists the clinicians in determining the drug and avoid prescribing antibiotic when a bacterial infection is not identified. FDA has approved the test for guiding antibiotics use in patients having respiratory infections or sepsis. A lot of researches have shown the importance of PCT tests for different clinical applications such as intrauterine infection diagnosis, which is the most common cause of mortality in neonates. Studies have shown that early diagnosis significantly reduces the risk of death from infection. In addition, many studies have observed the usability of PCT in acute meningitis.

Sepsis is one of the major causes of mortality in Asia pacific. Australian Sepsis Network has estimated that the annual incidence in the adult Australian population treated in ICU corresponded to more than 15700 new cases and around 5000 people die of sepsis in Australia every year. The increasing prevalence of sepsis results in prolonged hospital stay, which attracts high treatment cost. As per the George Institute for Global Health and the Australian Sepsis Network, overall sepsis treatment costs USD 846 million in Australian ICU annually. Lack of awareness is a prominent factor for the rise in sepsis related deaths. For instance, in 2016, a national awareness survey found that 60% of Australians did not know sepsis, and only 14% could name one of its symptoms. Moreover, Asia Pacific region is an unexplored territory and offers numerous opportunities for the procalcitonin market players.