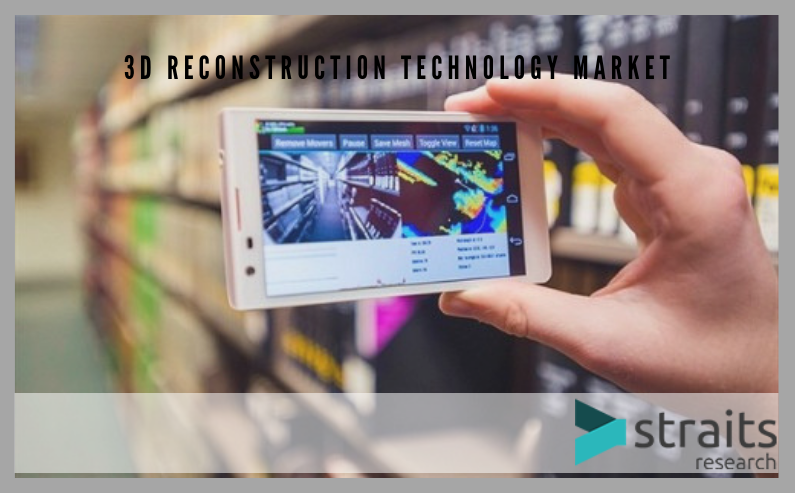 In computer vision, 3D object reconstruction is the process of recreating the shape and appearance of an object. The technology finds extensive application in medical and video surveillance equipment, survey of underwater objects such as biological species and ancient shipwrecks, and video simulation and mapping. Globally, 3D reconstruction technology is pegged to witness sound growth during the forecast period as it has an array of applications in consumer products, industrial products, defence & aerospace, automotive and healthcare industries, among others.

The 3D reconstruction technology market has been segmented on the basis of construction method, type, application, and geography.

On the basis of construction method, the market has been segmented into active and passive. The active technique is widely used, due to its ability to reconstruct an object’s entire surface in every condition.

On the basis of type, market is segmented into software, images and video, and 3d scanning. Software segment is likely to be grow at highest growth rate owing to its increasing use for medical practices and video surveillances.

On the basis of application, market is segmented into culture heritage and museum, films & games, 3d printing, computer aided geometric design (CAGD), and digital media. Film and Games segment is expected to experience the rapid growth, due to increased demand for 3D technology in the games and films.

On the basis of geography, the 3D reconstruction market has bene segmented into North America, Europe, Asia Pacific, and LAMEA.

Among all regions, North America is expected to account for the largest market share in the 3D reconstruction market during the forecast period, which can be attributed to the region’s well-established infrastructure and early adoption of technologies in countries such as the U.S. and Canada.

Asia Pacific is likely to emerge as the fastest growing region in the 3D reconstruction market, as the region is emerging as a manufacturing hub with high adoption of technology.

New vendors functioning in the market are confronting challenges because of the intense competition from well-established players, as they grapple with consistency, technological developments, and inconveniences.

In November 2017, Autodesk Inc. partnered with geospatial software company, Esri for new technologies that will allow cities to gather insights based on real-world modelling and virtual environments.