Sleeping Pills Market Trends Expected To Grow At a CAGR of 4.8% 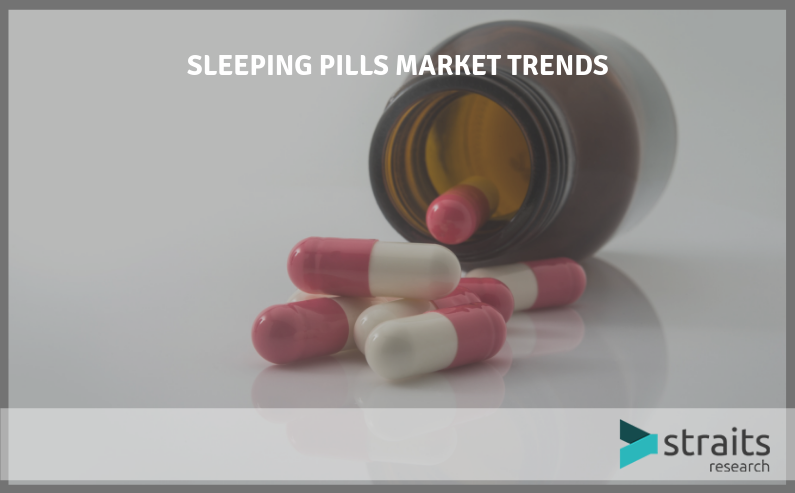 Insomnia is a common problem faced by the people who find difficulty in falling asleep. Over 10% of American adults are suffering from insomnia. Increasing prevalence of sleep disorders owing to obstructive sleep apnea and restless leg syndrome is expected to drive market growth. As per Johns Vein Centers, around 2%–3% of US adults have restless leg syndrome in 2018. Moreover, rising work stress and shift work sleep disorder are another factor for fueling market growth.  Furthermore, presence of undiagnosed insomnia population and high prevalence of sleeping disorder in geriatric population is propelling the market growth. Furthermore, number of drug approve for sleeping pills disorders is also growing demand for sleeping pills. For instance, FDA has approved generic drugs such as eszopiclone and zaleplon for sleep disorders. Every year, the U.S. witnesses a subsequent economic loss of USD 411 billion on the treatment of sleeping disorders.

Rising Prevalence of Insomnia to Lead the Market Growth

By sleep disorder, the market is segmented into insomnia, sleep disorder, restless leg syndrome narcolepsy, and sleep walking. Currently, insomnia segment is holding the largest market share as it has become one of the common disorders among the adults and geriatric populations. As per National Institutes of Health estimates, around 10% of the geriatric population complains of sleep disruption. In line with this, major market players are investing heavily in R&D for providing effective insomnia tablets. Recently, Dr. Reddy's Laboratories launched Ramelteon tablets for treating insomnia in the U.S. market.

A huge population is suffering from insomnia in India, China, and Japan and the number is expected to grow further at the fastest CAGR during the forecast period.  Strong government support, huge pharmaceutical industry, and favorable reimbursement policies are projected to add fuel to the overall market growth. Several governments in the region are organizing numerous campaigns to spread awareness among people about sleep disorders and their avaialbe treatment options. In March 2017, Philips Healthcare oragnized differernt awerness program on World Sleep Day 2017 and launch a Centre of Excellence for training doctors on diagnosing sleep disorders in major Indian cities.

The Middle East and Africa are investing heavily in their healthcare sector to improve overall healthcare infrastructure. For instance, around 5.94% of GDP invested in research & development, World Bank. Furthermore, high prevalence of anxiety, depression and mental issue in Africa is positively influencing the market growth. According to the South African Depression and Anxiety Group (SADAG),  1 in 6 South Africans suffered from anxiety and depression in 2018.