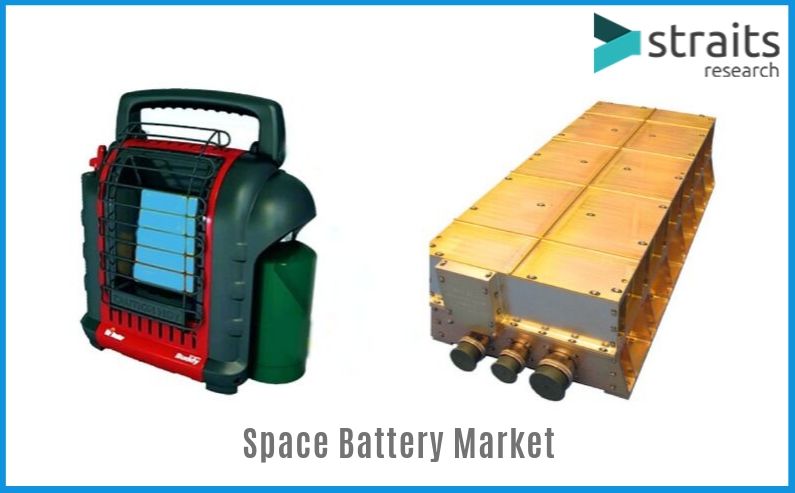 The quest for alternative habitable planets, need for geospatial studies to observe climate change, and an increasing number of military reconnaissance missions have spurred the need for space launches. Satellites hold the highest share in terms of space launch missions. As per the World Economic Forum (WEF), around 1,957 active satellites are orbiting the earth; which highlights the demand for space batteries to power the new and existing satellites. Furthermore, Private companies in the space sector are acting as a catalyst for the growth of the space battery market. Rapid technological advancement in space batteries is another factor that is boosting the demand for advanced batteries in the industry. Current market players are striving for innovative ways to decrease the disadvantages of the current batteries in existence and manufacture batteries with high efficiency, output, and minimum losses

In the last few years, the overall use of rechargeable batteries or lithium-ion batteries in space mission has significantly increased due to their lightweight and compact features. Presently, they are mainly used in electronic gadgets, telecommunication, and launch vehicles, among others. As per NASA, lithium-ion cell technology is one of the most promising electrochemical energy storage technologies because of its high energy density, high voltage, high storage capacity, and long-life cycle characteristics. The burgeoning research activities and emphasis on renewable energy storage system have dramatically fueled the demand for lithium batteries. In 2017, Saft equipped its 200th satellite with lithium-ion batteries to take flight on the second Iridium NEXT mission. In the same year, ISRO developed lithium-ion batteries for satellite and space launch. Besides, various associations are taking initiatives to develop and demonstrate new spacecraft technologies and capabilities for several missions in science, exploration, and space operation using lithium-ion batteries. On the other hand, lithium-ion batteries come with high thermal runaway effect, which may endanger the manned aerial vehicles and raise concerns pertaining to human safety. However, NASA has figured out a way to overcome the problem; unmanned aerial vehicles (UAVs) are popularly used for remote sensing applications, navigation systems, and others. Continuously emerging applications in the UAV market is expected to offer several opportunities for the satellite to be launched and boost the use of lithium-based batteries

The U.S. aerospace manufacturing sector, with sales exports of USD 151 billion in 2018, is among the most competitive industries in the world. Furthermore, the presence of NASA (National Aeronautics and Space Administration) in the U.S. propels the space battery market growth in the region. For instance, NASA’s budget, which is also the highest space budget in any country, was at around USD 22.6 billion for fiscal year (FY) 2020 which is an increase of over 5% over FY 2019 as stated in the Presidential Budget Request(PBR) released by The White House. NASA, in July 2019, announced to commercialize the International Space Station (ISS), a move which is likely to generate more revenue leading to substantial increase in the demand for space batteries. A great deal of investments by government and private firms, such as the Boeing Company, Lockheed Martin Corporation, and SpaceX in space missions is expected to accelerate the use of space batteries. For instance, from 2009 to 2018, space equity investment tallied around USD 18 billion, with approximately USD 3 billion invested in 2018. Exploration programs, commercialization of space ventures, and the increasing number of private players undertaking space endeavors are some of the factors encouraging the space battery market.