Understand the influence of COVID-19 on the Anti-Drowning System Market with our analysts monitoring the situation across the globe. 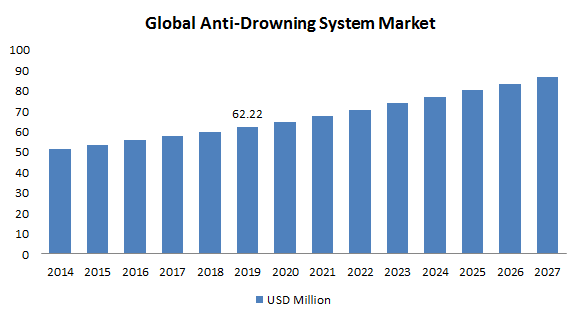 The increasing number of swimming pools, specifically in developing economies, drives the need for effective safety solutions and systems. The rising popularity of condominiums and large residential complexes that primarily comprise individual apartments with well-equipped large pools in the Southeast Asian countries is creating a lucrative opportunity for the growth of the anti-drowning system market. For instance, in Singapore, the number of condominiums surpassed a count of 340,000 in 2018.

Condominiums and swimming pools have become a standard for improving tenant lifestyle and attract expats. The increase in the growth rate of condominiums for the year 2018 for a few Southeast Asian countries is listed below.

The tourism sector also contributes to the growth of leisure infrastructures, such as pools and spas, creating a fertile base for the anti-drowning system market. Resorts and hotels attract numerous tourists, and the growing popularity of Southeast Asian countries as tourism destinations favorably influences the market. For instance, Indonesia welcomed 13.5 million tourists in 2016. Governments in these economies are encouraging expansion projects focusing on the development of hotels and pools. Bali had more than 2,500 hotels with pools in 2016. The scenario has brought to light the importance of effective safety systems, propelling the growth of the anti-drowning system market.

Based on type, the market is segmented into mounted and wearable systems, among which the wearable system segment accounted for around a 70–72% share in 2019 globally. The rising incidents of child and adult drowning have raised awareness about the importance of wearing life jackets, refraining from alcohol while operating watercraft, and enrolling in boating safety courses. Companies and government officials are taking extra precautions in the approval and deployment of designated guarding personnel and life-saving devices in and around swimming pools, spas, and public parks. Some of the widely used wearable devices are listed below.

A swimming bracelet consists of a sensor, warning device, timer, and radio communication device. Battery-powered waterproof swimming bands that inflate a balloon when pressed are widely gaining popularity in North America to detect drowning children. There is also a growing demand for swimming bracelets equipped with loudspeakers.

Technological developments are creating demand for wireless nodes that collect environmental and user data and transmit a warning message to the monitor terminal. Swimming environment and hand gestures allow lifeguards to identify a drowning person and initiate rescue options. Modern swimming bracelets can collect real-time data in an interval of one second and continuously refresh underwater conditions calculated by current hydraulic gage, heart rate, and signal intensity. The alert program is started immediately if underwater penetration exceeds the reservation threshold of 1 meter for more than 30 seconds.

Goggles have long been used by swimmers and sport practitioners for the protection of eyes against chlorinated freshwater. Technology equipped swimming goggles are now helping in the detection and analysis of various readings exhibited by the victim during drowning distress, which includes monitoring of the wave pattern due to panic and irregular pressure variations generated by the gadget.

Swimming goggles are incorporated with two drowning detection sensors on each side. A resistive based circuit attached to the microcontroller detects if both sides of the nose and mouth are closed, and the drowning detection unit generates an alarm. The signal is transmitted using underwater communication technology such as acoustic waves and infrared waves to inform lifeguards and concerned authorities.

The commercial segment by application accounted for the largest share of around 75–77% in 2019. The increasing number of public parks and pools, spas and resorts, schools, the popularity of water sports, adventure activities, and swimming clubs, and growth of shipping and ferry operations, coupled with the adoption of safety measures by authorities, life-saving organizations, and community members for the prevention of life-threatening accidents in water, drive the segment’s growth.

Singapore has announced plans to install infrared drowning detection systems at 11 of its 26 public swimming pools listed on the ActiveSG website by 2020. The country also plans to deploy surveillance cameras in all of its ActiveSG water facilities in the upcoming years. The Australian government has started an initiative to create safe play areas to reduce drowning cases in the region’s farm dams. Open water bodies are fenced or covered with monitoring systems.

Recent years have witnessed the highest number of drowning incidents at home, which is accelerating the need for anti-drowning systems. Rising concerns among parents and government measures are leading to the plotting of unsafe pool drains, gates, and water conditions. On the World Health Organization’s recommendations, the U.S. government is developing its own comprehensive drowning prevention plan. The adoption of wearable and mounted anti-drowning systems, as part of the scheme, is anticipated to gain remarkable momentum, owing to improved purchasing power.

More than 14 million North American private pools and spas, including those in the U.S., Canada, and Mexico, are regulated by state or local governments. States and municipalities look after the installations of fencing, signage, or alarms in residential pools. Therefore, some regions offer enhanced protections from water dangers in some areas than others.

South America to Emerge as the Fastest Growing Market with a 4.7% CAGR

The WHO mortality data reveals drowning as one of the top five causes of death for children aged 1–14 on the continent. This can be mainly attributed to the lack of physical barriers between people and water, inadequate supervision and monitoring tools, uncovered water supplies, and poorly maintained vessels. The least-educated regions of South America have suffered the worst effects of drownings due to the unavailability of safety resources in recent years.

The rising popularity of water sports, beach parties, holidays, and cultural events, such as concerts and dances, has increased the number of pools in clubs, dwellings, and homes in Brazil. There are an estimated 10 million practitioners of water sports, as per the WHO, which has further increased the number of drownings possibilities in the region.

Some of the key companies operating in the market are Variopool, Swim Eye, Poolview Limited, Coral Detection System, Sentag, SEAL SwimSafe, Poseidon Technologies, and AngelEye. Among these, Poseidon Technologies dominates the global market. Key players focus on improving their anti-drowning systems with an emphasis on technological advancements. They are also pursuing expansion through strategic acquisitions and mergers. For instance, Maytronics Ltd has embarked on various acquisitions/mergers for widening its presence and enhancing its revenue.

What is the key factor driving Anti-Drowning System Market?

the rising popularity of condominiums and large residential complexes are the key factors expected to drive Anti-Drowning System Market during the forecast period.

What was the value of Global Anti-Drowning System Market in 2019?

In 2019 Global Anti-Drowning System Market was valued at USD 62.22 Million.

Who are the active players in Anti-Drowning System Market?

Which region is expected to hold the highest market share in the Anti-Drowning System Market?

Which is the leading segment in the Anti-Drowning System Market?

Wearable Type Segment is expected to be the leading segment in Anti-Drowning System Market during the forecast period.

How much is the Anti-Drowning System Market worth in the future?