B cell lymphocytes are responsible for humoral immunity or antibody-mediated immune systems. However, their function is severely affected in the case of B cell lymphoma, which makes the patients susceptible to various chronic infections. Enlargement of lymph nodes at various body parts such as the neck, groin, and abdomen are the most common symptoms of B cell lymphomas. In addition, victims are also likely to suffer from night sweating, severe weight loss, fatigue, and shortness of breath. 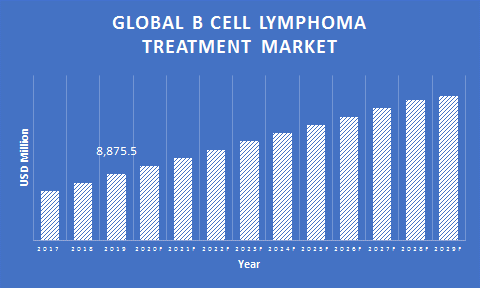 Rising Prevalence of B Cell Lymphoma

About 93% of patients with Hodgkin’s lymphoma are aged below 45 years and undergoing diagnosis. Lymphoma, Leukemia, and multiple myeloma are the three most common forms of blood cancer. More than 300,000 people are diagnosed with leukemia and 400,000 people are diagnosed with lymphoma each year across the globe. In 2018, about 510,000 new cases of Non-Hodgkin’s lymphoma (NHL) were diagnosed in the world, World Cancer Research Funds International. Leukemia & Lymphoma Society has estimated that over 8,110 and 74,200 people are expected to be diagnosed with Hodgkin lymphoma and Non-Hodgkin Lymphoma (NHL) by the end of 2020 in the U.S., respectively. However, with the novel and effective treatment options, the survival rate of the patient suffering from this cancer has doubled in the last five years. 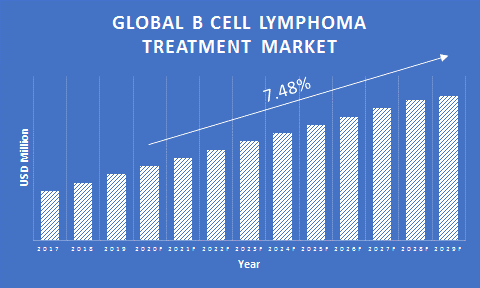 Launch of Several Novel Therapies for Treating B Cell Lymphoma

Currently, numerous research institutes and biopharmaceutical companies across the globe are working to develop new therapies and drugs to treat B cell lymphoma. For instance, Forty Seven Inc. and Acerta pharma, an  AstraZeneca’s hematology research center, have been developing innovative therapies to treat B cell lymphoma  that involve macrophage mediated phagocytosis of malignant B lymphocytes. As of now, the USFDA has approved a range of novel therapies, including chimeric antigen receptor (CAR) therapy, engineered toxin antibody, macrophage-mediated phagocytosis, antibody-based therapies, and small molecule inhibitors (like BTK inhibitor, PI3K inhibitor, BET inhibitor) for the treatment of B cell Lymphoma. These novel therapies are somewhat successful in improving the survival rate in many B cell lymphoma cases. On the other hand, biosimilars are expected to compete with all these novel therapies, owing to their improved efficacy, safety, and affordability. Recently USFDA has approved a biosimilar drug product called ‘Truxima’ for the treatment of non-Hodgkin’s lymphoma in adult patients. On account of the growing prevalence of cancer, several players are already engaged in developing effective treatment option and a range of products are already in the therapeutic pipeline and waiting for FDA approval and commercialization. For instance, emerging therapies like Lisocabtagene maraleucel launched by Bristol-Myers Squibb, KTE-X19 by Gilead Sciences, Tazemetostat by Epizyme, Abexinostat by Xynomic Pharmaceuticals, and Umbralisib by TG Therapeutics.

Increasing awareness among health care providers and patients about the possibility of curing B cell lymphoma along with increased government research funding is expected to drive market growth during the forecast period. This can be attributed to several government initiatives such as “Be Clear on Cancer campaign” by Public Health England, a government agency of the Department of Health of the U.K, which is aimed at improving early diagnosis of lymphomas by organizing public awareness campaign. On the other hand, the National Cancer Institute (NCI) obtains funding from the U.S. government to support research activities in B cell lymphoma. In April 2016, the U.S. government approved about USD 5.2 billion for the NCI. Currently, NCI is engaged in conducting clinical trials on B cell lymphoma patients who require repetitive diagnosis and prognosis.

Apart from government-funded organizations, several private players are also engaged in developing innovative drugs. For instance, Novartis invests about 40% of its total revenue in the development of new medicines for cancer treatments. It has invested about USD 14,000 million in its special oncology research division responsible for the development of newer cancer drugs. In March 2019, the USFDA approved “KYMRIAH,” a genetically modified immunotherapy developed for the treatment of late-stage B cell lymphoma.  Similarly, F. Hoffmann-La Roche Ltd. has spent 50% of its total R and D revenue on cancer research, and in June 2019,  it received the USFDA approval for new targeted medicine Polivy™ in combination with Rituxan® for the treatment of adults suffering from B-cell lymphoma. Another player BeiGene invested about USD 1.25 billion in global cancer research in 2018 and in November 2019, the USFDA grant approval for commercializing an innovative molecularly-targeted immuno-oncology drug BRUKINSA™ (zanubrutinib) for the treatment of B cell lymphoma in adult patients.

The increasing prevalence of B cell lymphomas has increased the demand for effective therapies across the globe. Chemotherapy, immunotherapy, and radiation therapy are the most used cancer treatments. Currently, chemotherapy is dominating the global B cell lymphoma market due to widely prescribed chemotherapy drugs such as cyclophosphamide, doxorubicin, vincristine, and prednisone along with rituximab. In addition to this, several combination therapies for the treatment of lymphomas include various chemotherapeutic agents because of their therapeutic benefits and easy administration through oral and intravenous routes. However, severe cytotoxicity associated with chemotherapy is likely to hamper its growth to some extent.

On the other hand, immunotherapy is projected to witness the fastest growth over the forecast period on account of higher effectiveness of treatment over other therapies, less adverse effects, and the presence of premium brands such as Rituxan, Revlimid, Mabthera, Gazyva, and Arzerra.

Immune check point inhibitor drugs will experience high growth in market primarily due to their high target affinity and specificity towards malignant B lymphocytes. Currently, the  USFDA has approved various immune check point inhibitors, including Keytruda,Opdivo,Imfinzi and Tecentriq. Keytruda and Opdivo. These novel immunotherapies present in market expected to experience fastest growth over the forecast period.

Targeted therapies such as gene therapy, antibody-drug conjugates, BTK (tyrosine kinase) inhibitor, PI3K (phosphoinositide 3-kinase) inhibitor, and others are increasingly adopted for the treatment of B cell lymphoma as a result of high precision, minimum side effects, and growth in personalized medications.

Stem cell therapy is one of the prominent treatment options for B cell lymphoma and it has gained significant attention from the healthcare professionals. This can be attributed to the improved survival rate of patients, rising public and private investments in stem cell research, growing public recognition, and favorable regulatory framework for stem cell therapeutics. For instance, the Government of Canada has initiated a Strategic Innovation Fund Program, which invests in stem cell therapy research for developing treatments for various blood cancers. Stem cells are considered as an effective therapy for lymphoma due to their high proliferative capacity, low immunogenic reactivity, and differentiating capabilities. Stem cell therapy is raising hopes for the cure of lymphomas which was once considered incurable. Scientists have used various strategies to make the use of stem cells to treat B cell lymphomas. For example, stem cells have been modified to suppress proliferative proteins in malignant B cells and stem cell-mediated suicide gene therapy to achieve death of malignant B cells.

In 2019, North America dominated the global B cell lymphoma treatment market and is expected to continue the same during forecast period due to higher prevalence of B cell lymphoma in the region, high adoption rate of novel therapies, presence of key players, high R&D investments, and well established healthcare infrastructure. According to the American Cancer Society, non-Hodgkin lymphoma accounts for about 4% of all cancer cases in the U.S. and about 10,000 new cases of non-hodgkins lymphoma are diagnosed each year in the country. The U.S. government is also actively supporting and funding lymphoma treatment. For instance, in 2017, the US National Cancer Institute (NCI) spent around USD 135 million on lymphoma research. Government has also established Lymphoma Research Foundation (LRF) to develop treatment for lymphoma, which also supports financial needs of patients suffering from lymphomas.  Furthermore, market players such as F. Hoffmann-La Roche, Bristol Myers Squibb, and Celgene Corporations are projected to launch new products in the market to expand their product portfolio. Powerful product pipeline of key players is expected to retain the dominating nature of North America region. 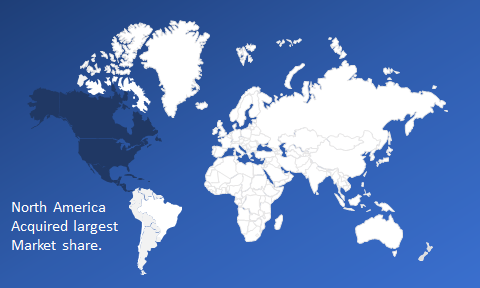 The European market for B cell lymphoma treatment is also expected to grow at a significant rate due to an increase in the prevalence of lymphomas, favorable government initiatives, and an increasing number of research activities for developing drugs for treating B cell lymphoma. As per the European Cancer Information System, lymphoma cases in Europe increased to 134,311 in 2018, out of which 19,193 were reported for Hodgkin’s lymphoma and 115,000 for other B cell lymphomas. Increased awareness, technological advancement, high adoption rate for newer therapeutics, and rising skilled and specialist medical professionals are projected to regional market growth.

South America B cell lymphoma market is offering several growth opportunities as the region has a higher prevalence of cancer and a lack of healthcare facilities or poor healthcare infrastructure. Moreover, the region witnesses over 44% mortality rate of non-Hodgkin’s lymphoma, where B-cell lymphomas, diffuse large B-cell lymphoma, and other lymphomas are the most common. Uruguay, Ecuador, Peru, and Colombia have the highest incidence rates of B cell lymphomas. To address these dire issues and reduce the economic burden, South American countries have taken various measures to improve healthcare coverage in the last few years. Countries like Brazil, Argentina, and Columbia have successfully implemented cancer-related awareness programs and improved access to healthcare facilities and increased healthcare spending.

The Middle East & Africa are expected to offer expansion opportunities to the B cell lymphoma market in the near future due to increased government support for cancer research and rapidly developing the health care industry in the regions. Low spending power, poor healthcare infrastructure, especially in Africa, limited availability of funds are likely to hamper the market growth to some extent in the years to come.

What is the key factor driving B Cell Lymphoma Treatment Market?

Rising investment in research, increasing awareness among health care providers and patients are the key factors expected to drive B Cell Lymphoma Treatment Market during the forecast period.

Which is the leading segment in the B Cell Lymphoma Treatment Market?

Monoclonal Antibody Segment is expected to be the leading segment in B Cell Lymphoma Treatment Market during the forecast period.

Which region is expected to hold the highest market share in the B Cell Lymphoma Treatment Market?

North America is expected to hold the highest market share in B Cell Lymphoma Treatment Market.

Who are the active players in B Cell Lymphoma Treatment Market?