Biofuels, commonly referred to as liquid transportation fuels, are derived from plant materials such as forest and mill residues, wood and wood residues, agricultural crops and residues, aquatic plants, animal wastes, livestock residues, and other organic portion of urban waste.

The rising global concern regarding the fossil fuel prices and availability has drawn the attention to biofuels as a substitute for petroleum-derived fuel. In addition, these biofuels can also help in addressing global issues such as energy cost, energy security, and concerns related to global warming. Furthermore, as the feedstock of these biofuels can be found in abundance across all regions of the world. And can be efficiently utilized in the combustion engines. This provides them with an immense potential to change the existing fuel distribution infrastructure and create a new end market for agriculture commodities.

The umpteen advantages of these biofuels have compelled the government organizations across the world to establish national and regional innovation systems that encourage the research and development of these fuels. In 2018, Archer Daniels Midland Company signed an agreement with DuPont de Nemours, Inc. in order to develop, produce, and market cellulase enzymes to encourage producers to use technologies and utilize grain-based ethanol plants and other waste products for the production of biofuels. 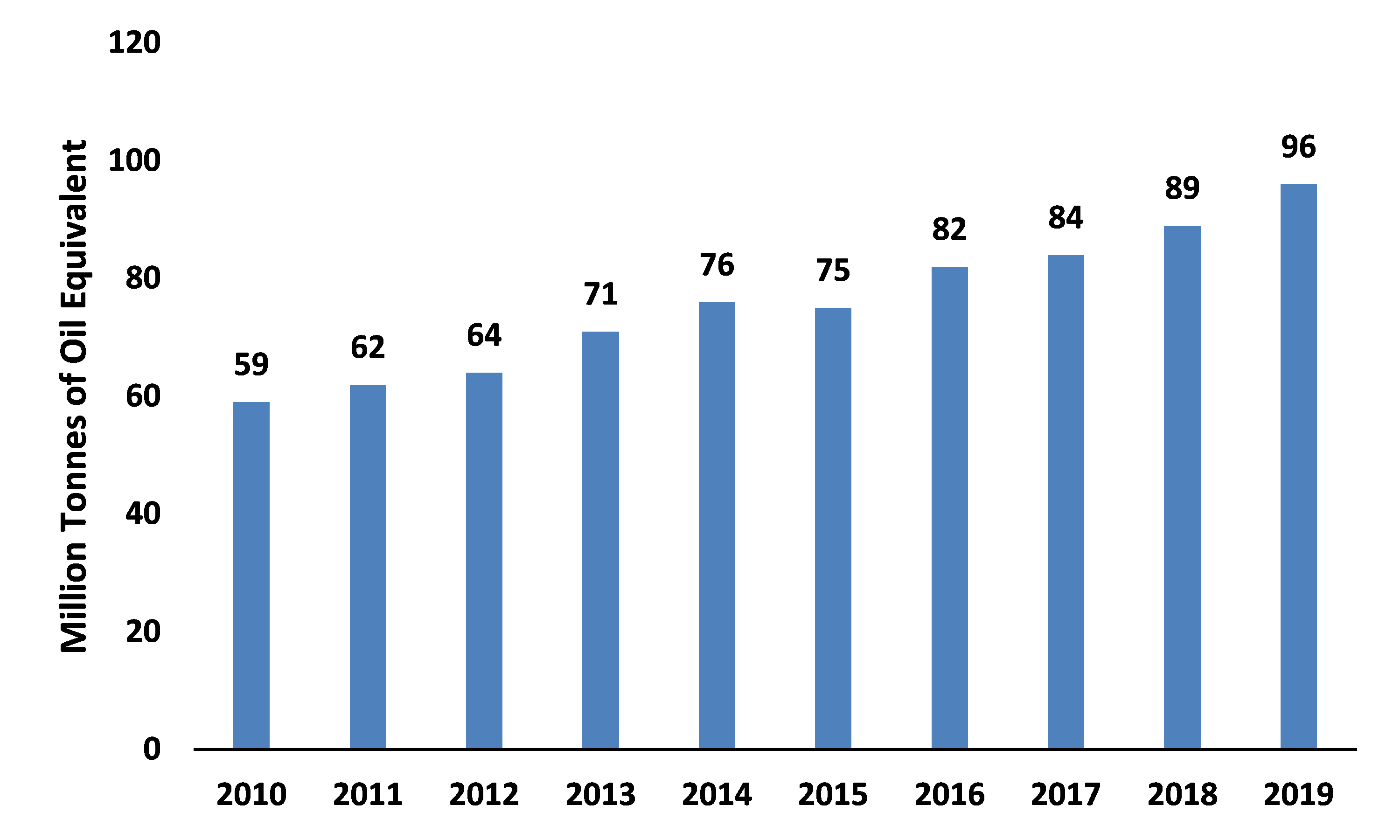 The first generation biofuels can be further segmented into three primary categories based on the feedstock used for their production. The first type relates to petroleum-gasoline substitutes that are produced from the fermentation of starch and sugar-rich crops, the second type corresponds to petroleum-diesel alternatives derived from vegetable oil and biodiesel, and the third compares to natural gas substitutes produced from biogases.

Although easy availability of the feedstock, simple processing, and minimum greenhouse gas emissions are some of the advantages of the first-generation biofuels, the biofuel production processes from the first-generation depend on the edible crops as feedstock and have low efficiency in terms of both energy and land usage, engendering risks related to food security and affordability.

Second-generation biofuels, also known as advanced biofuels, are made from sustainable feedstocks such as wheat straw, maize stover, rice straw, dead wood, waste fabrics, and bagasse. The greater environmental benefits, a much larger array of feedstock options, and less competition on land use are likely to be the primary factor driving the growth of the segment during the forecast period.

As the second-generation biofuels have good potential for cost reductions and better production efficiency levels, efforts are being undertaken by the economies across the world to improve their technologies and bring down the generation cost of these biofuels further. Additionally, various countries worldwide are also striving to form regional and international cooperation, intending to scale up the potential of the biofuel market, by promoting technology transfer and sharing of R&D costs. As the development in the field proceeds, the segment will witness a healthy growth in the forthcoming years.

Ethanol is one of the most common additives in fuels. The higher octane number and the ability to burn cleaner than most hydrocarbon fuels are the key factors that are driving the growth of the segment. In addition, creating ethanol from biomass can further lead to little or no contamination during combustion. Thus, resulting in no smog and smooth working of vehicle parts. These additional advantages of ethanol production from biomass are further likely to add to the market growth in the upcoming years.

The average ethanol content in petrol is around 5.4%; however, some countries use 25% or even 100% ethanol as fuel in vehicles. The U.S. and Brazil are the world's largest producers of ethanol. In the U.S., petrol contains an average of 10% ethanol. Whereas, in Brazil, petrol has a minimum of 25% ethanol. However, ethanol is corrosive to rubber and is required in the large quantity to produce the same energy. For instance, it takes about 1.5 times more ethanol than gasoline to get the same energy. These drawbacks of ethanol are anticipated to hinder the growth of the segment during the forecast period.

Biofuels are used in all three types of the transportation sector – land, aviation, and marine as the transportation sector is one of the largest emitter of greenhouse gases worldwide, and these emissions have foreseeable consequences on the climate change. The countries across the globe are continuously focusing on the development of sustainable fuels to reduce the emission levels from the sector. Therefore, the advent of biofuels has brought forth lucrative growth opportunities for players in the industry to address the emission issue through the use of biofuels in the upcoming years. 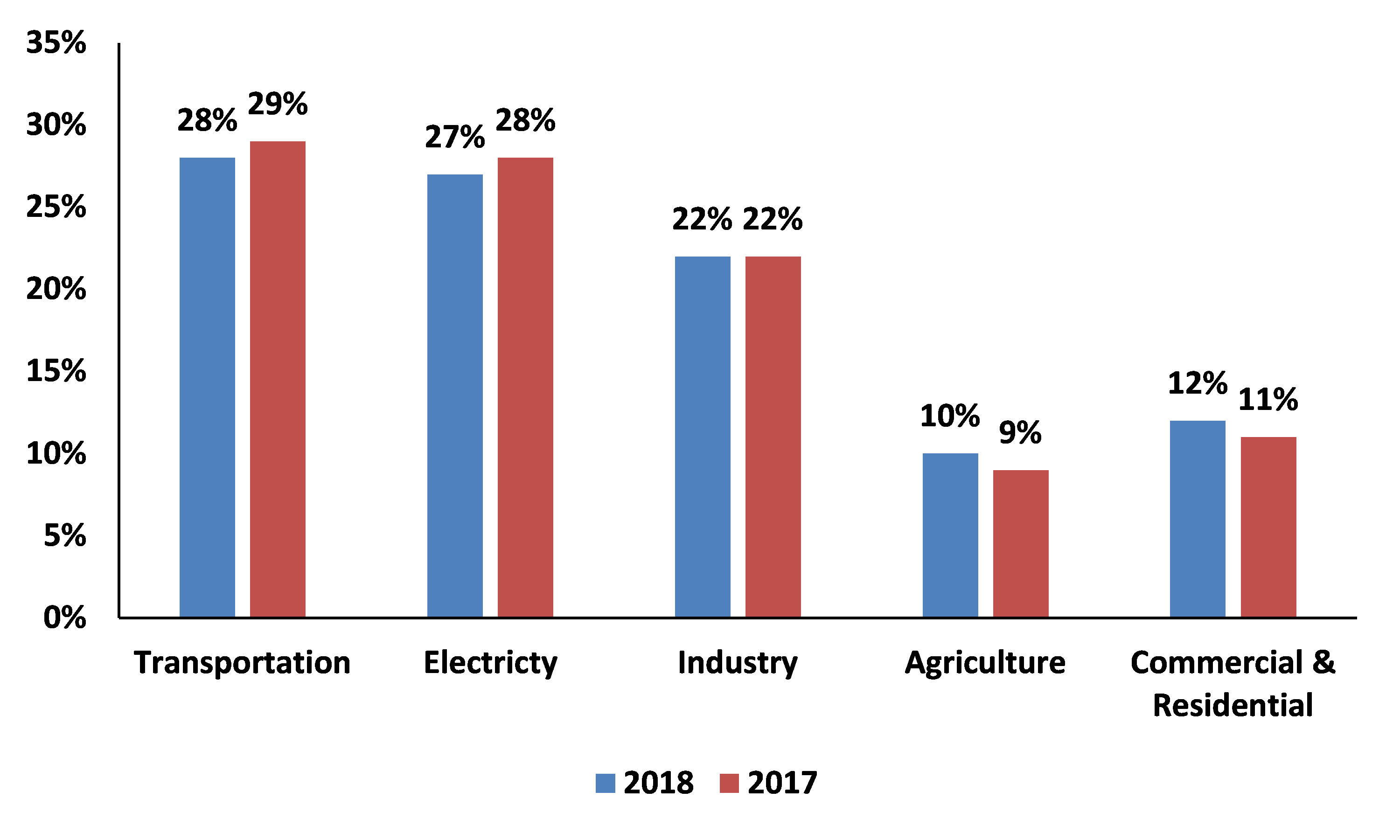 In the past few years, the prices of fossil fuels are soaring, and people have become more aware of the negative environmental impacts of fossil fuels. They are shifting toward alternative resources for energy production. Also, as the population is rising, the number of vehicles on the road are also rising. This increase in the number of vehicles and decreasing dependency of individuals on fossil fuels is further anticipated to fuel the growth of the biofuel market in the years to come in. According to The International Energy Agency (IEA), biofuel production in the transport sector witnessed a 6% year-on-year growth in 2019 and is projected to register a 3% annual production growth in the next five years. 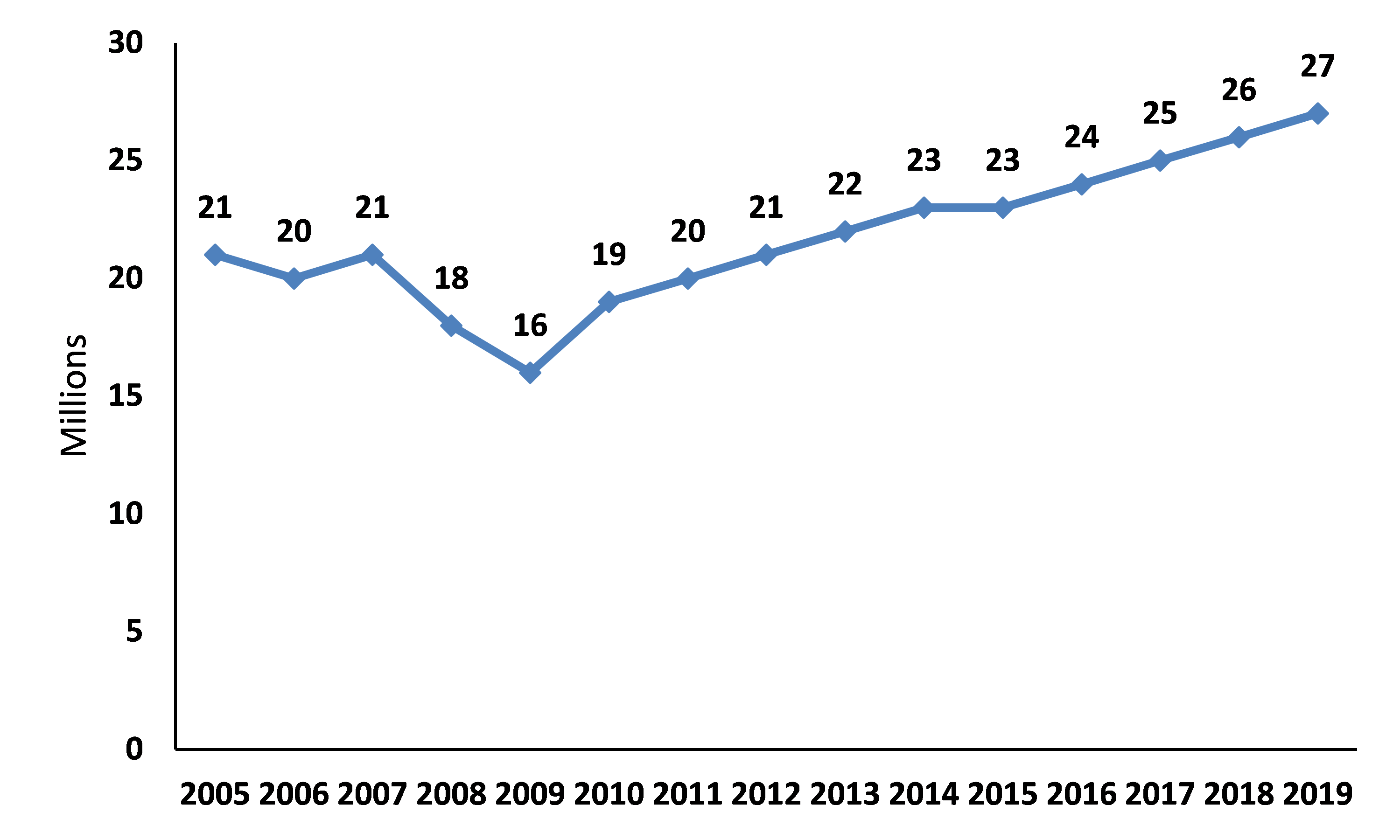 The U.S. — The Largest Consumer of Biofuels

North Americ dominated the global biofuel market in 2019 and is likely to spearhead the market during the forecast period. The increasing concerns regarding the rising temperature and changing climate conditions are significantly driving the demand for energy generation from renewable resources to maintain energy security and sustainability. 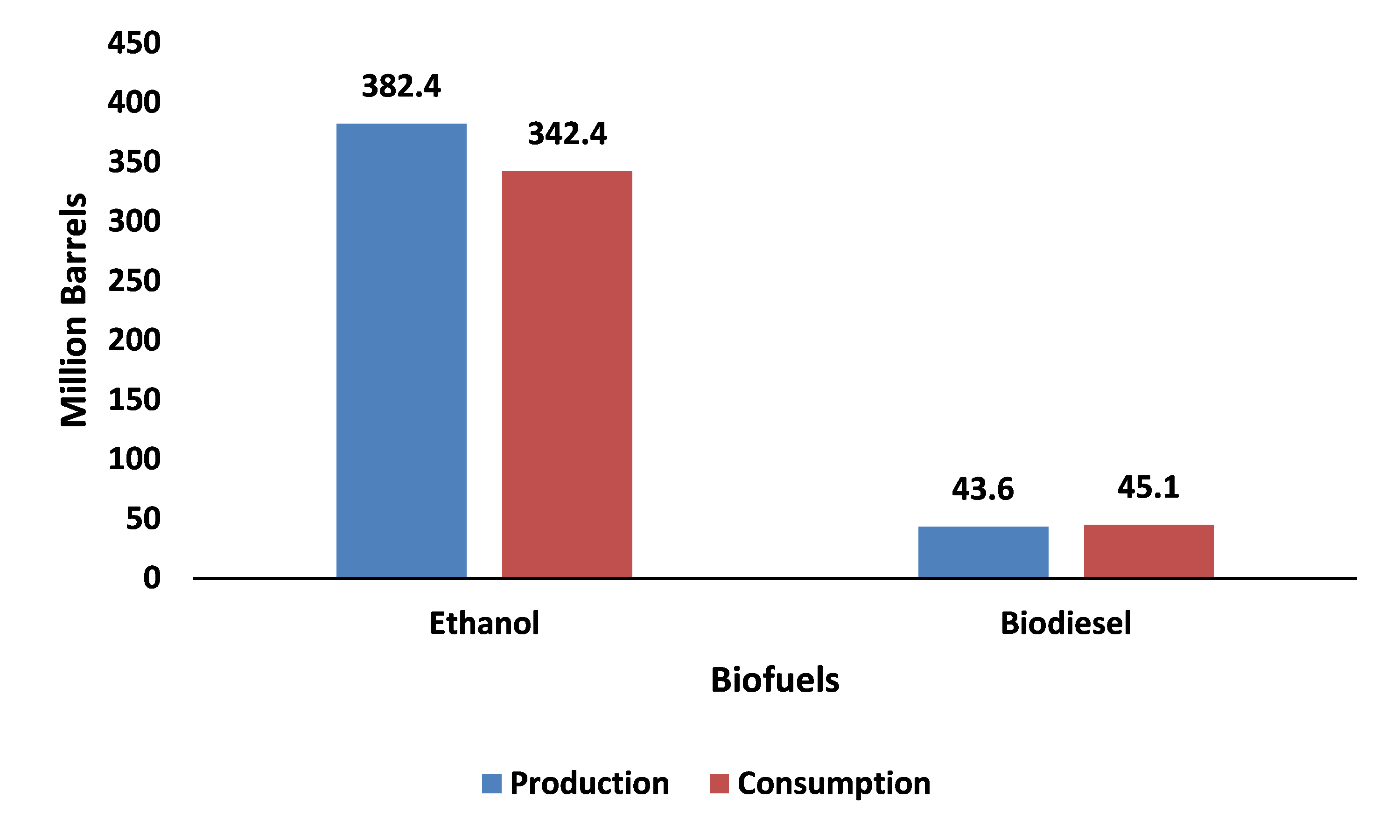 Country-wise, the U.S. dominates the North America biofuel market. In the U.S., almost 90% of bioethanol is produced from maize, and maize also plays a vital role in the production of biodiesel. Biofuels have witnessed significant growth in the past few years, which is majorly due to the need to reduce air pollutants in the big cities and their compliance with the U.S. Clean Air Act.

Additionally, global warming has become a critical concern; governments in the region are taking various initiatives to bring down the pollution rate and GHG emissions by setting regulations that mandate the consumption of biofuels along with fossil fuel.  Some of the key legislation and regulations set in the U.S. are the Farm Security and Rural Investment Act, Energy Policy Act, Renewable Fuel Standards and Related Legislation, and Ethanol Blending Act.

What is the key factor driving Biofuels Market?

Rising global concern regarding the fossil fuel prices, increasing concerns regarding the rising temperature, and changing climate conditions are the key factors expected to drive Biofuels Market during the forecast period.

Which is the leading segment in the Biofuels Market?

Ethanol Fuel Type Segment is expected to be the leading segment in Biofuels Market during the forecast period.

Which region is expected to hold the highest market share in the Biofuels Market?

North America is expected to hold the highest market share in Biofuels Market.

Who are the active players in Biofuels Market?