Chlorine is one of the essential elements consumed during everyday life. It is used in a gamut of chemical processes to produce thousands of crucial products. From medicines to tables and chairs and from cell phones to solar panels and cars, chorine is utilized during the manufacturing process. Chlorine is made from common salt and sodium chloride, mainly using the Chlor-alkali method. PVC is the primary application area of chlorine across the globe.

Construction and Infrastructure Development Accelerating the Demand for Polyvinyl Chloride

Polyvinyl chloride is the most commonly used plastic in the world and is made up of approximately 57% chlorine. Over the course of time, plastic materials have made their way from toys and kitchenware to critical industrial and aerospace applications. The construction sector is the largest consumer of PVC in the world, and the burgeoning construction activities across the globe are slated to boost the demand for PVC. Growing infrastructure development, especially in emerging economies such as India, China, and Brazil, along with the rapid pace of urbanization, is expected to boost the demand for polyvinyl chloride. Besides its extensive application in the construction sector, polyvinyl chloride has been the preferred material choice for several end-use industries such as electrical and electronics, packaging, automotive, and aerospace.

The increasing adoption of polyvinyl chloride in the automotive and aerospace industry is anticipated to provide an impetus to the chlorine market growth. Additionally, automotive manufacturers are seeking ways to reduce the weight of vehicles to enhance performance and facilitate efficiency without compromising safety by using plastic components instead of metal. The American Society of Mechanical Engineers has estimated that companies can boost cost saving by 25–50% by adopting plastic parts.

The chemical industry, today, plays a vital role in the growth of a nation’s economy and contributes significantly to the GDP. This is accredited to the contribution of the chemical industry to manufacture a range of essential products — from life-saving medical care to packaging and from construction to food and beverages. The chemical industry is one of the prominent consumers of chlorine and is used in the manufacturing of various organic and inorganic chemicals, notably hydrochloric acid and titanium dioxide. Emerging economies, including China, India, Brazil, Indonesia, Thailand, among others, are foreseen to witness a good deal of growth opportunities during the forecast period, eventually aiding the growth of the chlorine market.

China and Southeast Asian countries have a competitive advantage in chemical manufacturing compared to global markets, owing to the abundant and affordable supplies of feedstock and energy. China’s chemical industry solely generated revenue to the tune of USD 1315.40 billion in 2018, while global revenue was USD 3675.1 million in the same year. A rising number of SMEs in the material manufacturing sector across China, India, and Southeast Asia are likely to fuel the growth of the chlorine market. 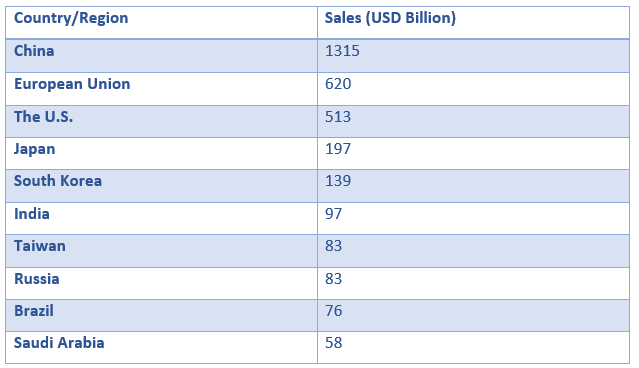 COVID-19 Impact on the Chlorine Market

Chlorine is widely used by several end-user industries, including chemical, plastics, pharmaceuticals, and paper and pulp, among others. These industries are adversely affected by COVID-19 outbreak across China, Europe, and the U.S. China, the U.S., Italy, and Germany are among the largest consumers of chlorine. Also, the U.S. and China are the largest producers of chlorine, and COVID-19 has impacted the production rate of chlorine. According to the RM Analysis, Chlor-alkali plant operating rates have declined by 50% to 75% across the globe. For instance, one of India’s largest chemical manufacturers, Tata Chemicals, has to shut down its manufacturing facility in Andhra Pradesh. Additionally, product and inventory transportation is restricted as the logistics services are constrained due to the COVID-19 outbreak.

Production of chlorine is likely to condense by around 30% to 37%. On the other hand, demand for chlorine-based disinfectants to treat water and to clean Personal Protective Equipment (PPE) kits is on the rise. The World Health Organization announced guidelines to clean the PPE kit with chlorinated water.

National chemical associations across the globe have urged the respective government to allow an exemption to chemicals that are essential to combat the COVID-19 outbreak, which includes chlorine.  For instance, the American Chemistry Council, along with its member companies, is working closely with government officials to ensure uninterrupted business operations

The EDC/PVC segment is the predominant consumer of chlorine in the global chlorine market during the forecast period, 2020–2029. Chlorine is used to manufacture several organic chemicals such as glycerine, ethylene dichloride, glycols, vinyl chloride monomer, chlorinated solvents, and chlorinated methanes, among others. Water sanitation is likely to hold a substantial share in terms of volume compared to revenue, owing to the price differences compared to the other end-use applications.

Chlorine is one of the vital elements used in producing pharmaceuticals; according to the Americal Chemistry Council, it is estimated that play a critical function in the manufacturing of at least 88% of prescripted pharmaceuticals sold in the U.S and Canada. The increasing prevalence of chronic diseases, non-communicable diseases, and a vast number of patients with infectious respiratory, sexually transmitted diseases, and gastrointestinal disorders are expected to fuel the demand for prescripted pharmaceuticals in the coming years. National health protection schemes such as Ayushman Bharat (India) and Jaminan Kesehatan Nasional (Indonesia) are further fueling the per capita healthcare expenditure. Apart from this, an increasing number of well-trained medical professionals across Southeast Asia, along with the availability of medical institutes, is anticipated to fuel the demand for healthcare products.

Production capacity expansion has been the predominant strategies adopted by the companies to gain a higher share in the global chlorine market. For instance, in October 2019, Ercros announced production capacity expansion of the chlorine and caustic soda as per its Act Plan. The capacity will be expanded by 26,000 tons annually. Furthermore, in July 2018, AkzoNobel Specialty Chemicals announced the investment to upgrade its second production line to produce chlorine and caustic soda in the Netherlands.

Which region is expected to hold the highest market share in the Chlorine Market?

North America is expected to hold the highest market share in Chlorine Market.

What is the key factor driving Chlorine Market?

the rapid pace of urbanization is expected to boost the demand for polyvinyl chloride, growing infrastructure development are the key factor expected to drive Chlorine Market during the forecast period.

Who are the active players in Chlorine Market?

Which is the leading segment in the Chlorine Market?

EDC/PVC Application Segment is expected to be the leading segment in Chlorine Market during the forecast period.