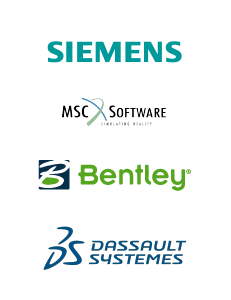 The use of sophisticated and interactive computer software to address engineering challenges is known as computer-aided engineering (CAE). CAE tools include computational fluid dynamics (CFD), finite element analysis (FEA), and multibody dynamics (MBD). Engineering activities are optimized with CAE software. These approaches are used to assess the overall performance and resilience of assemblies and components. CAE is utilized in a variety of industries, including aviation, space, automation, and shipbuilding.

The computer-aided engineering market is expected to grow at a CAGR of approximately XX% during the forecasted period 2020–2027.

CAE ensures higher site construction standards, inventive designs, and efficient building operations. Computational fluid dynamics has gained popularity in recent years. For example, the automobile industry has begun to use this technology in its air-conditioning systems.

Partnerships, mergers, and acquisitions between original CAE suppliers and resellers have risen recently. As a result, the value-added resellers (VARs) are increasing, which benefits the CAE industry. CAE software has several uses and helps with activities, such as analysis, validation, simulation, and engineering product manufacture.

Although CAE is utilized for analysis and troubleshooting, opponents believe those correct findings are obtained late in the design cycle, restricting the expansion of the CAE business. Furthermore, open-source solutions with licensed source code are widely accessible.

As a result, firms avoid investing money in commercial licensing for CAE solutions, stifling industrial growth. The growing consumption of computational fluid dynamics aids the cost reduction of electric vehicles and weather prediction, which is projected to benefit the CAE market during the forecast period. 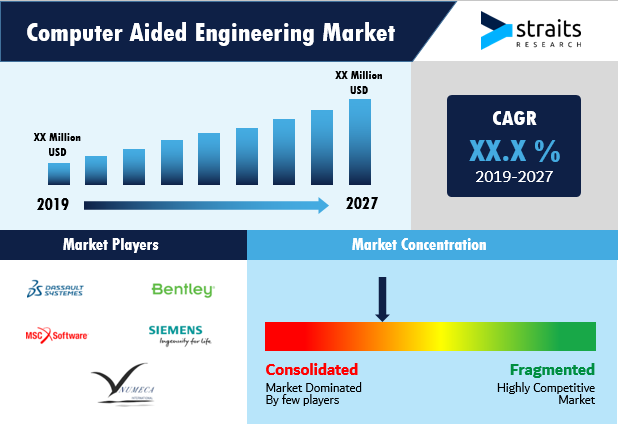 Increase in Adoption of IoT and 3D Printing

The CAE industry is predicted to grow as the Internet of Things (IoT), tablets, and smartphones become more popular. Wearable gadgets used in medical, fitness, transportation, education, entertainment, and gaming become widespread as the Internet of Things (IoT) expand, opening a path for the CAE industry to thrive. The decrease in electrical components and sensors, and appealing connections at reduced costs, have permitted the development of wearable technological gadgets.

Emerging engineering techniques such as 3D printing, BIM, and concurrent engineering are expected to influence the CAE business. Consumers use 3D printing to create three-dimensional images. The technology aids the reduction of production costs and the development of new industrial processes. The factors such as ease of use and limitless customizations are expected to drive worldwide expansion.

According to recent aerospace forecasts, there will be 34,000 civil aircraft in the globe by 2036, a 60% increase over today's figure, with 40% of them serving as replacement aircraft. As the Asian wealth grows, so will the demand for air travel. CAE tools are also being used to build electric battery-powered (and hybrid) aircraft engines and low-emission planes with solar panels on their wings.

Additive manufacturing of specialty components has become widespread, particularly in military applications. Internal aircraft parts can be 3D printed, but vital and non-critical components will be additively made, particularly with eco-friendly materials.

CAE has meticulously constructed the world's most technologically advanced passenger aircraft and next-generation aircraft. These are less damaging to the environment. The structural deformity of A350's wings occurs during flight at high altitudes. Fuel is consumed based on the aircraft's weight when it adjusts the flaps to fine-tune its center of gravity.

Considering the enhanced fan performance in aircraft engines and efficiency obtained from CAE simulations, the A350-1000 will consume 25% less fuel than other commercial aircraft. It reduces carbon dioxide emissions and the total carbon footprint of passengers. Besides that, the engine's acoustics are 40% lower than comparable aircraft engines, reducing noise pollution.

The vehicle industry is undergoing enormous transformations due to tougher pollution limitations and autonomous mobility disruptions. In the European Union, new CO2 laws are in effect since 2020, with a target of 95g CO2/km for all new passenger car fleets, marking a drop of 27%. A fee of 95€ per g/km of excess emission per vehicle will be charged to manufacturers who fail to fulfill the emissions standard.

Denmark's government intends to phase out internal combustion engines entirely by 2030. Many cities, including London, have banned diesel-powered automobiles from city centers to minimize harmful particle pollution. Norway will phase out traditional automobiles by 2025, followed by France and the United Kingdom in 2040 and 2050, respectively. By 2030, no new gasoline or diesel automobiles will be permitted in India. (If cost-effective.)

Lightweight technologies are being used as a standard in the design of modern automobiles. Composites were originally seen in Formula One automobiles, but they are becoming ubiquitous in premium automobiles. CAE is expected to play a vital role in order to achieve these goals.

In 2020, the FEA segment contributed over 51% of the revenue. It is projected to continue throughout the projected period. FEA is a form of computer study that helps determine a product's load-carrying capability. FEA models real-world components to examine heat transmission, electromagnetic potential, structural analysis, and efficient transportation problems.

The goal of computational fluid dynamics is to predict the efficiency of flowing fluid, employing quantitative models and algorithms. Turbulence, flow, and pressure difference of liquids and gases, and their relationships with different coefficients, are studied using CFD.

The end-user automotive sector is predicted to grow at a CAGR of more than 7.3% between 2020–2027 (30.69%). Computer-aided engineering software is used in the vehicle industry to assess the viability of heat dissipation systems such as cooling, ventilation, and aerodynamics. Due to the increasing use of CAE software, the aerospace end-user market is predicted to increase significantly over the projected period.

The goal of the government is to focus on defense and aerospace industries by helping enterprises grow through updating anti-terrorism technology and closing security gaps. Concerns about public safety and monitoring are expected to impact the demand.

Backside illumination (BSI) for increased sensitivity, color noise reduction (CNR) for truer colors, and high dynamic range (HDR) for smooth and clear video, are predicted to improve the electronics industry. Due to its effectiveness in identifying significant medical problems, the medical imaging business is gaining economic traction. The rise in critical and chronic diseases such as cardiovascular disease and cancer, and growing awareness towards the need for early diagnosis, are driving the need for imaging.

COVID-19 has caused chaos in the world economy, humanitarian aid, and healthcare systems. The rapid spread of the virus has a substantial impact on the worldwide automobile industry, causing a drop in the demand for both new and used automobiles.

The pandemic has a tremendous impact on the electric vehicle industry as the vehicles are regarded as cutting-edge mobility and are prohibitively expensive to buy. Due to the vigorous spread of the virus worldwide, many commodities' demand and supply chains have come to a standstill due to the lack of transportation medium.

However, by the end of 2020, the COVID-19 situation had stabilized in several countries, leading to the end of demand-supply imbalance and a considerable increase in new automobile registrations. It was due to the necessity of avoiding public transportation for the commute.

Additionally, the transmission market has lost its market share due to low or near-zero automobile sales and new requirements. Although over 90% of autos in the United States have adopted automatic transmission, large-scale markets such as India have failed to adopt automatic gearbox.  Automatic transmissions have become increasingly popular among drivers worldwide, assisting the industry in dealing with the pandemic and delivering high statistics in the aftermath of COVID-19.

North America is expected to own the largest market share and dominate the CAE sector between 2020–2027. North America is an important hub for technological inventions and uptake. In North America, the growing usage of cloud-based CAM systems to enhance production processes and automate production has increased computerized manufacturing.

The presence of important firms in the region raises the need for CAM, CAD, and CAE technologies. The process sector extensively relies on IT and supporting technologies for data gathering, real-time inspection, and management of production processes. North America expands with a proclivity for automated manufacturing due to an established production technology ecosystem. In addition, heavy investment in R&D by corporations to innovate the production process propels the expansion.

Due to large governmental investments in the industrial sector and capacity expansion, the North American region is expected to grow exponentially during the projected period. Demand from the sector will probably grow as industrial equipment become more automated. As labor costs surged, manufacturers in sophisticated countries such as the United States, the United Kingdom, and Germany pressed to automated equipment.

What is the key factor driving Computer-Aided Engineering Market?

The increase in adoption of IoT and 3D printing, growing usage of cloud-based CAM systems to enhance production processes are the key factors expected to drive Computer-Aided Engineering Market during the forecast period.

Which region is expected to hold the highest market share in the Computer-Aided Engineering Market?

Which is the leading segment in the Computer-Aided Engineering Market?

Automotive End User Segment is expected to be leading segment in Computer-Aided Engineering Market during the forecast period.

Who are the active players in Computer-Aided Engineering Market?