Diabetic Ketoacidosis (DKA) is characterized by excessive ketone acid accumulation in the bloodstream due to the insulin shortage in the body. A Severe hyperglycemic emergency in diabetic patients leads to a substantial increase in blood sugar level that disturbs the balance between insulin level and blood glucose level. Diabetic Ketoacidosis (DKA) tends to occur due to poor pancreas production in type 1 diabetes mellitus. Although patients suffering from type 2 diabetes are also at risk. 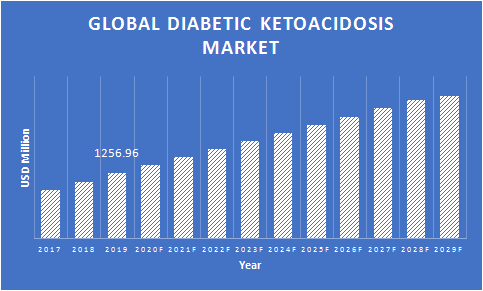 The primary treatment for DKA includes prompt administration of insulin and resuscitation of intravenous fluid upon admission to hospitals. According to InsuLenz, Inc., the average cost of USD 17,000 spent on every hospitalization of DKA patients highlights the need for better treatment options than those that are available now. Therefore, many research laboratories and market players are focusing primarily on the development of effective long-acting insulin. For instance, research scientists from the University of California, San Francisco, have developed insulin-producing cells using stem cells. They are planning to transplant these cells in islet cells of pancreas as it can help people with type 1 diabetes to achieve insulin independence for several years and prevent hyperglycemic conditions like DKA. Various nonprofit organizations are providing funding to increase overall research activities focused on DKA treatment, For instance, JDRF, an organization engaged in funding research on type 1 diabetes, is supporting new therapeutic developments to treat the Diabetic Ketoacidosis. Recently, Eli Lilly and Sigilon Therapeutics have partnered to develop encapsulated cell therapies using Sigilon Afibromer materials. This technology was launched with JDRF funding.

Furthermore, US FDA has approved three follow-on insulin biologic products such as ‘Basaglar’, Insuline lispro ‘Admelog’ developed by Sanofi Aventis, and Lusduna Insulin glargine developed by Merck, since 2015 these fast-acting insulin products are available in the market. Moreover, increasing research work on a dedicated Diabetic Ketoacidosis Treatment drug is expected to fuel competition in the market for Diabetic Ketoacidosis Treatment.

According to the American diabetic association, DKA often affects patients with type 1 diabetes and is the most serious hyperglycemic emergency in the diabetic population. In the United States alone, an estimated 135,000 cases were identified per year, and this complication accounts for almost half of the deaths of Diabetics younger than 24 years old. According to the center for disease control and prevention (CDC), in U.S., 168,000 cases were reported for diabetic Ketoacidosis in 2014. As per the epidemiologic study published by science direct, the incidence rate of DKA is about 80:10,000 patients with diabetes and the estimated mortality rate of DKA is more than 10%. The incidences of DKA are increasing by 20% annually in the world, which urges patients and physicians’ awareness essential for reducing such high incidences. DKA is preventable and often results from delayed care due to the lack of awareness about diabetic symptoms. Hence, creating awareness at the early stages of diabetes development is an important aspect of managing diabetic ketoacidosis morbidity.

Many organizations are offering better healthcare facilities to treat diabetes and related complications. For instance, the World Diabetes Foundation has conducted 555 projects in 116 countries. Through these projects, it has trained around 412,000 healthcare providers, opened over 13,800 clinics, and distributed around USD 147 million for diabetes management till now. Such high incidences and awareness regarding diabetes are expected to drive the market for diabetic Ketoacidosis during the forecast period.

Fluid administration by oral route or intravenous administration substantially decreases blood glucose levels. Not only does the fluid help to rehydrate the body, but it also controls the excess sugar. Electrolytes are essential for proper tissue function. During diabetic ketoacidosis, the absence of insulin might lower the blood level of several electrolytes. Before starting insulin therapy, fluids and potassium replacement are recommended as hypokalemia is also the most common symptom associated with DKA as insulin administration may further drop potassium levels. 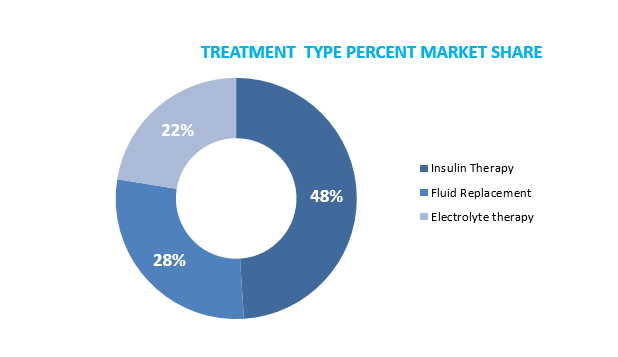 The Insulin therapy segment held the largest market share, owing to its higher adoption rate among physicians and patients suffering from DKA. Excessive ketones into the blood can be nullified by external insulin administration along with maintaining fluid and electrolyte balance; hence, it is first-line therapy for the treatment of DKA. Insulin therapies are widely available in the market in various delivery systems such as disposable insulin pumps, Insulin pens, Insulin jet syringes, and others.

The hospital segment is expected to dominate the market as DKA is severe hyperglycemic condition and hospitalization is mandatory for the treatment and monitoring of patients. Moreover, most of the hospitals are covered by reimbursement policies that demand hospitalization of patients for delivering financial resources. Ambulatory and the special care units are considered for observation, consultation, diagnosis, and rehabilitation services and expected to hold considerable market share during the forecast period.

North America to Dominate the Market

North America dominates the diabetes ketoacidosis treatment market globally, where the U.S. holds the highest market share in the North America region. This can be attributed to the growing prevalence of DKA in the patients having type 1 diabetes in the U.S. As per the National Diabetes Statistics, close to 185,000 cases were diagnosed with diabetic Ketoacidosis in 2018. As per the American Diabetes Association, the total cost of diagnosed diabetes reached USD 327 billion in 2017 from USD 245 billion in 2012, out of which roughly 67.3% cost is covered by the government insurance. In cases of DKA medical costs, the U.S. spends more than USD 2.5 billion each year for the treatment and care of diabetic patients suffering from DKA. Higher healthcare expenditure and the strong presence of reimbursement policies covering diabetes and its complications are fueling the market growth. 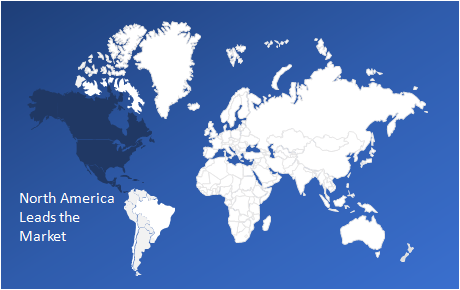 The Treatment of a Single Episode of DKA in the United Kingdom Costs GBP 1,387

Increasing diabetes patient population and rising awareness about diabetes management and control are the primary factors contributing to the market growth in Europe. According to the 2017 Report of the International Diabetes Federation, close to 66.0 million people in Europe suffer from diabetes, and this figure is projected to grow to 81.0 million by 2045. Management of DKA also incurred significant expense to the health system of the U.K.; for instance, the treatment of a single episode of DKA in the United Kingdom has been estimated to cost GBP 1,387 (around USD 1,750) to the health service. As per Diabetes U.K, roughly 2,200 people suffered from diabetic ketoacidosis (DKA) and are under insulin treatment since 2017. European people are extensively adopting newer insulin therapies, such as insulin pumps and insulin pens. Most of the European countries reported an increase in the rate of hospitalization in patients with DKA.

Asian countries have also seen a rapid increase in diabetes cases over the last few decades, especially those with type 2 diabetes. Type 1 diabetes is much rare in the Asian population. Southeast Asian countries offer growth potential, owing to the increasing prevalence of diabetes mellitus and hyperglycemia associated with DKA. Hyperglycemia in pregnancy has the highest prevalence in South-East Asia. For instance, one in fourth live births is affected by hyperglycemia during pregnancy, as per international diabetes federation. According to the International Journal of Research in Medical Sciences, 48.2% hospital admissions in Himalayan states of north India found to be of diabetic ketoacidosis (DKA). The lack of proper dosage of insulins has increased the overall number of DKA cases, resulting in the rising demand for ketoacidosis treatment in the Asia-Pacific region.

The increasing diabetic population and lack of awareness regarding its complications have increased the overall rate of mortality in the region. For instance, approximately 10.4 million people were living with undiagnosed diabetes in South America, IDF 2017. To address such issues and lessen the economic burden, South American countries have taken stringent measures to improve healthcare coverage in the past few years. For instance, countries like Argentina, Brazil, Colombia, and others have successfully provided universal health coverage, which can be attributed to increasing access to healthcare services, reducing inequalities, and increasing public spending on healthcare. This is expected to drive the market in the South America region.

More than 35,000 Children and Adolescents Suffer from Type 1 Diabetes in Saudi Arabia

In most Middle East countries, it is estimated that consumers spend about USD 17 billion on diabetes. This can be attributed to the increasing obese population, consumption of calorie-rich foods, and the sedentary nature of mundane work practices, among others. According to the Diabetes Atlas (8th edition), in Saudi Arabia, more than 35,000 children and adolescents suffer from Type 1 diabetes, which renders Saudi Arabia rank 8th in terms of the number of Type 1 diabetes patients and 4th country in the world in terms of Type 1 diabetes incidence rate, which is as high as 33.5 per 100,000 individuals. Such type 1 diabetes rate is prone to Diabetic Ketoacidosis and increased the need for diabetic treatment in the Middle East region. This has escalated the need to develop efficient diabetic management services and care.

In Africa, due to its poor healthcare services, diabetes develops faster than its capacity to manage. In the African region, a survey on diabetes indicated that diabetes and other cardiovascular diseases were leading causes of death. The African region has huge potential for the DKA treatment market, owing to huge untapped opportunities in the region.

Most of the key market players are expected to target the patient base of type 1 diabetes as they are more prone to Diabetic Ketoacidosis. Diabetes Ketoacidosis treatment market is moderately fragmented, with few significant players. Most of the prominent manufacturers are also working on innovative solutions in association with several research organizations to provide a better treatment option. The level of competition between the players is high, as each player aims to develop and offer new products at a competitive price. Some of the key market players include Novo Nordisk A/S, Sanofi., Biocon, Tonghua Dongbao Pharmaceutical Co., Ltd., Bristol-Myers Squibb Company, GlaxoSmithKline Plc., Merck & Co., Inc., Pfizer, Inc., Wockhardt., Eli Lilly and Company, and others.

In March 2019, Novo Nordisk declared its Intention to invest around USD 98 million in the renovation and development of the insulin manufacturing facility in Kalundborg, Denmark. The project is expected to complete by the end of 2020.

How much is the Diabetic Ketoacidosis Treatment Market Worth in the future?

Which is the leading segment in the Diabetic Ketoacidosis Treatment Market?

The insulin therapy type segment is expected to be leading segments in Diabetic Ketoacidosis Treatment Market during the forecast period.

What was the value of Global Diabetic Ketoacidosis Treatment Market in 2018?

Who are the active players in Diabetic Ketoacidosis Treatment Market?

Which region is expected to hold the highest market share in the Diabetic Ketoacidosis Treatment Market?