The incident and emergency management system is an integration of facilities, resources, protocols, and communications that work together to identify, analyze, and respond to emergencies. This problem is resolved by automating the preparation, scheduling, and allocation of the services needed to execute the response plan, directing the necessary details or messages to the incident command center and crisis management teams. It runs on some of its core functions, such as coordination, policy-making, operations, information gathering, and external communication, among others. Additionally, some of its benefits include efficiency, accessibility of plans, instantaneous updates, superior functionality, and usage of web-based multi-purpose data that has surged its utilization among various sectors. 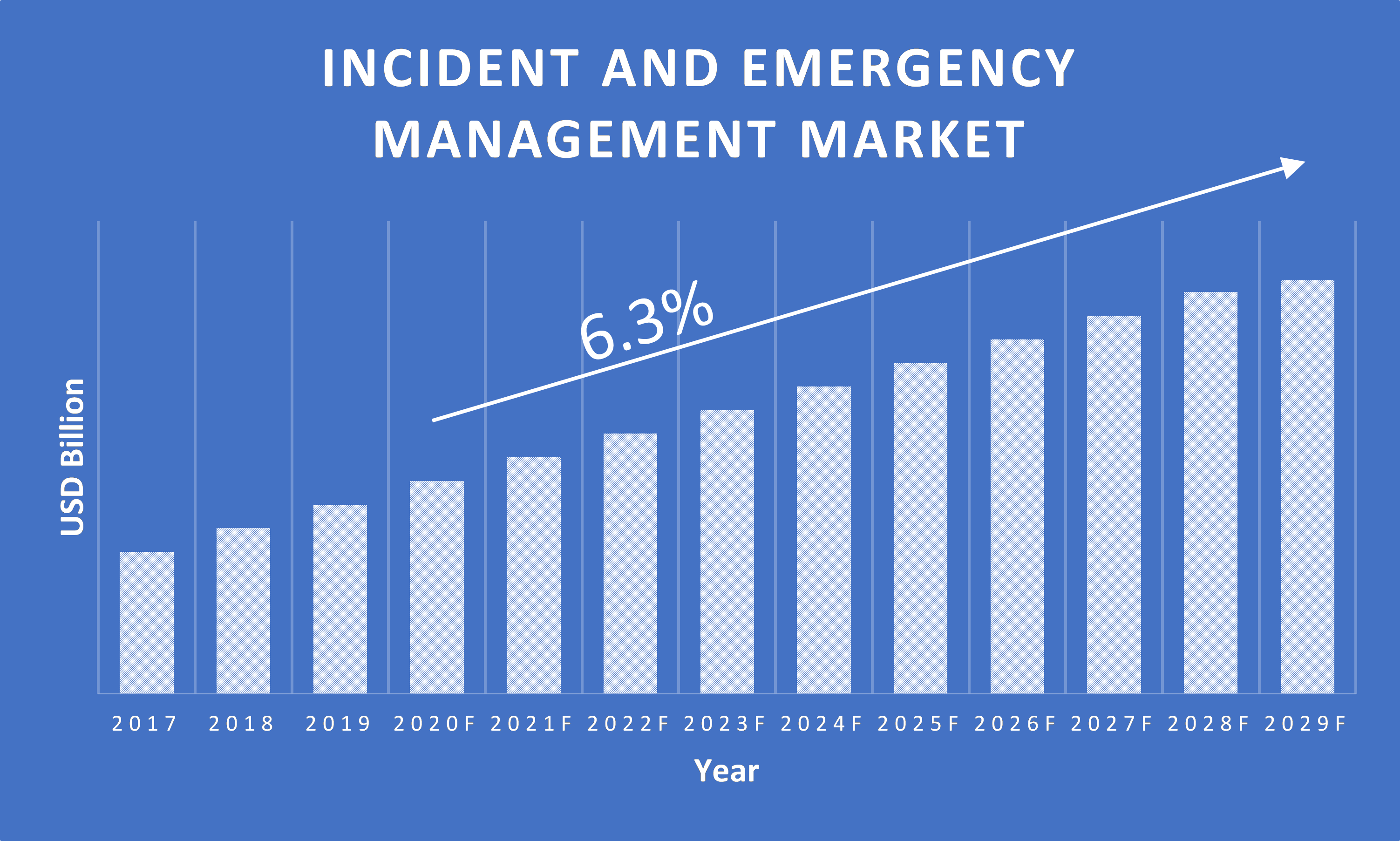 In recent times, the occurrence of natural as well as artificial disasters has increased significantly on account of the changing world dynamics based on environmental, social, political, and other factors. The Insurance Information Institute, Inc. states that there were approximately 820 major natural catastrophes in 2019 across the globe. It also stated that hydrological events were accounted for the highest share of disasters, followed by meteorological events. Besides, the growing rate of manmade disasters, such as wars, terrorist attacks, industrial, and nuclear, and chemical accidents, has led to massive losses of life and property, further driving the market growth.

Advancements in the Government Policies to Drive the Market Growth

Increasing technological advancements and the implementation of the latest software by the government positively impacts the market growth. The effective deployment of security feature, such as CCTV cameras, security alarms, and others. Furthermore, the National Incident Management System (NIMS), the National Response Framework (NRF), and the Federal Emergency Preparedness have prepared a framework for the effective coordination of the Federal, state, local, government, and non-government organizations. Countries such as the U.K., India, and France have formed special security units to deal with these incidents. In contrast, companies have hired professional organizations to train their employees about the procedures to be followed in these incidents.

Improper training, careless handling, malfunction, faulty equipment, improper atmospheric conditions, and power failure, among others, are some of the leading causes of false alarms. The surge in the number of false alarms has decreased the prominence of the incident and emergency management software. For instance, on January 14, 2018, a false alarm was sent to the mobile phone users of Hawaii, which read ‘Ballistic Missile Threat Inbound to Hawaii. Seek immediate Shelter. This is Not a Drill,’ causing a sense of fear and panic among the masses. However, later the State Governor apologized and informed it to be a false alarm. A similar incident was encountered in January 2020, wherein a similar message that awakened the residents regarding the occurrence of an incident at the Pickering Nuclear Generator, Ontario, Canada, was sent to approximately 14 million residents, creating a havoc situation.

The consulting services segment holds the largest market share on account of its immense need at the federal, state, and local levels for robust planning and processing of emergency management and preparedness infrastructure. The key players are providing consulting services to the organizations in order to ensure better proactive management of the risk and alignment of the daily activities. Some of the leading companies, such as Lockheed Martin, aid the militaries and the governments across the globe for hardening, outfitting, innovating, and using intelligent systems for the efficient incident and emergency management. The emergency operation center (EOC) design and integration segment, on the other hand, is anticipated to have the fastest growth on account of the increasing number of natural and artificial disasters.

The first responder tools segment to cater to the maximum share in the market as they extensively use the incident and emergency management software to provide robust security. The first responder tools are highly advanced and are used to transmit accurate information to the concerned individual for optimum aid. Some of the commonly available and highly advanced communication tools of the sub-segment comprise wearable devices, such as a smartwatch, smart glasses, wearable camera, Ultra High Frequency (UHF) and Very High Frequency (VHF) radios, Terrestrial Trunked Radio (TETRA), and land mobile radios.

North America dominates the incident and emergency management market on account of the rapid adoption of advanced technology, enhanced security, and the presence of key players, such as Honeywell, Lockheed Martin, Motorola Solutions, Collins Aerospace, IBM, Hexagon, Esri, MissionMode, and Alert Technologies. As stated by the Insurance Information Institute, there were approximately 61 catastrophes that hit the U.S. in 2019. The number of claims and the amount spent accounted for approximately 2.3 million and USD 24.4 billion, respectively. However, with the adoption of the latest technology and differential methods for disaster management, a negative slope was observed in the amount spent from the year 2017. Further, the increasing government spending and surging adoption of the software by various government and non-governmental organizations drives market growth.

The incident and emergency management market in Asia-Pacific is anticipated to show the fastest growth on account of the increasing government initiatives and investment for disaster management and safety. As stated by ‘The Disaster Riskscape’ across Asia-Pacific: Pathways for resilience, inclusion, and empowerment, 2019’ published by the United Nations Economic and Social Commission for Asia and the Pacific (UNESCAP), in the APAC region, a considerable downfall in the number of fatalities, people affected, and economic loss was noted in 2010–2019.

The governments of various countries have been actively investing in disaster management. For instance, the Government of India increased the yearly investment by 5% in the financial year 2019 –2020. Similarly, the Government of Japan and the World Bank partnered to form a Japan-World Bank Program for Mainstreaming Disaster Risk Management in developing countries. The program has funded over 130 technical assistance grants in over 68 countries across the globe.

What is the key factor driving Incident and Emergency Management Market?

The surge in the number of catastrophes, advancements in government policies is the key factors expected to drive Incident and Emergency Management Market during the forecast period.

What was the value of Global Incident and Emergency Management Market in 2029?

In 2029 Global Incident and Emergency Management Market was valued at USD 162 billion.

Who are the active players in Incident and Emergency Management Market?

Which region is expected to hold the highest market share in the Incident and Emergency Management Market?

North America is expected to hold the highest market share in Incident and Emergency Management Market.

Which is the leading segment in the Incident and Emergency Management Market?

The Consulting Services Segment is expected to be the leading segment in Incident and Emergency Management Market during the forecast period.

How much is the Incident and Emergency Management Market worth in the future?