Mass spectrometry is one of the most potent tools or methods for analyzing various biological and chemical entities. Many countries' economies are increasing their investments in healthcare and pharmaceuticals. Furthermore, people over the age of 65 will account for around 11.6 per cent of the global population, which is expected to boost the pharmaceutical industry significantly.

Furthermore, rising demands and the corresponding requirements to meet these demands are significant factors driving the market growth. Mass spectroscopy technology continues to improve, increasing resolution factors and speed. The development of new software and tools can increase the use of mass spectroscopy in a variety of fields, including proteomics, drug development, pharmaceuticals, and food safety testing. There are numerous mass spectrometers on the market. Spectrometers come in various types, each with its own set of advantages and costs. These factors are expected to drive the mass spectrometry market during the forecast period.

Increasing R&D investments in the pharmaceutical and biotechnology industry will drive the market.

Technological Advancement will drive the market

Technological advancements will provide higher resolution, and improved throughput are fruitful for market growth. It will enhance the way of measuring the mass-to-charge ratio of ions. The improved technical advancement will enhance the accuracy of measurement. It will present the accurate value as a mass spectrum and a plot of intensity as a function of the mass-to-charge ratio. These factors will ensure the growth of the market.

Premium Product Pricing will be the obstacle

Spectrometry contraptions are ready with superior capabilities and functionalities and are, as a result, priced at a premium. Apart from the machine's price, the price of compliance of the machine to enterprise requirements is likewise very high. Due to technological improvements and extended operational efficiencies, the call for mass spectrometers has grown. However, technological traits have extended machine prices. The rate of a spectrometer impacts the acquisition selection of quit users. Pharmaceutical corporations require many such structures, and hence, the capital price will increase significantly. Furthermore, educational studies laboratories find it hard to have enough money for such structures, as they have managed budgets. These are the foremost elements restricting the adoption of mass spectrometry structures amongst quit users.

Developing international locations, including China and India, gifts numerous possibilities for increasing the mass spectrometry market. China and India generate a massive call for mass spectrometers and hybrid spectrometry gadgets because of the Greenfield initiatives installed in numerous end-person industries in those international locations. The biopharmaceutical company of these international sites is powerful and must largely contribute to the growth of the spectrometry and chromatography markets. Key enterprise gamers are setting up new facilities, R&D facilities, and innovation facilities to take advantage of this tasty possibility in collaborations with players in the Asian market.

The market for mass spectrometry is divided into three categories: technology, application, and region.

Single quadrupole mass spectrometers have the handiest mass analyzer. They may handiest degree ions produced withinside the tool supply, which may be intact molecular ions or fragment ions produced with the aid of using in-supply fragmentation.

The market is classified into pharmaceutical, biotechnology, security, industrial chemistry, environmental testing, food & beverage testing, forensic and clinical based on the application. The pharmaceuticals segment has the largest share in the mass spectrometry market and is expected to continue its growth during the forecast period. 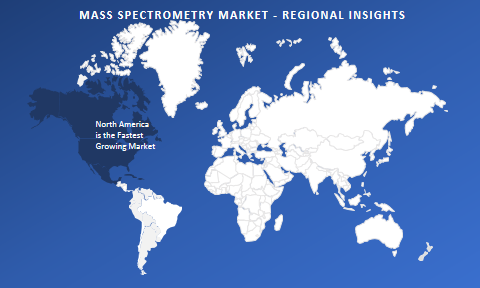 The market is expected to be dominated by North America. Pharmaceutical, biotechnology, and industrial chemistry all use mass spectrometry. Chemical industries are well-represented in North America.

This market is expected to grow significantly in Europe as well. Biotechnology is a primary industry in Europe. This is demonstrated by the fact that, rather than laying off workers after the 2008 economic downturn, the European biotech industry began to hire them. As a result, more than half of the companies increased their biotechnology research and development spending. The mass spectrometry market is expected to benefit from these factors.

This market is expected to grow significantly in the Asia Pacific region. In the food and beverage industry, mass spectrometry is also used. In the last three years, China, Hong Kong, Japan, Australia, the Philippines, Malaysia, and Singapore have reported around 400 cases of contamination. As a result of these factors, China has strengthened its food quality inspection policy. Furthermore, the growth of the Indian pharmaceutical industry may be beneficial to the mass spectrometry market.