Metal cleaning chemicals can be simple surfactant-based cleaners and degreasers or solvents. Cleaning is a crucial part of the finishing process and these chemicals are used for cleaning organic and inorganic materials such as grease, corrosion oxides, oil, and particulates present on the metal surface. They help prevent metal deterioration and damage to machinery and equipment used in various industries such as automotive, transportation, manufacturing, and aerospace. The increasing rate of metal consumption in different industries such as automotive, aerospace, manufacturing, and others is projected to drive the global metal cleaning chemicals market during the forecast period. According to India Brand Equity Foundation (IBEF), it is estimated that in 2017, the Indian automotive industry became the 4th largest in the globe with sales increasing 9.5% year-on-year to 4.02 million units. Thus, growing demand for metals from various industries is projected to drive the market growth during the forecast period. Additionally, rapid growth of the global steel industry is surging the demand for chemicals. According to the Ministry of Steel (India), initiatives such as “Make in India”, “Indian Made Steel”, and others are projected to attract significant investments in industrial verticals such as automobile, shipbuilding, infrastructure, construction, and others

By metal type, the metal cleaning chemicals market can be segmented into alloys, aluminum, steel, copper, and others. The steel segment is expected to hold a prominent market share, owing to the increasing use of steel in various industries as steel is among the most commonly used materials in the world. According to the World Steel Association, in 2016, 1,600 million tonnes of steel was produced, globally. Most of the growth can be attributed to newly industrializing nations such as Brazil, China, India, Iran, and Mexico.

By end-user, the metal cleaning chemicals market can be segmented into automotive & aerospace, electrical & electronics, manufacturing, and others. The manufacturing segment has been further sub-segmented into chemicals, healthcare, food & beverages, oil & gas and others. With the growing need to enhance the performance efficiency of metal products such as equipment and heavy machinery, reactors and tanks, and metal tools, among others, the manufacturing segment is projected to lead the market during the forecast period. 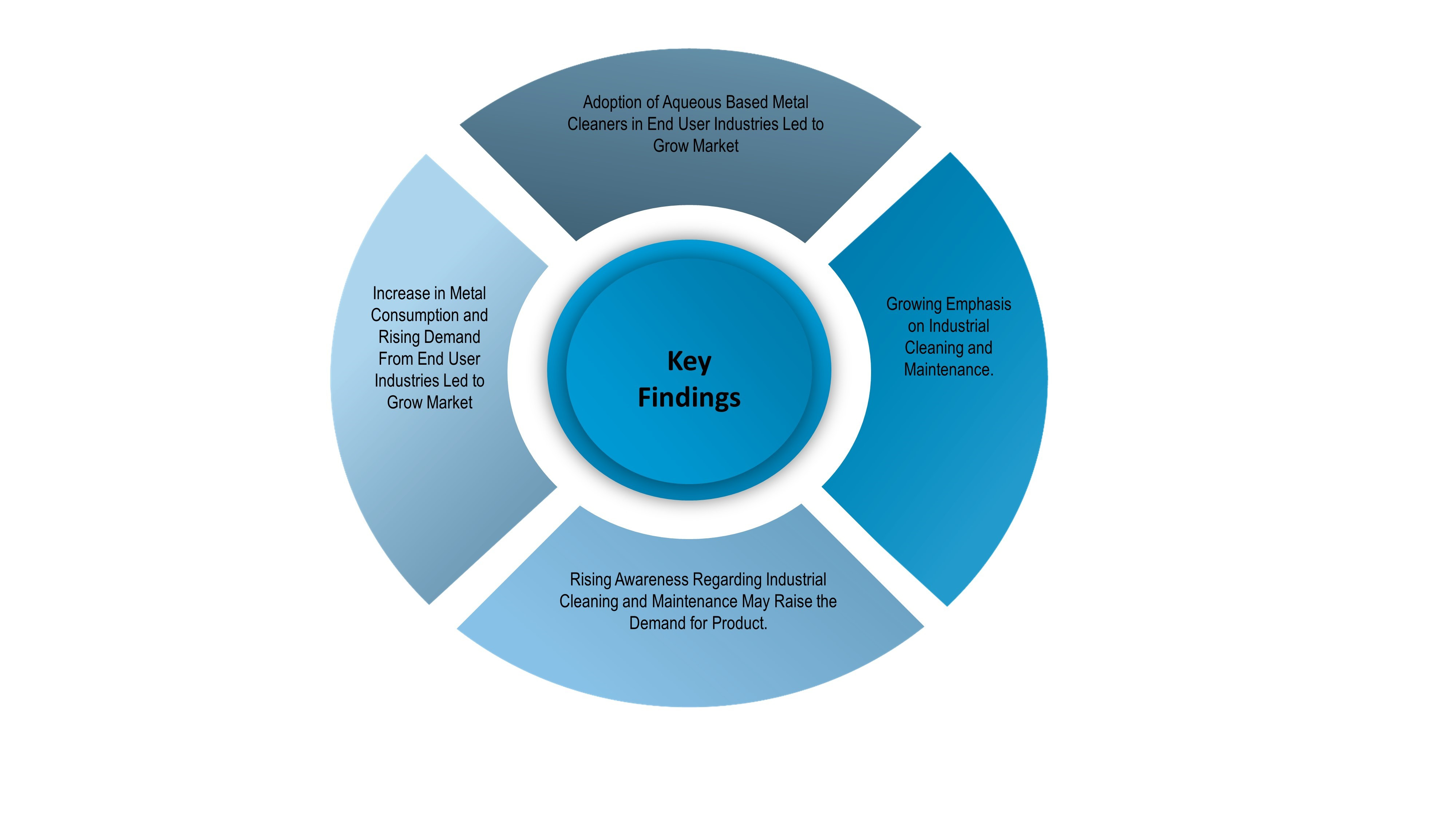 Asia Pacific is expected to lead the global metal cleaning chemicals market during the forecast period, owing to the increasing production of metals and rapidly growing industrialization in developing countries across the region. According to the World Bureau of Metal Statistics, the market demand from January 2017 to March 2017 for aluminum was pegged at 15.05 million tonnes, i.e. 1148 KT more than the first three months of 2016. Increasing manufacturing activities, especially in China, India, and Japan are estimated to further boost market growth.

Europe is projected to witness remarkable growth, owing to the region’s well-developed industrial sector and high spending on improved product quality. Moreover, favorable government policies in Europe are also augmenting market growth. Germany, France, and the UK hold prominent shares in the Europe market, due to the significant consumption of metal cleaning chemicals in these economies.

North America is expected to witness substantial growth during the assessment period, owing to the growth of various industries, and stringent regulations regarding product quality. Additionally, the region’s rising production capacity of metal cleaning chemicals is also expected to fuel market growth in the coming years.

The Middle East and Africa metal cleaning chemicals market is expected to witness steady growth during the forecasted period, owing to stringent regulations regarding the use of toxic chemicals.

Latin America is slated to register steady economic growth, coupled with healthy demand for chemicals and finished goods makes; therefore, the region is pegged to remain attractive in terms of export.

Which Future Developments Are Expected to Impact the Metal Cleaning Chemicals Market? 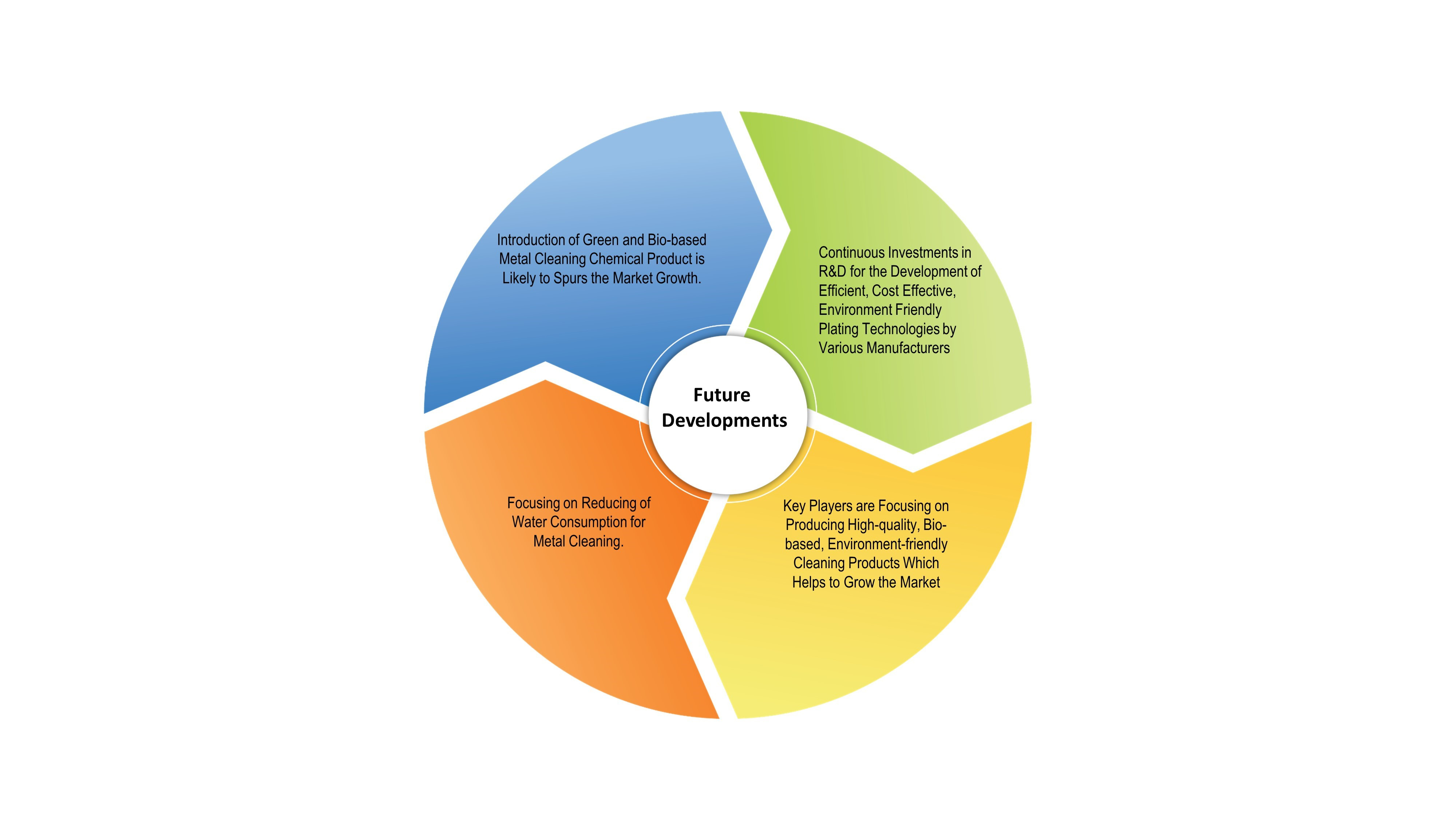 The Metal Cleaning Chemicals Market market is studied from 2019–2026.

Which region has largest share in Metal Cleaning Chemicals Market?

What are the high growth ingredients in metal cleaning?

Surfactant was the largest segment in the global metal cleaning chemical market in 2019.

Who are the key players in Metal Cleaning Chemicals Market?