The global mine ventilation market is expected to register a significant growth rate, owing to the pressing requirements of safe working conditions and fresh airflow for the workers. There is a high demand for ventilation in underground mining as compared to surface mining due to tougher working conditions and concentration of hazardous toxic gases that can have adverse health effects. Increased cooled airflow in mines ensures a healthy working environment and increased productivity. Deep and coal mine workers suffer the worst health impacts due to the absence of cool and fresh air. Excessive heat due to rock temperature, machinery, auto compression, and fissure water must e released to maintain climatic balance. 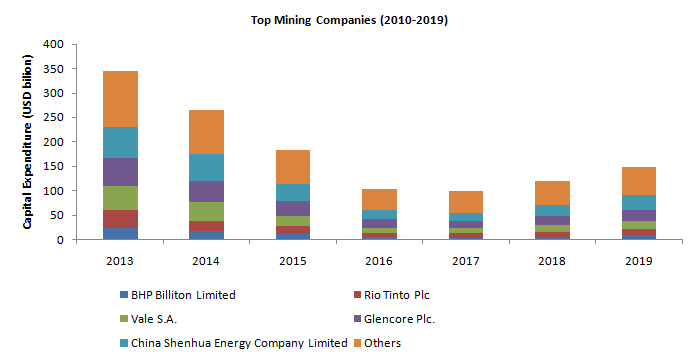 The COVID-19 Outbreak’s Impact on the Global Mining Industry

Restrictions brought forth by governments in light of the COVID-19 outbreak have put a lot of pressure on mining companies operating in affected countries such as China, Italy, and others. Key vendors such as Rio Tinto and Anglo American have reported a massive slowdown in production in recent months. Oyu Tolgoi project in Mongolia has been suspended as the Mongolian government tightened restrictions following the country’s first confirmed COVID-19 case. Anglo American demobilized most of the 10,000-strong construction workforce at its Qullaveco copper project in Peru, after the announcement of a 15-day quarantine to curb the spread of COVID-19 in the region.

A Brief History of Mine Ventilation

Movements of air in deep mines have always been a fascinating subject for researchers. Huge tunnels were dug into chalk deposits in European mines in 4000-1200 BC. Miners then used brushwood fires to weaken rocks that induced currents of air. However, it was not until the medieval times that the ability of fire to promote airflow was rediscovered by the Greeks.  Greeks were one of the first miners to lay emphasis on the need for a connected ventilating circuit in their Laurium silver mines. Historical data reveals that divided shafts were used to provide separate air intake in ancient mines. Romans often had twin shafts in underground mines, and slaves used palm fronds to waft air through tunnels

The industrial revolution of the 17th century brought about a remarkable upturn in demand for coal and other minerals. Explosives and poisonous gases in deep mines were said to be reported in papers. Initial ventilations were induced by equating air temperatures on the surface and underground or through the ancient method of fire, both of which proved to be fatal to men, women, and children working in or around such mines. The 18th century witnessed an increased demand for safety in the mining atmosphere, which revolutionized the study of underground mines leading to ventilation planning. Researchers began studying the behavior of airflow by using thermodynamic analyses. Analog computers were used in the second half of the 20th century to facilitate ventilation in extreme conditions. Since then, experts have been involved in many discoveries and re-discoveries to provide an acceptable atmospheric condition for efficient operations in future mines.

The quality airflow demand in underground and surface mines and high risk of worker health conditions due to lack of fresh air is significantly driving the mine ventilation market. The growing number of infrastructural projects has increased the demand for heating and cooling systems to maintain temperature balance during long working hours. Heating systems often keep temperatures high to prevent the accumulation of ice in mines in colder regions. Mechanical cooling provides thermal conditions to minimize heat stress in mines.

The lack of infrastructural support to install efficient air inflow and outflow mechanisms as well as high cost and maintenance charges is hampering the market growth. It is quite expensive to heat and cool mine ventilation air and moves it to the bottom of the shaft and through the mine airways. However, authorities are devising ways to modify the surplus mine ventilation air systems to attain financial and environmental stability

To address the aforementioned challenges, mining leaders are exploiting ventilation methods and auxiliary equipment areas to improve the mine airflow and optimize mine development. Researchers are also examining mine airway utilization and alternative ventilation methods to obtain contamination-free air for workers and mine personnel. Highly sophisticated fire alerts, sensors, and alarm systems are under also being incorporated to prevent fumes from entering the intake airway or escape way.

The Need for Air Monitoring and Airflow Measure Rate

The growing requirement of air monitoring in modern mines and measurements of airflow rate, direction, gas levels, temperature, and pressure in real-time is further bolstering the market growth. Rising consumer demand to increase production, improve miner worker safety, and reduce energy consumption is compelling manufacturers to design digitally controlled ventilation systems. Oil and gas industries are contributing to the increased demand for surface mining equipment for carrying out excavating processes. ABB is offering the Ability Ventilation Optimizer that can capture real-time data through a series of airflow tracking sensors. The company then builds and analyses the empirical model extracted from the data to ensure the efficient distribution of air inside the mines.  Digital optimization has increased the mining operators’ demand to have a 24/7 working model, which guarantees the right amount of air delivery.

Surface mining is emerging as the dominating segment in the North American mining industry. The U.S., Canada, and Mexico are focusing on various approaches for the extraction of metals and minerals. The top 40 globally ranked mining leaders include North American players such as Grupo Mexico S.A.B., de C.V., Freeport-McMoRan Inc., and Barrick Gold Corporation. The rising demand for mineral exploration and safety concerns of workers has grabbed the attention of mining experts to install suitable ventilation and air purifying systems to prevent the detrimental effects of toxic gases on miners. The U.S. is expected to lead in the mine ventilation and safety equipment market among other countries as it is the largest producer of coal.

Global tensions, which are threatening the raw material imports, are forcing policymakers in Europe to hunt for new mining opportunities. The mining industry has remained limited in the region as it mostly imports raw materials from other parts of the globe. However, some of the minerals used for infrastructure, building, roads, and production of steel, cars, computers, medicines, and fertilizers are mined in Sweden, Finland, Germany, and the U.K. Europe employs more than 200,000 workers directly in the extraction and beneficiation of metals and minerals. Adverse environmental conditions in deep underground mines leading to health issues have increased the demand for cooling systems, adequate lighting, and ventilation. Costs associated with ventilation systems have urged local authorities to seal unused sections of the mine and switch from diesel to electric machines.

China — The Home for a Slew of Mines

An increase in raw material demand, infrastructural developments in emerging economies, and the flourishing mining operations are likely to make Asia-Pacific the fastest-growing region in the global mine ventilation market during the forecast period. China houses a large number of mines due to its booming construction sector. Bauxite, copper, aluminum, gold, and coal reserves are abundant in India, Australia, and other Southeast Asian nations, which is anticipated to boost mining activities and increase the demand for mining ventilation to maximize productivity.

The SAMEA Region to Expand in Light of Substantial Investment

South America and the Middle East and Africa mine (SAMEA) ventilation market is expected to expand, owing to increasing investments in the mining sector among these regions. South America has approximately 13,290 identified mines that are mostly utilized to extract Copper, Gold, and Silver. Peru has some of the largest mines, along with Brazil, Argentina, and Colombia. Africa accounts for over 30% of the world’s global mineral reserves, whereas in the Middle East, much of the land is yet to be explored using modern techniques and equipment. Foreign investments and government support is foreseen to help boost automation, transportation and logistics segments in the region’s mining industry in the upcoming years.

In April 2019, Maestro Digital Mine launched, Zephyr AQS, a compact, low-cost environmental air quality monitoring station for underground mines. It is a digital IIoT device that connects to an industrial network without any need of expensive programmable logic controllers (PLCs) and analog instruments

What is the key factor driving Mine Ventilation Market?

Growing requirement of air monitoring in modern mines and measurements of airflow rate, lack of infrastructural support to install efficient air inflow and outflow mechanism as well as high cost are the key factors expected to drive Mine Ventilation Market during the forecast period.

Who are the active players in Mine Ventilation Market?

Which region is expected to hold the highest market share in the Mine Ventilation Market?

North America is expected to hold the highest market share in Mine Ventilation Market.

Which is the leading segment in the Mine Ventilation Market?

Surface Mining Segment is expected to be the leading segment in Mine Ventilation Market during the forecast period.