Citrus family fruits, such as grapefruit, orange, lemon, and tangerine, are typical fruits that grow in tropical and subtropical regions. Nutritionally, these fruits are valuable as they have a rich content of vitamins (especially vitamin C) and antioxidants, but at the same time, they contain high amounts of bitter compounds. Two main types of bitterness occur in citrus fruits, caused by two different types of compounds, naringin in grapefruit and neohesperidin in sour orange. Naringin occurs primarily in grapefruits in the flavedo, albedo, and segment membranes and less in the juice vesicles.

Some of the most important sources of naringin include grapefruit/pummelo hybrid, pure juice (45 mg/100ml), grapefruit juice from concentrate (38 mg/100ml), and rosemary fresh (55 mg/100g FW). In addition to this, naringin is considered to have many advantages such as low caloric, innocuity, and safety due to which it can be used in edible, medicine, and commodity trade. Key players often use the extracts of naringin in making ice cream, chocolate, or tonic style beverages to enhance flavor.

It exerts excellent antioxidant properties due to the hydroxyl groups that are attached to the aromatic rings. It also contains cardioprotective, antimicrobial, anti-carcinogenetic properties, as well as anti-inflammatory, anti-viral properties, and anti-allergic properties. Furthermore, naringin has a wide variety of pharmacological effects, such as reduced neurologic residua following a stroke, reduced risk of cancer, and lower serum lipid levels. Therefore, the wide variety of applications in food, pharma, and other sectors use naringin to treat several diseases. However, growing concerns about its toxicity level may restrict the growth of this market.

The naringin extracts are primarily used in the pharma industry for its therapeutic properties, such as antioxidant, antimicrobial, anti-carcinogenetic, cardioprotective, anti-viral properties, anti-allergic properties, and anti-inflammatory properties. It has the ability to reduce the number of diseases, such as dyslipidemia, diabetes, cardiovascular diseases, and cancer. The global burden of cancer is expected to reach 21.7 million new cancer cases and 13 million cancer deaths by 2030, according to the data shared by the International Agency for Research on Cancer (IARC).

A high-fat diet is responsible for the development of metabolic syndrome both in humans as well as in animals. This syndrome is a cluster of diseases that includes insulin-resistant diabetes, dyslipidemia, hypertension, and central obesity. Therefore, plant-derived flavonoid naringin is used for the treatment of metabolic syndrome due to its antioxidant activity and the ability to regulate cytokines.

The use of naringin also helps in lowering cholesterol. It reduces LDL oxiation and can also help in preventing hypercholesterolemia and inhibits certain cytochrome P450 enzymes (e.g., CYP3A4 and CYP1A2). It also inhibits vascular endothelial growth factor (VEGF) release, which further induces angiogenesis. Hence, due to excellent therapeutic properties, the demand for naringin is expected to rise in the near future.

Growing Prevalence of Diseases to Augment the Demand for Naringin Extracts

Since the naringin is a flavanone plant with lots of beneficial and therapeutic properties, the growing number of diseases across the globe is expected to boost the growth of this market. Naringin extracts are not only used in the food and feed additives but also used in the pharma and healthcare industries to treat various kinds of diseases.

As per the Institute for Health Metrics and Evaluation, in the U.S, Ischemic heart disease, neonatal disorders, stroke, lower respiratory infections, diarrhea, road injuries, and chronic obstructive pulmonary disease (COPD) accounted for more than 1 million deaths each worldwide in the year 2017. Moreover, around 15 million people have reported severe joint pain in the country. Around 20% of the population suffers from some kind of acute pain every day or on most days, as per the data shared by the Centers for Disease Control and Prevention (CDC). 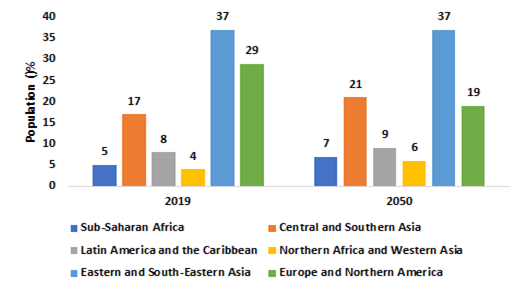 Debouching Trends of Healthy Living to Drive the Market Growth

The rise in health concerns among the population due to the surging prevalence of umpteen diseases is projected to increase the demand for naringin extracts. People prefer healthy foods in order to keep themselves fit, which is expected to boost the demand for naringin as it is a great source of vitamins, especially vitamin C, and helps in fighting many diseases. Moreover, these bioflavonoid are mainly used in supplement manufacturing, further providing an impetus to the market growth.

The typical concentration of naringin in grapefruit juice is around 400 mg/l, and LD50 of naringin in rodents is about 2000 mg/kg. This flavanone plant inhibits some drug-metabolizing cytochrome P450 enzymes, which includes CYP3A4 and CYP1A2, and may further result in drug-drug interactions. In addition to this, the ingestion of naringin and related flavonoids can affect the intestinal absorption of certain drugs, which can lead to either an increase or a decrease in circulating drug levels. It has been advised not to consume citrus and other juices, especially grapefruit or related ingredients, in order to avoid interference with drug absorption and metabolism.

What is the key factor driving Naringin Extract Market?

Growing prevalence of diseases, growing geriatric population across the globe, increase the demand for medicines are the key factors expected to drive Naringin Extract Market during forecast period.

Who are the active players in Naringin Extract Market?

Which region is expected to hold the highest market share in the Naringin Extract Market?

Which is the leading segment in the Naringin Extract Market?

Pharma and Healthcare Application Segment is expected to be leading segment in Naringin Extract Market during the forecast period.