The automation sector is growing at an astounding rate, thus changing the course of associated technologies. It is potentially influencing the original equipment manufacturers (OEM’s), suppliers, retailers, and the aftermarket with new technologies, business models, and innovations. Predictive vehicle technology is one of the technologies emerging as a popular trend. This technology is a set of vehicle technologies that incorporates predictive analytics with the use of historical and real-time data that forecast behavior, activity, and faults that obstruct vehicle operations. The global vehicle sales are witnessing remarkable growth over the years. According to the Ministry of International Trade and Industry, global sales grew by 2% i.e., from 81.5 million units to 84.6 million units of automobiles in 2016–2017. This surge is a result of the increasing popularity of green cars and automobiles across the globe. Some prominent regions such as China, India, Japan, South Korea, etc are opportunistic markets for predictive technology. 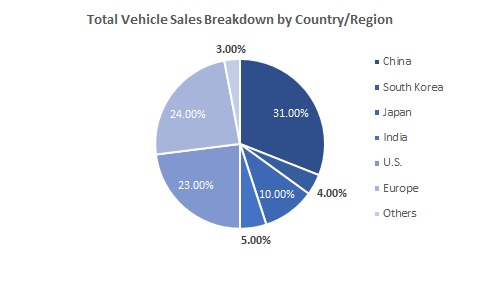 City populations across the globe are booming; about half of the world’s population, i.e. close to 3.7 billion people reside in urban areas. This number is estimated to surge by 66% by 2050. (Source: World Economic Forum). As urban consumers have a penchant for sophistication and digitalization in how they work, live, buy, and communicate, they eventually prefer premium mobility. Thus, managing the ever-increasing urban environments compelled notable automotive players to adopt such versatile technologies.

The global economy is dramatically transforming into a digital marketplace with the advent of technologies such as big data and analytics, cloud computing, sensors, and the internet of things (IoT) in sectors such as e-commerce, mobility and broadband connectivity, and social media. According to the World Economic Forum, there will be more than 38.1 billion connected devices, as a consequence, the crucial challenge of the automobile industry is to adopt and sustain such an environment with connected devices complementing the predictive vehicle technology.

The burgeoning production of passenger vehicles in the regions across the globe offers several opportunities for the predictive vehicle technology market.

The below table shows the production of passenger vehicles in the fourth quarter of 2018 for regions such as North America, Europe, South America, Asia, and Africa.

The increasing number of accidents of passenger vehicles among these regions is anticipated to fuel the deployment of predictive vehicle technology in the future automotive models to ensure passenger safety and reduce the fatality rates. According to the Organization for Economic Co-operation and Development (OECD), in 2017, India accounted for about 147,913 deaths in road accidents. Such a scenario is foreseen to trigger the adoption rate of vehicle security measures, thus creating a promising market for predictive vehicle technology.

The increasing collision rates in countries such as the U.S. and Canada indicates the pressing need for safety measures such as predictive vehicle technology in the automobile sector. According to the National Highway Traffic Safety Administration (NHTSA), in 2017, roughly 37,133 people were subjected to motor fatalities in the U.S. Similarly, the Government of Canada registered close to 1,679 motor fatalities in 2017. The pro-active alert system offered by predictive vehicle technology is an ideal solution to prevent motor fatalities as it prompts beforehand impending on-road dangers such as sudden and uncontrollable turns by heavy vehicles and careless overtaking. Like any other region, North America is eagerly following the motive of reshaping its automotive sector that fits the requisite safety and security parameters. Several regulations drafted by the U.S. and Canadian regulatory bodies underpin this motive, thus encouraging the adoption of Advanced Driver-Assistance Systems (ADAS) and associated safety modules.

Countries such as China, Japan, Australia, India, and others are determined to develop their industrial verticals, such as automotive, to sustain global standards and competitiveness. As per the global scenario, Europe and North America are rapidly adopting measures to effectuate the idea of autonomous vehicles or driverless mobility. As a consequence, well-established sectors such as China and Japan are striving toward meeting the global benchmark. According to the International Trade Administration (ITA), China drafted “The Connected Vehicle Industry Development Plan 2020” that demands for at least 50% of the vehicles to be equipped with partial assistance (PA), driver assistance (DA), or conditional assistance (CA), and to attain this demand, the extensive deployment of predictive vehicle technology is imperative. Also, the emergence of the “Action Plan for Realizing Automated Driving” drafted by the “Panel on Business Strategies on Automated Driving” in China for devising an ideal future vision for autonomous driving provides untapped prospects for the predictive vehicle technology to grow as it involves advanced driver-assistance system.

Brazil Picked Up Growth Regardless of the Consequent Recession Situation

Brazil, the UAE, Argentina, and South Africa that are emerging in the automotive sector. The United Arab Emirates (UAE), Saudi Arabia, and Abu Dhabi are subsequently inclining toward a service-oriented model with a focus on customer safety and experience. Brazil endured a consequent recession of four years until 2016 in its automotive sector; however, in 2017, the country resumed growth. According to the Presidency of the Republic of Brazil, in 2017, automobile production rose by 25.2% producing about 2.7 million vehicles with a 9.2% leap in sales. In light of these digits, the predictive vehicle technology market is foreseen to experience sizable growth in the LAMEA region.

Why Buy this Report?

Which region is expected to hold the highest market share in the Predictive Vehicle Technology Market?

Who are the active players in Predictive Vehicle Technology Market?

What is the key factor driving Predictive Vehicle Technology Market?

Rising awareness regarding predictive technology, an increasing the number of accidents of passenger vehicles are the key factors expected to drive Predictive Vehicle Technology Market during the forecast period.

Which is the leading segment in the Predictive Vehicle Technology Market?

Cloud-based Deployment Segment is expected to be the leading segment in Predictive Vehicle Technology Market during the forecast period.