Prosthetics improve the function and lifestyle of individuals that do not have limbs or have lost it due to an accidental mishap. It is a unique integration of materials, alignment, design, and structure that matches the individual’s functional needs. Increasing cases of osteosarcoma have surged the demand for prosthetics foot. As per the National Cancer Institute, approximately 3,450 new cases of bone and joint cancer erupted in the year 2018, which led to 1,590 deaths globally. The Association of Medical Research Charities (AMRC) states that osteosarcoma is the most common bone tumor in children, and every year as many as 30 new children are diagnosed with the disease in the U.K. as of 2018.

The rising prevalence of diabetes, vascular diseases, osteoarthritis, and obesity has surged the demand for prosthetic foot globally. There has been a rapid increase in road accidents and sports injuries, which leads to permanent or damaging of limbs and legs. Motorcyclists are basically more likely to injure their legs and feet as compared to any other part of their bodies. The Centre for Disease Control (CDC), in its report, declared that nearly 30% of the injuries of a million motorcyclists occurred to the lower extremities.

The resurgence demand for medical devices around the globe drives the prosthetic foot market. Globally, the healthcare sector has taken steps to introduce different types of prosthetic feet to help patients. As per the Amputee Coalition association, there are almost 2 million people living with limb loss in the U.S. The prime reason for limb loss is a vascular disease (54%) that includes diabetes. The peripheral arterial disease includes 45% trauma and less than 2% cancer. Nearly 185,000 amputations occur in the U.S. every year.

Growing health expenditure and government investments in healthcare devices is projected to boost the demand for the prosthetic foot. In light of the flourishing healthcare sector, surging research and development expenditures and funds by private hospitals and governments drive the market growth. According to the American government association, ‘Research America,’ the total U.S. medical and health R&D spending was valued at USD 171.8 billion in the year 2016.

The U.S. Investments in Medical and Health Research and Development Industry invested almost USD 115.9 billion in medical and health R&D. Furthermore, in the year 2016, the Federal agencies funded a total of USD 37.6 billion, with the National Institutes of Health, which accounted for almost USD 30.5 billion. Below is the current health expenditure of the world from the year 2011 to 2017. 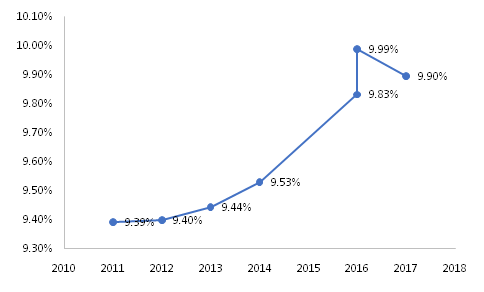 Diabetes has been a severe problem for many ages. According to the American Orthotic & Prosthetic Association and the American Diabetes Association (ADA), the risk of losing a foot is 15 to 40 times higher amongst people who have a history of diabetes. As per the statistics, as many as 80,000 diabetes-related lower limb amputations are done each year in the U.S.

Figure 2: Number of Adults (20–79 years) with diabetes Worldwide (in millions) 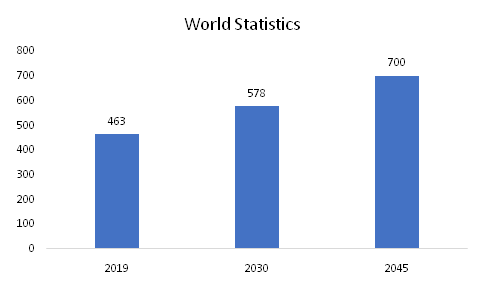 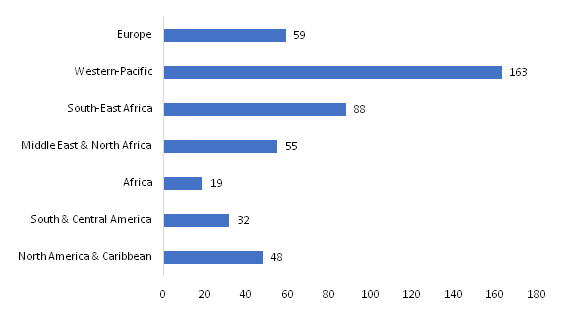 Diabetes is a prevalent illness today and is on a continuous rise, particularly in middle-income nations. As per the World Health Organization, the number of people affected by diabetes has gone up from 108 million in the year 1980 to 422 million in 2014. The worldwide predominance of diabetes among adults over 18 years of age increased to 8.5% in the year 2014 from 4.7% in 1980. It was observed that between 2000 and 2016, there was a 5% increase in premature mortality from diabetes alone.  Approximately 1.6 million deaths were directly inflicted by diabetes in 2016.

The recent developments in medical technology are compelling healthcare companies to pursue novel market opportunities. As a result, these companies are creating affordable, easy-to-use prosthetic feet for people who are in need of one. Some of the Middle East countries are striving for better healthcare facilities, which are compelling prosthetic foot manufacturers to produce better products.

A rapid increase in the number of diabetes cases has nudged medical technology companies to make advanced prosthetic feet. Unfortunately, Africa has some countries that are still struggling with better healthcare facilities and medical support. Also, diabetes imposes a large economic burden on the healthcare system worldwide. The prevalence of diabetes in some regions of the Middle East and Africa offers enormous opportunities for the prosthetic foot market. 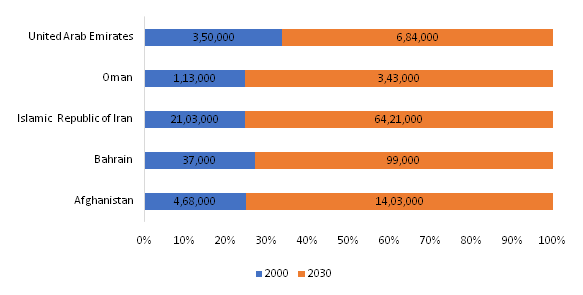 What is the key factor driving Prosthetic Foot Market?

Who are the active players in Prosthetic Foot Market?

Which region is expected to hold the highest market share in the Prosthetic Foot Market?

The Middle East and Africa are expected to hold the highest market share in Prosthetic Foot Market.

Which is the leading segment in the Prosthetic Foot Market?

Microprocessor Foot Segment is expected to be the leading segment in Prosthetic Foot Market during the forecast period.