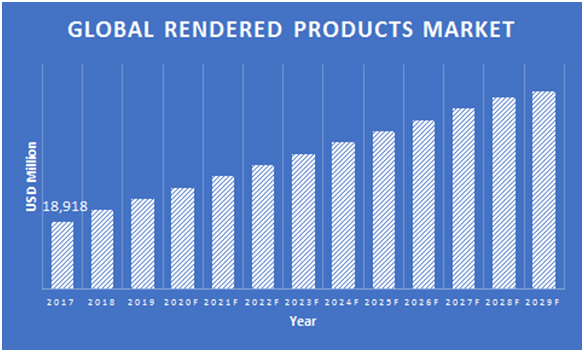 Rendering is a process that converts by-products generated from the meat and livestock industry into useable material. Animal products that are not consumed by humans, such as bones, blood, fats, and others, are subjected to the rendering process to produce useful products. Meat and bone meal, meat meal, poultry meal, hydrolyzed feather meal, blood meal, fish meal, and animal fats are some of the primary products obtained from the rendering process.

There has been a conscious effort by several organizations to spread awareness about the catastrophic effects of climate change due to land and water pollution and the emission of greenhouse gases. Furthermore, there has been a considerable increase in the consumption of non-vegetarian meals, especially in the eastern part of the world. This growth in the consumption of products such as beef, meat, and poultry is expected to have a positive impact on the revenues earned by companies involved in rendered products. For instance, the total export of bovine meat was pegged at around USD 20.6 billionin 2016, which went up to USD 22 billion in 2017, as per the Observatory of Economic Complexity.

Animal by-products have been rendered for a long time, and there has been considerable research with regards to the process. The market has the potential to accommodate many small and medium-sized players, but vertical integration from large conglomerates such as Cargill and Tyson Foods is likely to make this market oligopolistic in nature.

Changing demographics in South Asia and the Middle East and the growth of international tourism have seen a significant share of the population try non-vegetarian delicacies, compelling hotels and restaurants to partner with businesses involved in rendering animal by-products. Furthermore, there has also been an increase in pet adoption, especially among urban dwellers, which has accelerated the demand for pet feed, an end-use application for animal by-products.

An increase in the global population is likely to lead to growth in the number of people consuming meat. The U.S., Australia, Argentina, Uruguay, Israel, Brazil, Chile, Canada, the European Union, and New Zealand are among the leading consumers of meat. Some of these economies have witnessed exceptional economic growth, while some are emerging economies with inexpensive labor and plentiful resources. Across economies, several stringent regulations are being levied on various sectors to restrict greenhouse gas (GHG) emissions while strictly regulating the quality of food.

Rendering facilities are likely to expand their manufacturing sites in emerging economies, which will foster a trend where these facilities prefer machinery big enough to accommodate the increasing demand for rendered products, which can be installed on one site. The availability of a machine that can handle large volumes on a single site is expected to lead to reduced transportation costs, and single-site presence will also aid in overlooking daily operations and ensuring effectiveness. For instance, Haarslev, one of the prominent players engaged in serving the rendering products sector, has installed the Haarslev US 3200, which is the biggest continuous cooker installed in Brazil. This cooker has the ability to process around 400 tons/day of poultry by-products.

Rising water pollution and a decline in the availability of freshwater are surging the demand for machines that also can be used for wastewater treatment for protecting downstream equipment such as pumps from clogging. For instance, JWC Environmental is offering equipment that can recover solids from wastewater, process wastewater, and protect equipment engaged in downstream operations. Such installations are expected to register strong demand from Europe and North America, where the number of stringent regulations is on the higher side compared to other regions.

Today, rendered products are used in an array of industries that are engaged in the manufacturing of biodiesel, pet food, fish food, animal feed, fertilizer, and biogas fuel, among others. They provide viable alternative products and help in lowering the greenhouse gas (GHG) effect. For instance, an estimated 17.48 million metric tons of CO2 is removed annually from rendered products consisting of raw materials such as animal fat, meat and bone meal, poultry by-product meal, feather meal, pork meal, and blood products. As per the Environmental Protection Agency (EPA), acar can emit up to 5.46 metric tons of carbon. Rendering helps in mitigating emissions from around 3 million cars every year.

Economies around the world are focusing on reducing their carbon footprint and shifting to eco-friendly alternatives while fulfilling their goals of economic advancement. Several laws and incentives which have been mandated by various civil authorities in some of the major economies, which have further increased the focus on using alternative fuels or fuel additives to reduce carbon emission. Rapid industrial developments and growth in the adoption of environment-friendly fuel are likely to upsurge the demand for rendered products in making biodiesel. For instance, as per the Alternative Fuels Data Center (U.S.), over 190 biodiesel stations are present across the U.S. and Canada, and the number is likely to increase further in the coming period.

Growing research partnerships among economies and universities have fueled the growth of the aquaculture industry. It has been found that some of the rendered products are heavily used in aquaculture as a food. In 2016, 171 million tons of fish was produced globally, out of which aquaculture contributed 47% to the total production. Aquaculture production increased by over 21 million tons since 2010. Apart from this, rendered products are used for manufacturing fertilizers. Agriculturally dominant economies such as China, India, and Brazil are driving the demand for fertilizers in a bid to increase the crop yield and fulfill the growing demand for food. In 2018, India witnessed an 11% growth in the production of fertilizer compared to 2017.

In the last few years, the demand for personal care products such as cosmetics and soaps has exponentially increased because of growing consumer spending and easy access to the product through the internet. The rise in the trade of personal care products is likely to propel the growth of rendered products in the years to come. For instance, soap export was valued at USD 6,150 million in the year 2016, which grew to around USD 6,230 million in 2017. In addition to this, growth in pet adoption, especially in economies with a high presence of urban population, is likely to spur the demand for rendered products in manufacturing pet food, especially in Europe, because of the region’s considerably high rate of pet adoption. For instance, as of 2018, around 103.8 million cats and 85.2 million dogs were adopted across Europe.

The U.S. and Canada are among the largest consumers of meat, which results in high waste generation of animal carcass, providing a considerable amount of raw materials for the rendering industry in North America. This adequate supply of raw materials is likely to lead to a smoother supply chain, resulting in the setting up of a high number of rendering facilities. For instance, around 250 rendering facilities in the U.S. and 29 facilities in Canada serve animal industries by utilizing the by-products. These by-products exceed half of the total volume produced by animal farming activities. The high presence of rendering facilities in North America is likely to lead to a highly competitive landscape.

The Rendering products sector in North America recycles around 80–90% of discarded animal material from poultry and livestock farming and other activities. The industry generates annual revenue of around USD 3500 million and produces over 72 million kg of raw materials each day. Furthermore, the overall transportation infrastructure of North America is highly developed, which aids in the efficient transportation of raw materials for use in the manufacturing of rendered products. In addition, Mexico, the U.S., and Canada are governed by the North America Free Trade Agreement (NAFTA), which ensures the free movement of goods at a considerably lower import price, which further aids market growth. However, owing to the already developed rendering products market in this region, the scope of growth for new manufacturers is likely to be low compared to other regions in the world.

Previous
Next
Global
By Source

Previous
Next
Global
By Application