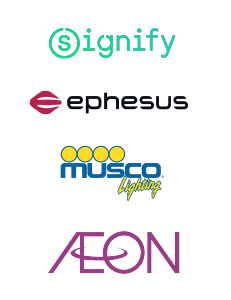 Increasing Adoption of IoT, Big Data, and analytics, implementation of green activities, and the increasing popularity of sports events, concerts, and outdoor events are the factors fueling the market growth. However, the high cost of equipment and lack of standardization hinders the market growth.

The global stadium lighting market was valued at USD 8.05 billion in 2019, growing at a CAGR of 4.4% during the forecast period. 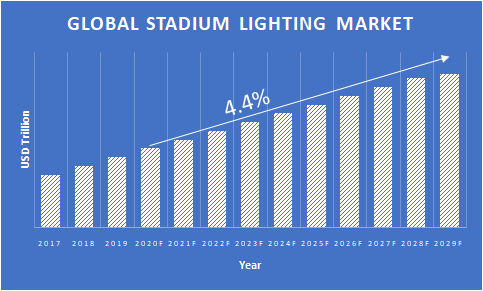 Escalating usage of energy sources is resulting in the increasing level of energy dissipation and carbon emissions, thereby demanding sustainable and efficient use of energy. Traditional stadium lighting systems emit a considerable amount of heat as well as carbon to the atmosphere, resulting in various harmful effects on the environment. The growing concerns regarding ozone depletion and global warming have pressed the governments of developed and developing nations to control the global carbon footprint. Governments around the globe are imposing stricter regulations to limit light emissions, and this is forcing many stadium authorities to shift towards LEDs, further contributing to the market growth.

Extensive Adoption and Myriad of Features of LED Lighting

Notable stadium lighting manufacturers started utilizing the LED instruments due to the benefits it provides. The enhanced capabilities of LEDs in conjunction with its cost-effectiveness are creating lucrative opportunities in outdoor lighting, especially in stadium lighting. LED instruments can be directly controlled by DMX and do not require additional dimmers making it more preferable for stadium lighting. LED instruments are also employed in areas where a high amount of heat-producing conventional stage fixtures is not ideal. The lightweight nature of the LED lights makes it even more convenient for its usage. According to the U.S Department of Energy, the average lifespan of an LED is 25,000 hours.

The primary drivers facilitating the growth of the LED segment are falling prices of LED lighting, a rise in the global LED penetration, rising industrial demand for efficient power lighting, favorable government policies, and weeding out of conventional lighting. Moreover, governments around the globe are encouraging the use of LEDs in private and public spaces. Ban on inefficient lighting by the European Union, the U.S, and Canada, and the Chinese government’s decision to adopt LED lighting ahead of its ban contributed to the growth of the LED segment in every sector.

Growing Number of Stadiums Contributing to the Market Growth

Sweeping changes are cropping up in the outdoor stadium's reformation where international and national matches are played. The outmoded conventional lighting fixtures are supplanted to provide a better experience to the audience. Home stadiums of the National Football League’s Houston Texans and Arizona Cardinals shifted to LED sport lightings. The growing number of cricket and football matches around the globe is the critical factor driving the growth of the indoor stadium lighting segment. The indoor stadium lighting segment is estimated to grow with a CAGR of xx% during the forecast period.

For the 2019 Rugby world cup held in Japan, the LED lighting system was used in the 30,132-seat stadium. It was commissioned by an innovative method using robotic measurement and also involved video aiming and laser scan. This created an extraordinary experience for the spectators during the match, which is the farthest competence of conventional lighting technology. Hence, more stadium countries and stadium owners are shifting to innovative stadium lighting techniques.

Cricket is one of the popular sports with a massive fan base around the globe. It is crucial to have excellent cricket field lighting for the visibility of the ball when it is moving at high speeds. The cricket stadium lighting is mainly divided into three levels, including non-televised training, non-televised match, and high-definition televised match. One of the most common lights used in a cricket stadium are LED lights as they emit white bright light. The LED lights provide complete coverage of the field without dark spots. Moreover, they are energy-saving and more durable than conventional lighting sources and hence it is widely utilized in cricket stadiums.

There is no specific standard for cricket field lighting, but a Community Cricket Facility guideline has been developed by Cricket Australia, which outlines a recommended lux level and uniformities to be followed. The aforementioned guideline is based on the International standards EN12193 that identifies three primary levels of lighting for non-televised cricket matches, and two levels for training/match practice.

The impact of COVID-19 has an unprecedented effect across all industry verticals globally. The global stadium lighting market has witnessed a slight decline in growth amid pandemic COVID-19 on account of stringent regulations from the governments such as; social distancing, shut down of international and domestic flights, cross-border activities among others. This leads to a temporary halt of all sports events, outdoor events, and concerts, among others, thereby declining the demand for the stadium lighting market. However, easing lockdown measures has lead to the start of sports events, indicating hope to improve the demand for the stadium lighting market.

The increased adoption of technological advancements among the populace in North America is the primary reason for the market growth. The far-flung expansion of the sports and athletic field construction industry in the U.S. is contributing to the North American market growth. The surging investments in new sports and athletic field construction in the region’s private and public markets also contribute to the market progression. It is estimated that approximately 244 stadiums are currently present in the U.S. Industry operators in the U.S build, alter, and renovate sports stadiums and arenas to augment the hospitality for the audiences. Largely, the demand in this region originates from educational institutions or commercial sports enterprises such as leagues and sports franchises. The lighting system attracts viewers, which compels owners to incorporate modern lighting methods in stadiums. In the U.S, the light-emitting diode segment holds the lion’s share of the market.

Notable Asia-Pacific countries such as India, Australia, Pakistan, and Bangladesh are home to many international and national cricket matches. China and Japan host the Olympic Games that attract world attention. Japan, the host for the 2019 Rugby World Cup and 2020 Olympics, is expected to be one of the key drivers in escalating regional market growth. For the 2020 Olympics, Japanese organizers allocated around USD 12600 million. Moreover, the matches for Rugby World Cup 2019 will be played at 12 different stadiums all over the country. These events are boosting the demand for stadium lights considering the expenditure on projects related to new stadium renovation and construction activities.

How much is the Stadium Lighting Market worth in the future?

The global stadium lighting market was valued at USD 8.05 billion in 2019, growing at a CAGR of 4.4% during the forecast period.

What is the key factor driving Stadium Lighting Market?

Increasing Adoption of IoT, Big Data, and analytics, implementation of green activities, and the increasing popularity of sports events, concerts, and outdoor events are the key factors expected to drive Stadium Lighting Market during the forecast period.

Which region is expected to hold the highest market share in the Stadium Lighting Market?

Who are the active players in Stadium Lighting Market?

What was the value of Global Stadium Lighting Market in 2019?

In 2019 Global Stadium Lighting Market was valued at USD 8.05 billion.

Which is the leading segment in the Stadium Lighting Market?

Cricket Sport Type Segment is expected to be the leading segment in Stadium Lighting Market during the forecast period.