Wireless car charging —a rapidly evolving advanced technology — is expected to be pivotal for the electric vehicle (EV) industry. It eliminates the need for plug-in cables and adaptors and reduced the long wait time otherwise spent at charging stations, making the process of charging electric vehicles far more convenient and enabling vehicles to travel longer distances.

Rising environmental concerns have seen an upward trend in the uptake of electric vehicles. Favorable government initiatives are further supporting this shift. For instance, Amsterdam’s government offers parking permits all over the city for electric vehicles. Other benefits such as exemption from taxation during vehicle registration and subsidies are also accelerating the adoption of electric vehicles, in turn providing impetus for changing technologies such as wireless car charging. 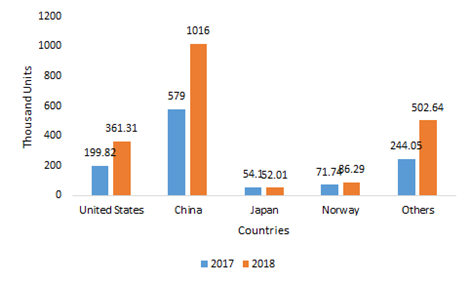 2017 was a significant year for the electric vehicles market, as the global sale of plug-in and battery electric vehicles surpassed 1 million units for the first time in history. Almost 20 cities around the world have declared plans to ban diesel and gasoline cars by the end of 2030. For instance, Paris aims to ban diesel and gasoline automobiles by the end of 2030. The rising adoption of electric vehicles will subsequently enhance the need for wireless charging infrastructure, augmenting the growth of the wireless car charging market.

Governments have realized that the adoption of EVs depends on the availability of advanced infrastructure. They are thus taking steps to develop adequate charging infrastructure to meet the existing and future needs of electric mobility. For instance, the Norwegian government is working with Fortum, a Finnish company, for the implementation of wireless car charging facilities for electric taxis in Oslo. The U.K. government has invested USD 2 million in Char.gy, an electric charging company, for the installation of wireless charging technologies in residential streets of the U.K.

Low fuel prices contribute to the dominance of combustion engines in the Middle East; however, the advent of EVs has affected the region as well. Public and private sector initiatives for reducing carbon emissions to match international trends are augmenting the regional EV market.

The UAE is a pioneer in the adoption of EVs, and the government is developing wireless car charging infrastructure as inconvenient and cumbersome charging options are hindering market growth in the country.

As per the U.K. Department of Transport, the U.K. government is investing USD 44 million for the enhancement of electric vehicle infrastructure coupled with wireless car charging methodologies. The Society of Motor Manufacturers and Traders reports that after the aforementioned government initiative, battery-electric car registration in the U.K. increased by 61.7% in June 2019, compared to sales in June 2018. Concurrently, a reduction in the sale of hybrid vehicles was also observed. 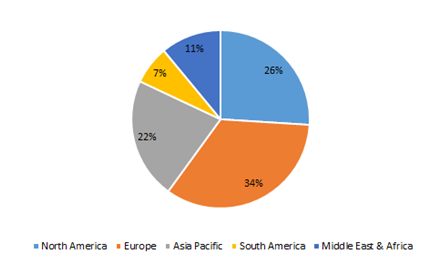 Europe is the largest value shareholder in the wireless charging market, which is attributable to the presence of advanced infrastructure facilities, coupled with favorable government initiatives supporting the development of wireless charging techniques.

The sale of EVs in China is increasing rapidly. ICE cars manufactured in China lack quality; thus, companies are adopting new technologies, which has accelerated the production and sales of EVs in the country.

The figure below indicates the sale of EVs in China for the period of 2015–2018. 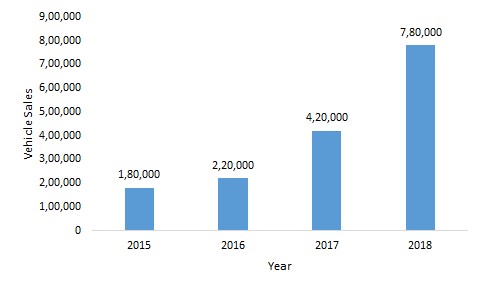 South America’s EV infrastructure is still in the nascent stage, and countries in the region have limited experience with EVs. Public charging is not prevalent in the region, and EV adoption is low. However, the region’s 650 million populace marks South America as a strategically critical region.

Manufacturers from North America, Asia, and Europe have started establishing facilities in the region. The regional car market size and growth is projected to bring forth more promising opportunities for the Latin American electric vehicle market and further for the inductive wireless charging systems market.

What is the key factor driving Wireless Car Charging Market?

Who are the active players in Wireless Car Charging Market?

Which region is expected to hold the highest market share in the Wireless Car Charging Market?

Which is the leading segment in the Wireless Car Charging Market?