The manufacturing sector is experiencing a golden era, primarily backed by the growth of interconnected and intelligent devices. Internet of Things (IoT) has shortened business processes and boosted productivity, providing better products and services. According to Huawei’s global industry vision predictions, by 2025, there would be around 40 billion smart devices worldwide with around 100 billion connections in public utilities, transportation, manufacturing, medical care, and agriculture.

On the flip side, new technologies and applications widen the scope for security threats as well. Although machine learning and artificial intelligence have added value in the industrial sector, they have also created severe security threats as they can be adopted for launching attacks on IoT devices. As IoT faces several threats such as device hack, network attacks such as DDoS, and others, security has become a primary concern, which is creating a need for effective multi-channel security solutions.

A survey conducted by DigiCert in 2018 stated that IoT security has led to security losses of around USD 34 million in the past two years. The below figure depicts the concerns among enterprises for IoT. 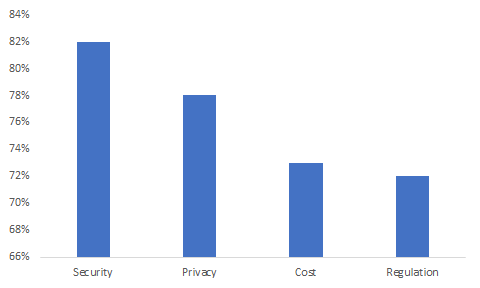 Asia-Pacific to Remain a Prominent Market for IoT Security, With Governments Focusing on Implementing IoT Solutions in the Industrial & Manufacturing Sector

The rapid growth of IoT in China, Japan, and South Korea presents growth opportunities for vendors offering IoT security solutions in the region. Hidden threats posed by IoT devices in terms of data sharing have led security experts and government agencies in Japan to undertake security measures. For instance, Japanese authorities announced their decision of testing password security in over 200 million IoT devices through routers and webcams. This initiative would directly impact the market growth in a positive manner by raising the need for effective security solutions.

In Singapore, government bodies have announced the Research, Innovation, and Enterprise (RIE) 2020 plan, which focuses on the expansion of IoT in the industrial and manufacturing sector. The government has also proposed a budget of USD 19 billion for this initiative until 2020. This has attracted various government institutions and major companies to widen the scope of advanced manufacturing technologies such as IIoT, cloud computing, and robotics.

Emerson has recently opened a Customer-Focused Solution Center in Singapore to implement industrial IoT solutions in the manufacturing sector for enhancing digital intelligence in the sector. In November 2016, Sumitomo Chemical started a global IoT project, with support from Singapore’s Economic Development Board (EDB), which it will implement in cooperation of Accenture. The company is focused on utilizing the latest technologies for digitalization of plant-related operations and visualization of global supply chain information.

The rapid proliferation of connected devices in various industrial sectors poses potential threats regarding device security. An Avast report published in February 2019 states that 40.8% of smart homes come with IoT devices that are vulnerable to remote attacks, with 33% of them being vulnerable due to outdated software. Trend Micro also states that outdated software on UPnP enabled devices increases the risk of attacks by several servers and daemons. In light of this scenario, companies are compelled to focus on the development of security solutions for IoT devices. For instance, in July 2019, Tata Communication and Thales entered into a partnership for the development of sim security solutions for IoT devices.

Stringent Regulatory Frameworks Mandating Worker Safety Measures in Industries Drive Growth of the Personal Protective Equipment Market
Personal protective equipment (PPE) refers to equipment such as goggles, helmets, or other products designed to protect the body from infection or injury. It is used to protect the user from hazard