Rising elderly population, growing prevelance of cardiovascular diseaes and increasing global burden on ecnomies are propelling the active implantable medical devices market. As per WHO, around 17.9 million people die every year from CVDs, which accounts for 31% of all deaths globally. In addition, increasing cases of neurological disorders such as Parkinson’s disease, epilepsy, and dystopia is observed to be high in emerging economies such as India. Neurostimulation is an effective treatment for these neurological diseases. As per Global Burden of Disease report, rate of cases per 100,000 people has increased in Parkinson's by 15.7 percent, Alzheimer's 2.4 percent, and brain and nervous system cancers 8.9 percent.

New products are being launched to meet the demand of consumers by market players. For instance, in 2016 , Medtronic launched  first leadless pacemaker Micra TPS. Introduction of wireless technology and mobile connectivity has enhanced the effectiveness of these devices. In the same year, Boston Scientific Corporation launched the Precision Montage MRI Spinal Cord Stimulator (SCS) System, which gives access to full body magnetic resonance imaging (MRI) in a 1.5 Tesla environment.For instance, in 2017, Cochlear collaborated with Apple to provide cochlear implants with iPhone connectivity. 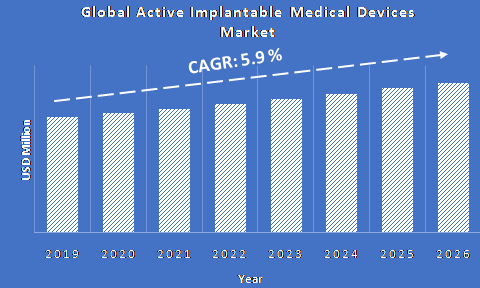 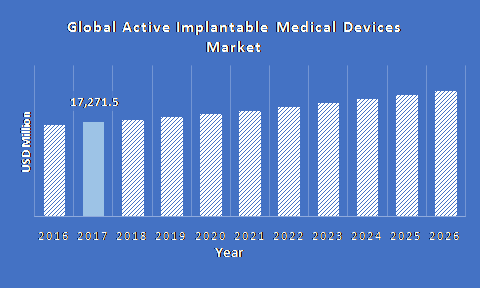 Based on end user, the market is segmented into hospitals, ambulatory surgery centers and specialty clinics. Rising investments and improving healthcare infrastructure is contributing in the hospital sector to emerge as the most prominent end user in the years to come.

North America is likely to dominate the active implantable medical devices market due to increasing geriatric population, rising prevalence of cardiovascular and neurological diseases, accessibility to advanced technologies, and increasing healthcare expenditure in the region. As per Disease Control and Prevention (CDC), 2017, around 2.7 to 6.1 million people in were suffering from atrial fibrillation, the most common type of heart arrhythmia in the U.S. 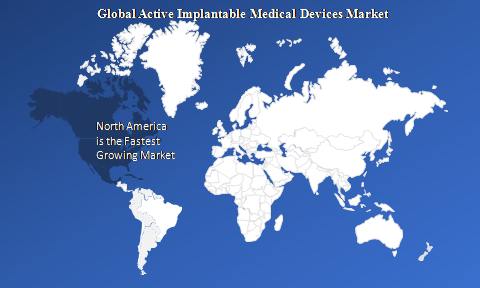 Europe is likely to emerge as the second largest active implantable medical devices market globally. This can be attributed to increasing incidences of chronic disease and reimbursement policy for implantation of pacemakers to reduce the financial burden. According to world’s export data, in 2017, European countries exported highest number of heart pacemakers during with the worth around USD 5 billion or 91.3% of the global total.

Asia pacific active implantable medical devices market is expected to witness significant growth on account of high prevalance of chronic diseases, aging population, healthcare reforms for infrastructural development, growing and less stringent regulations for new product development. As per the study conducted by The Global Burden of Disease, CVD death rate was 272 per 1,00000 individuals in India higher than the global average of 235.

LAMEA is expected to witness steady growth. Latin America is most affected by heart disease and it has put an economic burden of around USD 30.9 billion in 2015 and approximately 89.6 million people are diagnosed with the condition in the region.