Aerogel is a mesoporous solid foam composed of an interrelated network of nanostructures with no less than 50% permeability. It has low thermal conductivity, which makes it an ideal material for insulation. It is eco-friendly, as aerogel sponge can be recycled post use. These features make aerogels applicable in many industries, such as aerospace, oil & gas, healthcare, building insulation, electronics, and others. The primary factors driving the market are innovations in the manufacturing process, enhanced thermal insulation capacity, and easy and abundant availability of raw materials. However, poor mechanical strength and high production cost are some of the determinants hampering market growth.

On the basis of type, the market is segmented into silica, polymer, carbon, and others. Silica aerogels are expected to gain traction in the global aerogel market during the forecast period (2019–2026), owing to their increasing use in the aerospace industry. They have a lower density, high thermal conductivity, refractive index, and dielectric constant. On the basis of foam, the market is segmented into blanket, panel, particle, and monolith. Aerogel blankets find significant applications in the construction industry. They can be used as thermal insulation in buildings and industrial and apparel sectors, as they are is highly-breathable, flexible, bendable, water repellent, and wrappable. They also exhibit low dusting and low-powdering properties.

Aerogel to Play a Vital Role in the Aerospace Industry

On the basis of application, the market is segmented into oil and gas, construction, performance coating, transportation, daylighting LVHS, and others. The transportation segment is further sub-segmented into automotive, aerospace, and marine. The aerogel market is gaining traction in the aerospace industry. For instance, according to an article published by Hindawi Publishing Corporation, aerogel was used in numerous aeronautical missions conducted by NASA, owing to its lightweight, good thermal insulation, and other favorable properties. Aviation, military, and defense industries are demanding high-performance thermal insulation materials such as aerogels. 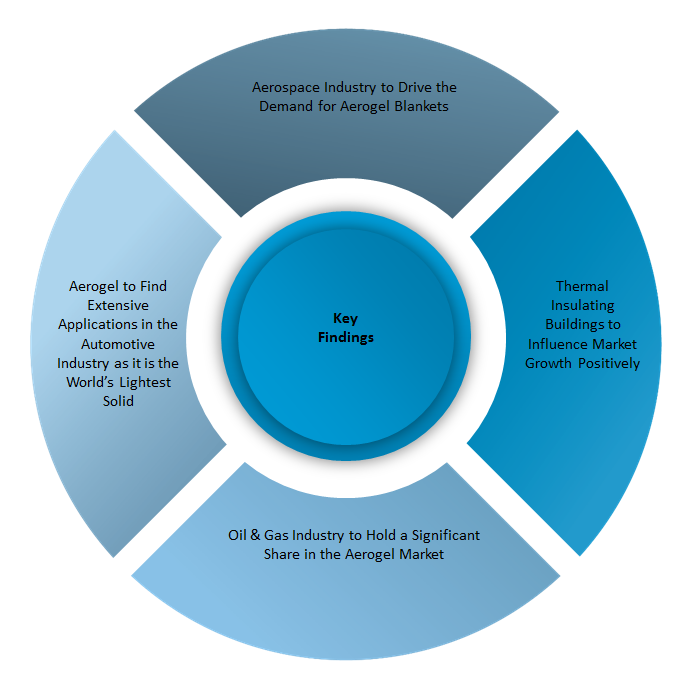 North America to Dominate the Global Market, with Impetus from R&D Activities in the Region

North America is expected to dominate the global aerogel market during the forecast period (2019–2026), with aerogel beings used extensively in the region’s marine, automotive, and aerospace sectors. The U.S. is the largest shale producer in the region; hence, the use of aerogel in shale gas pipelines significantly contributes to market growth. This makes the U.S. a primary consumer of aerogel materials worldwide. NASA has effectively used aerogel to capture hypervelocity particles and as a thermal insulator in its space missions. Stringent government regulations by the U.S. government pertaining to the development of energy-efficient insulated buildings and awareness regarding eco-friendly products are some other factors driving the market in the region. Besides, in-depth research in process and product development is positively impacting the market. The United States Department of Energy (DOE) is focusing on advanced insulation materials, which help thrift consumption of energy and money for industrial sectors.

Asia-Pacific holds a significant share in the aerogel market, owing to the region’s expanding automobile and construction sectors. Developing countries such as China and India are broadly using aerogel as a thermal insulator for safer and effective construction of buildings. Moreover, rapid industrial development in the region has encouraged the use of silica aerogel in various sectors such as automotive, oil and gas, construction, and others. Population growth in India and China is bolstering the silica aerogel market by providing impetus to the growing consumption of oil and gas. In September 2017, Svenska Aerogel AB signed a cooperative agreement with Chemtech Specialty India Pvt Ltd (India), wherein Chemtech will develop products based on Svenska Aerogel AB’s material Quartzene with India’s largest paints and coatings manufacturers. Through this agreement, Svenska aimed to gain a firm foothold in the Indian market.

Europe is projected to be the second-largest contributor to the global aerogel market. Industrial establishment, expansion of the construction sector, and renovation of old buildings are some of the primary factors boosting market growth. The European government’s initiative ‘Nearly Zero-Energy Buildings,’ can be achieved using silica aerogel as an insulation material for buildings, owing to its superior thermal insulation property. In 2018, Svenska Aerogel, one of the key players in Europe launched a new material ‘Quartzene,’ which helps in increasing energy efficiency by 90% and is less expensive.

LAMEA is an emerging region in the global aerogel market. In Africa, aerogel is widely used in various industries such as automobile production, construction, and oil and gas, among others. Venezuela has the world’s largest oil reserves, which thrives the aerogel market in the region. The housing sector uses aerogel as an insulator, utilizing the materials’ potential. The Middle East, a dominating oil exporter worldwide, is extensively using aerogel in pipelines, as aerogel blankets prevent pipeline compression resistance and reduce the amount of steel required in pipeline construction. 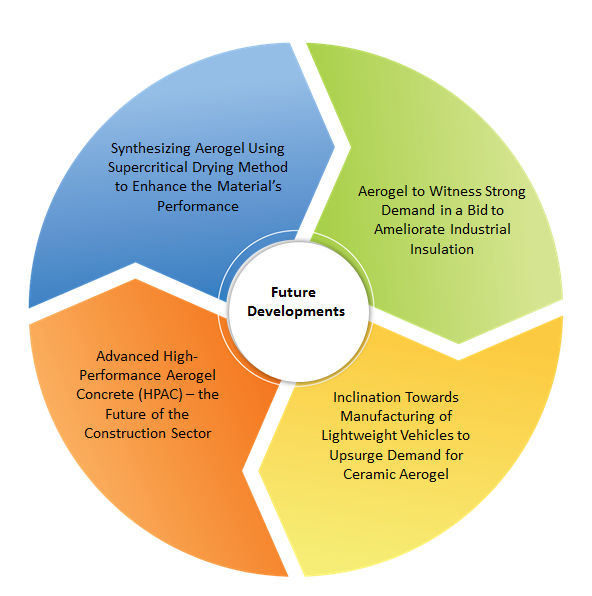 Which Details are Covered in the Aerogel Market Report? 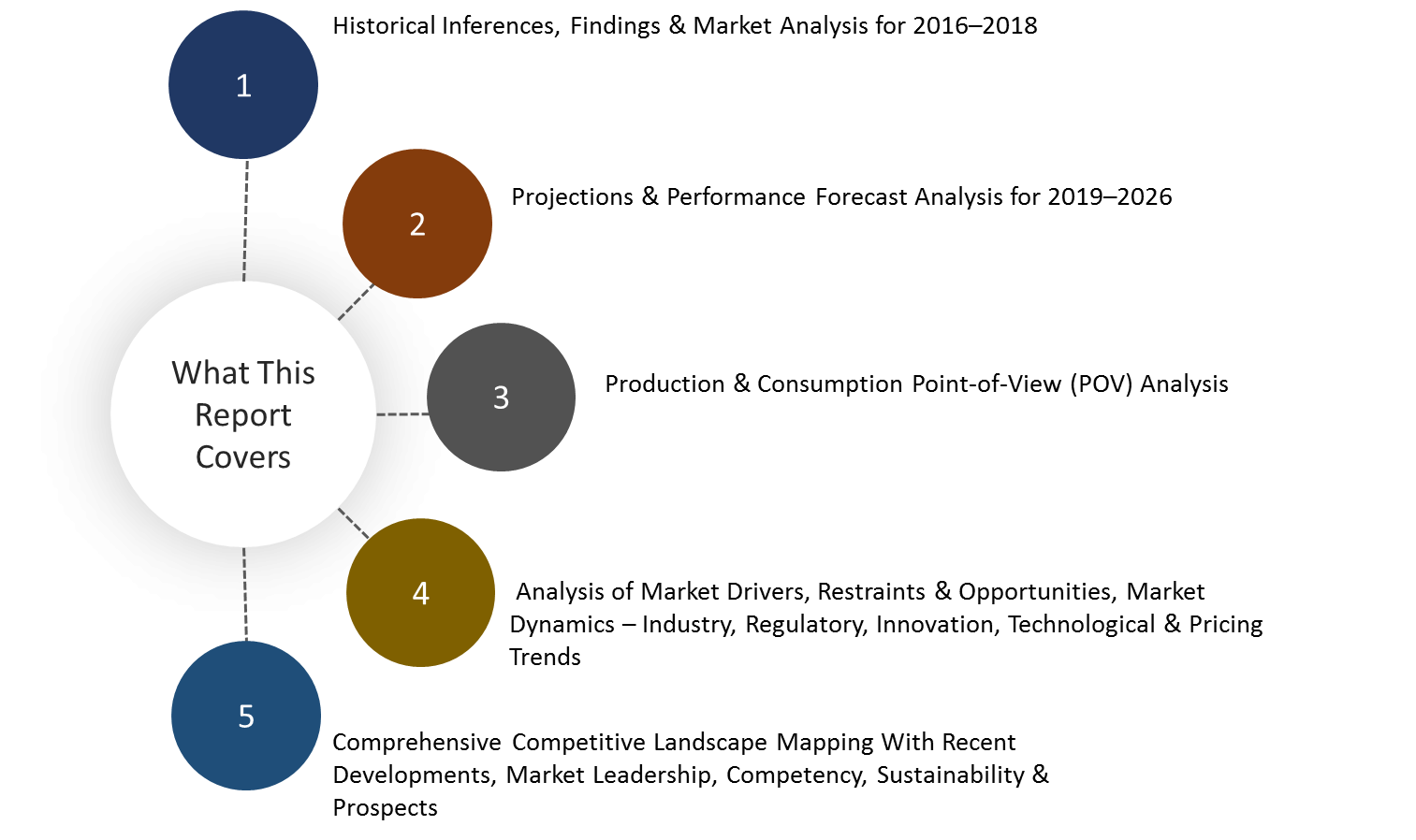