Alcoholic beverages are prepared by adding ethanol to the beverages. It is available in the varied alcohol concentration of 3%–50% and is consumed socially or daily. Consuming alcohol socially in low dose reduces anxiety and causes euphoria with improvement in sociability. Consumption of higher doses of alcohol unconsciousness, drunkenness, stupor, or death in some cases. Prolonged consumption of alcohol in high doses cause alcohol abuse, alcoholism, physical dependence, and cancer. Alcoholic beverages is the most widely used recreational drug across the globe with more than 33% current drinkers.

According to the Population Reference Bureau, global youth population is expected to increase and reach 1.4 billion by 2050. Furthermore, same bureau states that countries with largest percentage of youth demographics are Ethiopia, Swaziland, Lesotho, Yemen, Afghanistan, Timor-Leste, and Guatemala. 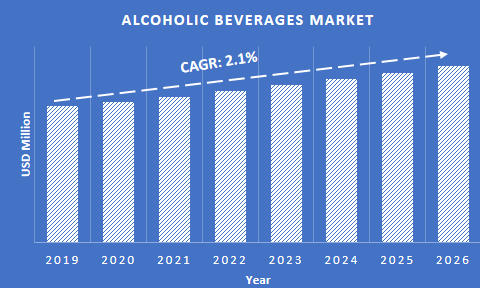 The global alcoholic beverages market is segmented on the basis of type, distribution channel, and region.

Based on type, the global alcoholic beverages market is segmented into distilled spirits, beer, wine, champagne and others. Distilled spirits is further segmented into whiskey, rum, vodka, and others. Beer is segregated into lager, ale, and hybrid. Wine is further divided into sparkling and fortified. Beer segment accounts for largest share of the market owing to the increasing popularity of beer across the globe. According to the Brewers of Europe, in 2016, 415,517 hectoliter of beer was produced in Europe with 1.3% growth from 2014 and 1.0% growth from 2015. Moreover, distilled spirits segment is expected to account for significant share of the global alcoholic beverages market followed by wine segment. In 2016, wine segment experienced growth of 0.5% as compared to 2015 and is expected to grow significantly during the forecast period 2019–2026. 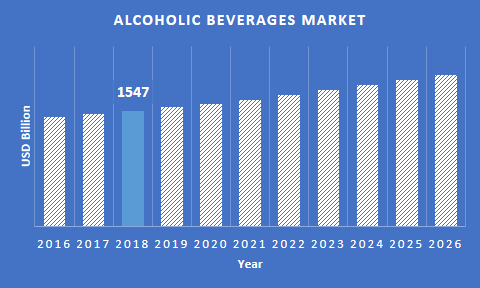 Europe accounts for largest share of the global alcoholic beverages market. It is expected to grow significantly with optimum CAGR owing to the heavy demand of alcoholic beverages in the region and presence of major players in the region. According to the Eurostat, more than 30% people of the age of 15 years and over consumes alcohol every week in Europe. Additionally, demand for alcohol consumption is higher in the U.K with 45% people drinking every week as compared to 41% in Ireland & Luxembourg and 40% in Germany & Denmark.

North America largely makes up a substantial share of the market. Increase in the demand for beer and leaning trend towards alcohol consumption are some of the factors driving the global alcoholic beverages market. According to the BREWERS ASSOCIATION, sales of craft beer, import beer, and export craft beer has grown by 5.0%, 3.2%, and 3.6% in 2017. Generational shifts of changing tastes is the other factor escalating the market growth. Whiskey segment experienced growth of 3.2% in 2017. 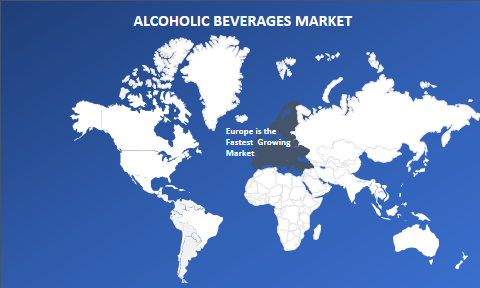 The Coca-Cola Company is planning to launch its first alcoholic drink in the Asia Pacific market due to the significant growth of the region. The company is going to introduce the new alcoholic beverage with 3% and 8% alcohol content by volume.

New entrants offering new products and giants in the beverage industry entering the alcoholic beverage market is expected to affect the market growth in the near future.

Our report covers the alcoholic beverages market insights, focusing on recent developments in the market in different regions and development strategies of the companies. Moreover, following sections are specifically covered in the report.