However, stringent safety requirements for batteries during operation may hinder the growth of the market to some extent. In addition to this, inadequate charging infrastructure for electric vehicles across the globe is acting as a major challenging factor to the electric vehicle market growth, which in turn, is creating a challenge for the growth of the global battery materials market.

Automotive Industry to Augment the Demand for Battery Materials

As per the International Energy Agency, the value of government incentives for the purchase of electric vehicles rose by 72% in the year 2018. Because of the rise in government support, worldwide spending on electric vehicle (EV) purchases grew more than 70% in 2018 to 82 USD billion, therefore increasing the demand for battery materials. Furthermore, the rising production and exports of automobiles in various countries are projected to create a surge in battery materials due to the use of the battery. The below figure shows the export data of India over the years, which shows the growth in demand for the automotive sector: 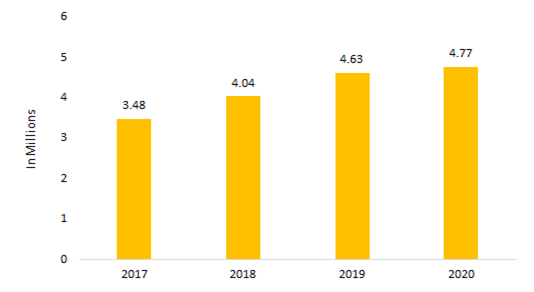 As per the above figure, the exports of automobiles in India saw an increase from 2017 to 2020 by 1.29 million, which is further expected to grow in the coming years leading to an increased demand for battery materials.

Rising Demand from End-Use Industries to Boost the Market Growth

The growing demand for batteries from end-users, such as the electronics industry is driving the growth of the battery materials market. In addition to this, an increase in disposable income coupled with a high standard of living is escalating the use of portable and electrical gadgets which majorly use lithium-ion batteries for uninterrupted power supply.

As per the U.S. Census Bureau, total revenue of 1,826,598 USD was generated by the U.S. in 2019 by exporting computers and their accessories only to China. Thus, the requirement to store the electrical power fuels is leading to the demand for batteries in invertors and generators, which is substantially augmenting the growth of the battery materials market. Furthermore, the growing technology-friendly population and rising consumer awareness towards wearable smart devices, is further increasing the adoption of portable batteries, which is expected to push the battery materials market growth higher.

Harmful Effects of Batteries to Restrict the Market Growth

The harmful effects of batteries on human health due to their toxic properties are expected to act as a restraint for the growth of the global battery materials market. As per the U.S. federal regulations, Li-ion batteries are categorized as hazardous due to their lead (Pb) content. It is found that exposure to high levels of lead may cause weakness, anemia, and kidney or brain damage. The Institute for Health Metrics and Evaluation (IHME) estimated that lead exposure accounted for 1.06 million deaths in 2017. Additionally, various restrictions and regulations have been set up with regards to packaging, marking, labeling, and transporting of batteries, which is anticipated to restrict the market growth.

Based on geography, the Battery Materials market is categorized into North America, Europe, Asia-Pacific, Central and South America and the Caribbean, the Middle East, and Africa. Asia-Pacific is expected to hold the largest market share in the global battery materials market during the forecast period. The growth can be attributed to the growing demand from the regional automotive industry due to the increase in the use of electrical vehicles in the region.

The rapid industrialization and urbanization in developing countries have led to an increased demand for automobiles. In addition to this, the growing population and a shift in the focus of manufacturers to manufacture in this region because of the availability of cheap labor and low-cost manufacturing facilities, has led to a significant presence of leading automobile manufacturers which is helping in the large production, sales, and export of automobiles in the region and has accelerated the demand for batteries and battery materials.

Some of the major automobile-producing countries in the Asia-Pacific are China, Japan, India, and South Korea with China leading in the growth of the automotive industry. According to the International Energy Agency (IEA), 7.2 million electric cars were seen on the roads in 2019 as compared to 17,000 electric cars in 2010. 47% of these cars were seen in China, allowing the country to lead the electric vehicles market and increase the demand for batteries thus, augmenting the growth of battery materials.

In addition to this, the use of batteries in the electronics sector and industrial sectors powered by usage in telecom, railways, and other industrial applications are also driving the battery materials market in the Asia-Pacific.

Europe is anticipated to hold the second-largest market share in the global battery materials market. European countries such as Germany, France, Italy, and Spain have been home to some of the top automotive brands in the world. Thus, the region is expected to witness a high growth potential over the forecast period.  The growth of commercial vehicles in this region has boosted the demand for batteries and therefore, is driving the battery materials market.

As per the European Automobile Manufacturers Association, the commercial vehicle registrations across the European Union saw an increase of 5.7% in December 2019. In addition to this, the increasing production of passenger cars along with an increase in exports is also augmenting the demand for battery materials in this region.

In 2019, the European Union exported around 5 million passenger cars with a value of 139.3 USD billion. Furthermore, the growing demand for electric and hybrid vehicles is also positively impacting the growth of battery materials in the region. As per the International Council on Clean Transportation, hybrid electric vehicles (HEV) in the EU were 3 % of all new car sales in 2018 which is projected to grow further.

The global battery materials market comprises a significant number of players. The key players of the market are focusing on adopting strategies such as strategic partnership, collaboration, joint ventures, etc. to increase their market share and sustain in the market.

For instance, Mitsubishi Chemical Corporation and Ube Industries, Ltd. announced a tie-up for joint operations of their lithium-ion battery electrolyte businesses in China in January 2018, which will further enhance their technologies and strengthen cost competitiveness in the market.

Which is the leading segment in the Battery Materials Market?

Automotive Application Segment is expected to be the leading segment in Battery Materials Market during the forecast period.

Who are the active players in Battery Materials Market?

Which region is expected to hold the highest market share in the Battery Materials Market?

What is the key factor driving Battery Materials Market?

Growing demand for batteries in automobiles, increasing the demand for electric and hybrid vehicles, rising production and exports of automobiles in various countries are the key factors expected to drive Battery Materials Market during the forecast period.