The global biogas plant market size was valued at USD 62.05 billion, expected to expand to USD 91.8 billion at a CAGR of 4.45% during the forecast period. Biogas is an environmentally friendly and sustainable source of energy. Biogas is the gas produced through bio digestion. The gas produced by bio digestion is non-polluting; in fact, it reduces greenhouse gas emissions. There is no combustion in the process, so there is no emission of greenhouse gases; therefore, using gas from waste as an energy source is an excellent way to combat global warming. Biogas consists primarily of methane and carbon dioxide, with trace amounts of water and other gases. In the absence of oxygen, the decomposition of organic matter produces biogas. Techniques like anaerobic digestion and landfilling are utilized to produce biogas, most of which are composed of methane and carbon dioxide.

Biogas offers several advantages not shared by other fossil fuels in various applications, such as residential stoves, combined heat, power plants (CHP), transportation, and commercial uses like greenhouses. Due to its low carbon footprint, biogas helps moderate the rate at which the planet's average temperature is climbing. The biogas plant market share is anticipated to expand due to the rising demand for products in various applications, including electricity, heat, vehicle fuel, upgraded biogas, and cooking gas. The shift in emphasis toward using renewable energy, especially in the electric power sector, has substantially increased the consumption of biogas in electricity applications. Moreover, the growing need to reduce reliance on fossil fuels creates growth offers for biogas in vehicle fuel applications.

In addition to developing their agricultural sectors, several nations are adopting policies that make biofuels mandatory and have established targets for the number of biofuels they intend to produce shortly. It is important to note that mandates and incentives for blending biogas and biomethane with fossil fuels are significant contributors to the continuous growth in the production and utilization of this fuel. For instance, in the year 2019, the policy of the European Green Deal was put into effect. The policy's goal was to decrease the percentage of greenhouse gas emissions that could be done by biofuels. The target of a 55% decrease by 2030 was established to modify existing directives throughout the European member states as they adjusted mandates to accomplish these goals. Various biofuels, such as biodiesel, ethanol, biogas, and biomethane, are utilized in the transportation industry.

Because biomethane is becoming significantly more reliable and cost-effective in various regions, it can potentially replace natural gas in the future entirely. This possibility arises due to the growing percentage of biomethane blended with fossil fuels. In addition, encouraging policies enacted by the government have also been a primary factor behind the growth of the biogas plant industry. Several national governments have initiated policy-level initiatives to advance the biogas industry. In the United States, specific municipal solid waste landfills are required by regulations enacted under the Clean Air Act to install and maintain a system for collecting and controlling landfill gas emissions. Therefore, in 2019, approximately 257 billion cubic feet of landfill gas were collected at 336 landfills in the United States and burned to generate around 10.5 billion kilowatt-hours (kWh) of electricity, which is equivalent to approximately 0.3% of the total amount of utility-scale electricity generation in the United States in 2019.

China has also increased its support for the technology by providing incentives covering 25%-45% of the total cost of biogas projects, allocating more funding to China's central and western regions, and focusing more on innovative project development. Policies analogous to feed-in tariffs have been established to encourage plant power generation. Additionally, local service systems were installed to improve the effectiveness of biogas production and utilization.

Alternate forms of electricity generation, most notably solar and wind power, pose a threat to the industry of bioenergy, which is primarily responsible for biogas production. It is anticipated that the growing adoption of cleaner modes of energy production, such as power generation from solar and wind resources, will reduce the demand for bioenergy. Policies favorable to the development of solar and wind power infrastructures have been enacted by several governments worldwide. The utility sector traditionally favored wind power over solar power. Wind turbines do not require sunlight to function; the primary advantage is wind energy rather than solar. Therefore, wind turbines are capable of producing electricity around the clock. Additionally, the growth of the wind power market worldwide receives a significant boost from the rising investments in wind power projects.

The transition from fossil fuels to greener fuels creates lucrative growth opportunities for the biogas market. In recent years, biogas technology in various regions has remained unchanged. However, new technological innovations that make biogas more efficient and environmentally friendly have emerged in the biogas plant market. This is likely to increase biogas plant market opportunities. In recent years, innovations such as Home Biogas have provided food businesses with an innovative, cost-effective biogas system that can convert up to 250 kilograms per day of organic waste into clean energy with a payback period of only 36 months. Bio Bang is another innovation that has attracted the attention of many biogas industry participants. Bio Bang is a patented controlled cavitation technology that ensures the rapid digestion of biomass in biogas and biomethane plants for agricultural, industrial, and OFMSW applications, thereby increasing production. In addition to innovations, the biogas plant market growth also benefits from favorable government policies.

The global biogas plant market is based on source, application, and region.

Based on source, the market is divided into Municipal, Industrial, and Agricultural.

The municipal segment is expected to grow at a CAGR of 5% and reach USD 37,977 million during the forecast period. The municipal segment involves the collection of waste used for biogas generation. The waste is collected and processed by or for the municipalities. It consists of household waste, including bulky waste, from commerce and trade, office buildings, institutions, and small businesses, yard and garden waste, street sweepings, litter container contents, and market cleansing waste. Biogas is utilized in residential, commercial, and industrial settings and in power generation, heat generation, and cogeneration, among other applications. The increasing use of municipal solid waste (MSW) in biogas production to reduce landfills and greenhouse gas (GHG) emissions is anticipated to drive global biogas plant market demand over the forecast period.

Similarly, it is anticipated that the industrial sector will experience significant growth throughout the forecast period. The rising interest in discovering efficient methods to obtain bio-products and biofuel from industrial food waste, in conjunction with an increasing need for wastewater treatment in the industrial sector, is anticipated to fuel the demand for biogas throughout the forecast period.

Vehicle fuel will have the largest share with USD 26,587 million and at a CAGR of 5% in 2030. The increasing emphasis on using sustainable and renewable fuel, especially in the automotive industry, has resulted in a significant increase in biogas as vehicle fuel. There is a growing interest in the use of biogas as a transportation fuel. Increasing regulations and taxes on waste disposal, the need for renewable fuel sources, efforts to improve local air quality, and the need for clean transportation fuels in urban areas are some factors contributing to this trend. Increasing consumer preference for biogas fuels due to their cost-cutting, high vehicle performance, and sustainability benefits also drive the biogas plant market growth.

Upgraded biogas application is also expected to grow significantly over the forecast period due to the incrementing demand for biofuel in various end-use industries, including the automotive market. Upgrade biogas is produced by converting biogas into biomethane, which involves removing contaminants, water, and hydrogen sulfide from the biogas before the conversion.

Asia-Pacific and Europe will Dominate the Regional Market 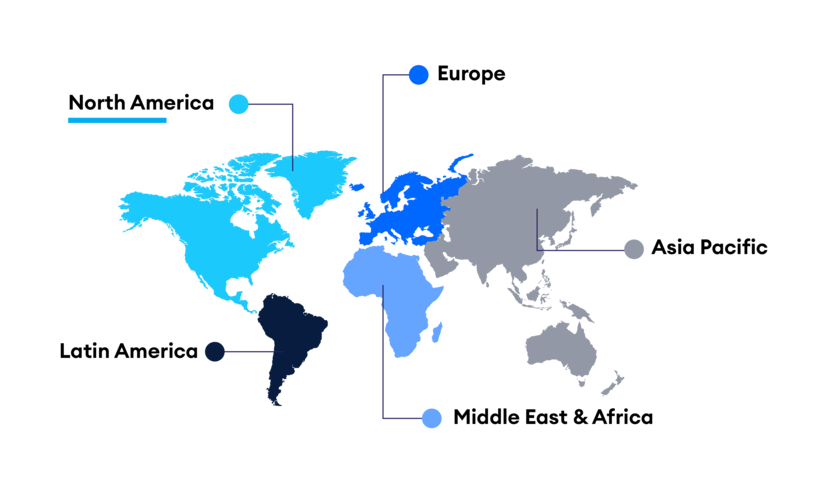 The Asia-Pacific region is expected to hold a share of USD 36,831 million at a CAGR of 6% during the forecast period. An increase in market demand for biogas and a rise in public and private sector investments in the research and development of biogas technologies are the primary contributors to the Asia-Pacific region's rapid expansion. Over two billion tons of solid waste are produced each year, with Asia-Pacific and Southeast Asian nations producing approximately 40% of the world's total solid waste. As a result, the region can produce biogas and address waste management and climate change-related issues.

The growth of the biogas plant market in the Asia-Pacific region is also aided by factors such as the high demand for energy and stringent environmental regulations. China's public and private sectors are investing more in biogas production, which drives the market's expansion. Principal contributors to the market's rapid expansion are the expanding biotechnology industries and the expanding government initiatives about energy security and energy independence.

The European region will command a share of USD 32,763 million at a CAGR of 3%. In the European region, the expansion is attributed to technological advancements and increasing investments in the refinery industry in that region. Several businesses all over Europe are planning to increase their share of feedstock over the next few years to meet the rising demand for biogas in the region. These developments will fuel the demand for biogas in the area. For example, the efforts of the Italian government to move toward decarbonization are driving the market there. Additionally, in March 2021, Eni SpA reached an agreement to purchase an Italian biogas company from FRI-EL Greenpower, a holding owned by the Gostner family. The transaction was to take place through Eni's circular economy subsidiary, Eco fuel.

North America will also have a significant share in the market during the forecast period, advancing at a prominent growth rate. The United States will contribute majorly to the region’s growth. The government of the United States has proposed several regulations to reduce the country's reliance on traditional fuels and advance toward the objective of producing no carbon emissions. The favorable regulatory and political support, environmental support, customer support, geopolitical support, and agricultural and economic support are significant factors influencing the country's growth in the biogas plant market.

The US is the primary impetus behind North America's biogas market growth. It is anticipated that the expanding demand for the product in various applications, including cooking gas, electricity, vehicle fuel, heat, and others, will positively impact the industry's growth throughout the forecast period. The primary factors driving the biogas plant market's share expansion are the high demand for environmentally friendly fuels, strict environmental norms, and increased investment in the development of refineries.