Business jets are used by several corporations, individuals, and leasing firms to increase business productivity by transporting employees, suppliers, customers, and other assets to locations that are not easily accessible through commercial airlines. They come in different sizes, namely light, medium, and heavy, each serving different applications depending on the load of the assets to be transferred.

Environmental concerns in light of severe climatic changes and rising global temperatures have prompted a shift to the use of energy-efficient and environment-friendly alternatives across all verticals, and the aviation industry is no exception here. The aviation sector is gradually shifting from conventional fossil fuels to new and environment-friendly technologies such as hybrid-electric aircraft propulsion, which enhances operating efficiency and lowers carbon emissions.

Businesses and sectors are implementing a customer-centric approach to sustain competition in today’s aggressive markets. In line with this, companies offer products that best fit consumer interests. For instance, Paramount Business Jet (PBJ), a business jet service provider, offers empty-leg flights to its air travelers as part of its customer-centric approach. An empty-leg flight refers to an airplane that carries no passengers or cargo and is impromptu charter. These flights are best suited for passengers who do not mind rearranging their schedules to meet the flight’s departure times and locations.

Light, mid-sized, and large are the three types of business jets available in the market, and they are classified on the basis of capabilities in range, speed, and cabin comfort. North America and Europe continue to be the traditional and significant markets for business jets. The high purchasing power in these regions augments market value. Large business jets account for a sizable share of the pie in these markets. The figure below depicts the share of each type in the business jet market for the year 2018. 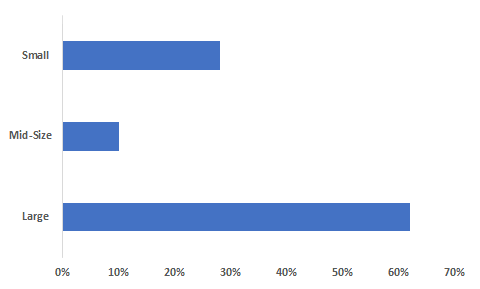 As per our findings, light jets are expected to record significant growth during the forecast period due to the shift in consumer behavior from conventional air traveling to business jet traveling on account of growing business avenues in Asia-Pacific and South America. The figure below depicts the estimated growth of the light business jet segment when compared with its counterparts for the duration of 2016–2025. 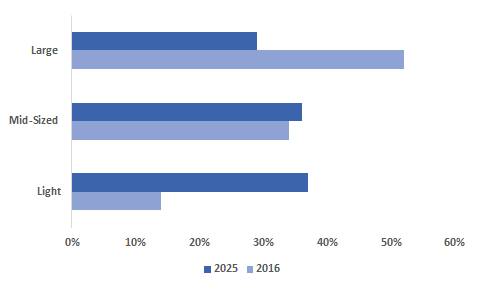 Geographically, North America and Europe are the regions of longstanding significance with relatively large value shares. Asia-Pacific is pegged to be an emerging region in the global business jets market, with strong growth prospects during the forecast period. 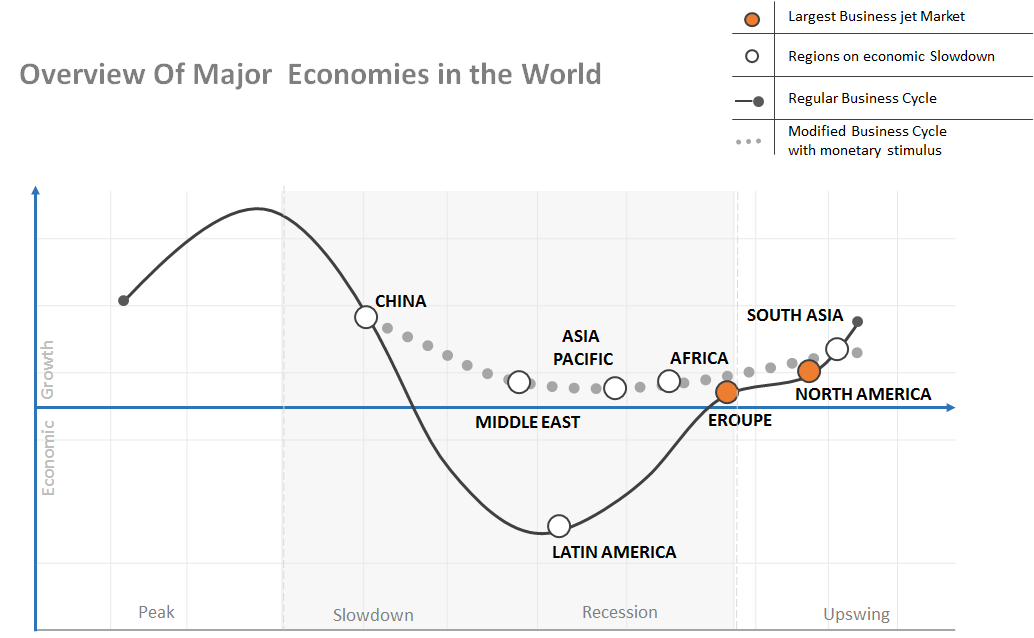 North America: Existing infrastructure in countries such as the U.S., Canada, and Mexico primarily contributes to the region’s large value share. The U.S. aviation sector has a strong network of approx. 3,345 airports with 3,331 existing and 14 proposed under the National Plan of Integrated Airport Systems (NPIAS). Of these, about 514 airports offer commercial services. The aviation infrastructure in Canada is also growing on account of investments in new airport development for the expansion of geographical networks. For instance, since the late ’90s, Transport Canada has approved approx. 67 remote northern airports, which represented funding of about USD 140 million. Further, between 2014 and 2017, the authority approved ten remote northern airports with a funding of about USD 15 million. Such developments and growth in aviation infrastructure create potential growth opportunities for the business jet market.

Europe: North America, specifically the U.S., is home to several traditional aircraft brokers. Many American flight departments choose to certify their jets on a Part 135 certificate for supplemental revenue over a European certification on account of the unconsolidated nature of the European charter market. This has resulted in the opening of untapped opportunities for new entrants in the market, particularly brokers leveraging online sales platforms. Countries such as Germany and France are significantly growing in the business charter market, according to the European Business Aviation Association (EBAA). In 2016, France was ranked as the leading business charter market in Europe, with an activity rate of approx. 7.2%.

Asia-Pacific: The region is a prominent emerging region in the business jet market, where China and India play a vital role in creating opportunities for market growth. China is a significant emerging market for business jets on account of the increasing jet manufacturing activities in eth country. Business jet fleet manufacturing increased at a CAGR of approx. 42% between 2010 and 2015. Additionally, customer behavior in China is shifting from large cabin aircraft to smaller business jets on account of the increasing awareness of how small business jets serve the purpose for short domestic routes over traditional aircraft.

South America: The region is working towards developing runways, terminals, and maintenance facilities, among other infrastructure, which is fostering the growth of the regional business jet market. In South America, Brazil accounts for a larger share compared to other countries such as Colombia. Several business jet manufacturers are concentrating their assets to grow in this region. For instance, in 2016, Embraer S.A. delivered about 690 new jets in South America.

The Middle-East & Africa: The significant shift towards business jets from conventional means on account of growth in high net-worth individuals, specifically in Saudi Arabia and the United Arab Emirates (UAE), drives the market growth in the Middle East and Africa. Additionally, the growing tourism sector is also significantly contributing to the growth of the regional market.

The business jet market has several small firms, primarily OEMs. Currently, there are about six OEMs operating at a global level, namely Bombardier Inc., Dassault Aviation, Embraer SA, Gulfstream Aerospace Corporation, and Textron Aviation. This depicts that the number of OEMs over the years has been low, even though several new firms are poised to enter the market. Thus, to sustain such a competitive market, these OEMs have to make strategic choices that emphasize market structure, pricing, production, and the most important investment decisions. Strategic decisions taken with cognizance of these factors will help OEMs position themselves in various market segments by offering differentiated product lines and associated services.

What is the key factor driving Business Jet Market?

Which region is expected to hold the highest market share in the Business Jet Market?

Which is the leading segment in the Business Jet Market?

Light Jets Segment is expected to be the leading segment in Business Jet Market during the forecast period.

Who are the active players in Business Jet Market?