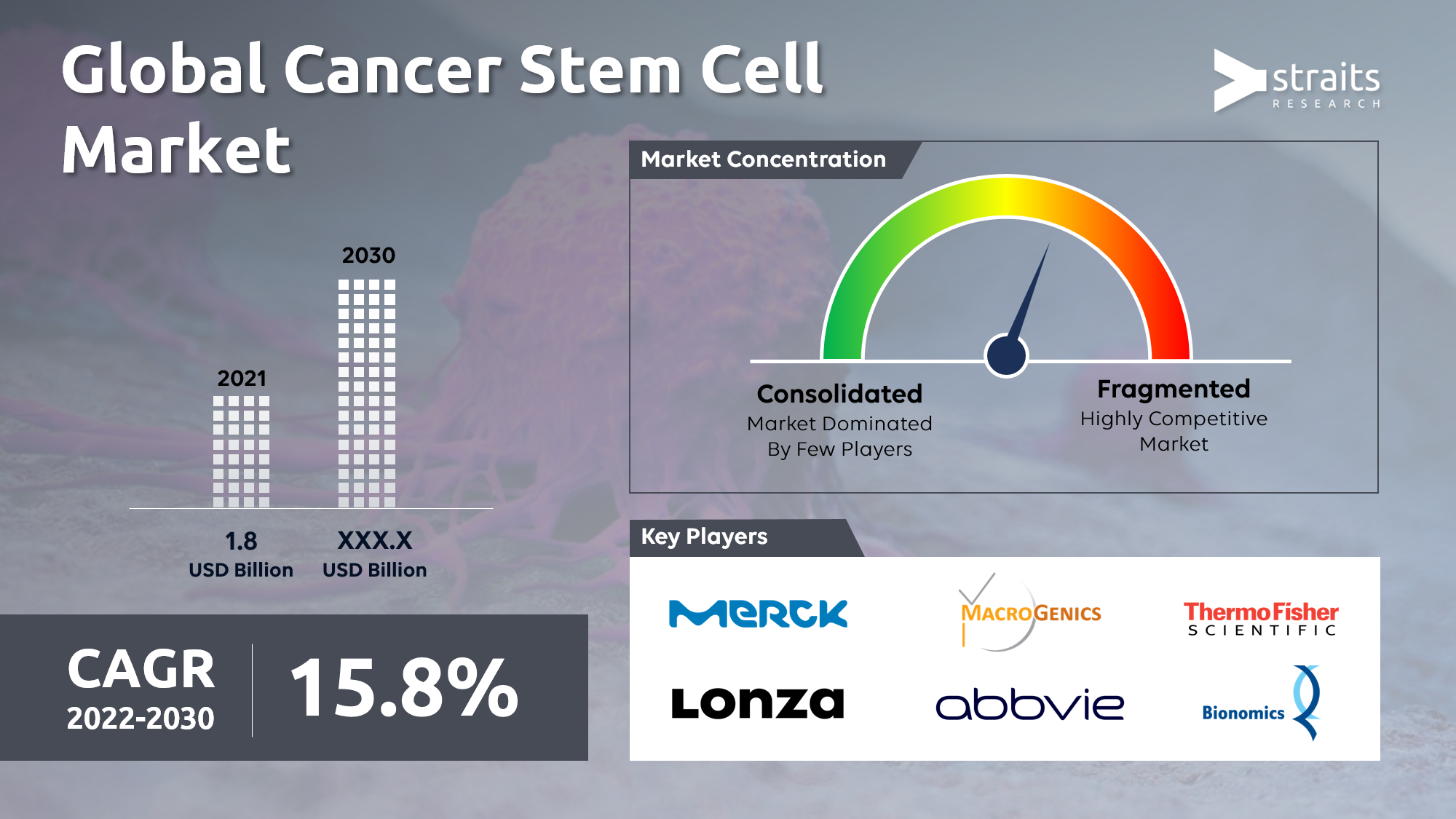 Cancer stem cells are a tiny, resilient fraction of tumour cells that resemble normal stem cells in the human body, hence their name. They are capable of continual reinvention and differentiation. In recent years, it has been increasingly apparent that they contribute to the genesis and progression of tumours, as well as their recurrence and metastasis. These stem cells, also known as tumor-initiating cells, are exceedingly resistant and frequently survive chemotherapy and radiation therapy unharmed. After a specific period of time, cancer stem cells can revive. They subsequently cause new aggressive metastases that are difficult to treat and eventually lethal.

Stem cell therapy's expanding use in cell transplantation and the treatment of malignancies such as leukaemia, lymphoma, multiple myeloma, and neuroblastoma is driving market expansion.

According to the International Agency for Research on Cancer (IARC), approximately 19,2 million new malignancies will be diagnosed worldwide in 2020, with around 10 million people dying from cancer.

A rise in the incidence and death rate of cancer worldwide, as well as increased R&D activities connected to the development of these medicines, are important factors fuelling market expansion. The rising global incidence of cancer has heightened the demand for a safe and effective treatment that will eradicate all cancer cells in the body while decreasing the patient's risk of relapse or metastasis. As a result, both cancer research and funding for treatment technology innovation are increasing. As R&D activities rise, researchers will gain a better knowledge of CSCs and how these cells might be used as targets to improve the efficacy of conventional cancer treatments.

According to the International Agency for Research on Cancer (IARC), approximately 19,2 million new malignancies will be diagnosed worldwide in 2020, with around 10 million people dying from cancer.

According to DVCStems and BioInformant, stem cell therapy costs between $5,000 and $8,000 per patient for simple procedures and above $25000 for complex ones. People from the middle and lower middle classes cannot use this technology due to economic disparities in the population. Moreover, disparities in the diagnosis and treatment of cancer through stem cell therapy severely impede the growth of the market for cancer stem cells.

The Global cancer stem market is segmented by mode of action and application.

Based on the method of action, the market is divided into targeted cancer stem cells and stem cell-based cancer. Depending on the mechanism of action, the market can be divided into two models of tumour treatment based on the biology of these cells and their role in the control of tumour progression. The first model targets CSCs with monoclonal antibodies, recombinant proteins, nanomaterials, and other natural substances. The majority of commercially available drugs aid in tumour shrinkage but do not treat the underlying causes of tumour progression, which can result in tumour resurgence.

On the basis of cancer type, the breast subsegment is projected to reach a market size of $900 million by 2030 and hold a substantial market share during the forecast period. This subsegment is mostly attributable to variations in people's lifestyles, hereditary influences, and alcohol and hormone consumption, all of which contribute to an increase in cancer patients worldwide. In addition, breast cancer is a prevalent human malignancy and the main cause of cancer-related death worldwide, driving the subsegment growth of the cancer stem cells market.

North America is anticipated to dominate the global cancer stem cell market. Due to technological advancements in cancer stem cell treatment, increasing research on cancer stem cells is increasing market demand. In addition, the increased incidence of nonmelanoma skin cancer in the United States is fuelling market expansion. Between 1994 and 2014, the diagnosis and treatment of nonmelanoma skin malignancies increased by 77%, according to the Skin Care Foundation. About ninety percent of skin cancers are caused by sun exposure.

North America Cancer Stem Cellsl market is expected to generate a revenue of around $2.1 Billion by 2030.

In the next years, Europe is anticipated to be the second-leading area in the worldwide cancer stem cell market. European nations cure cancer by replacing cancer stem cells in the tumour and administering focused, specialised care. Each year in the United Kingdom, over 55,000 women are diagnosed with breast cancer. The expansion of the cancer stem cell market is being driven by the increasing incidence of breast cancer due to bad lifestyle choices such as decreased physical activity, rising alcohol consumption, and obesity.

Asia-Pacific (APAC) Cancer Stem Cells Market is anticipated to be the fastest-growing area between 2022 and 2030. According to the WHO Cancer Report, lung, oral, lip, throat, and neck cancers are the most prevalent among men in India, while the increasing prevalence of cervix, breast, and ovarian cancers among women is driving market growth.

In European nations including Turkey, the United Kingdom, and Denmark, Cancer Stem Cells Market is anticipated to expand. Stem cell research is the fastest growing medical activity in Turkey due to the significant increase in stem cell transplants. Younger pool, current technology, and high-quality, low-cost stem cell treatment are major aspects that can increase stem cell investors' vast prospects. In addition, people in the United Kingdom are growing overweight and obese, which increases the likelihood of an increase in the number of cancer patients.

During the projection period, LAMEA is anticipated to have slow growth in the worldwide market. This is a result of Africa's inadequate healthcare infrastructure and delayed economic growth. However, expanding urbanisation, improving healthcare infrastructure, and high disposable income in Middle Eastern nations such as the UAE and Saudi Arabia are expected to drive growth to some extent.