Continuously positive airway pressure devices (CPAP) are extensively used by the patients suffering from obstructive sleep apnea as they aid in collapsing the airway that may block the normal breathing activity among the patients. 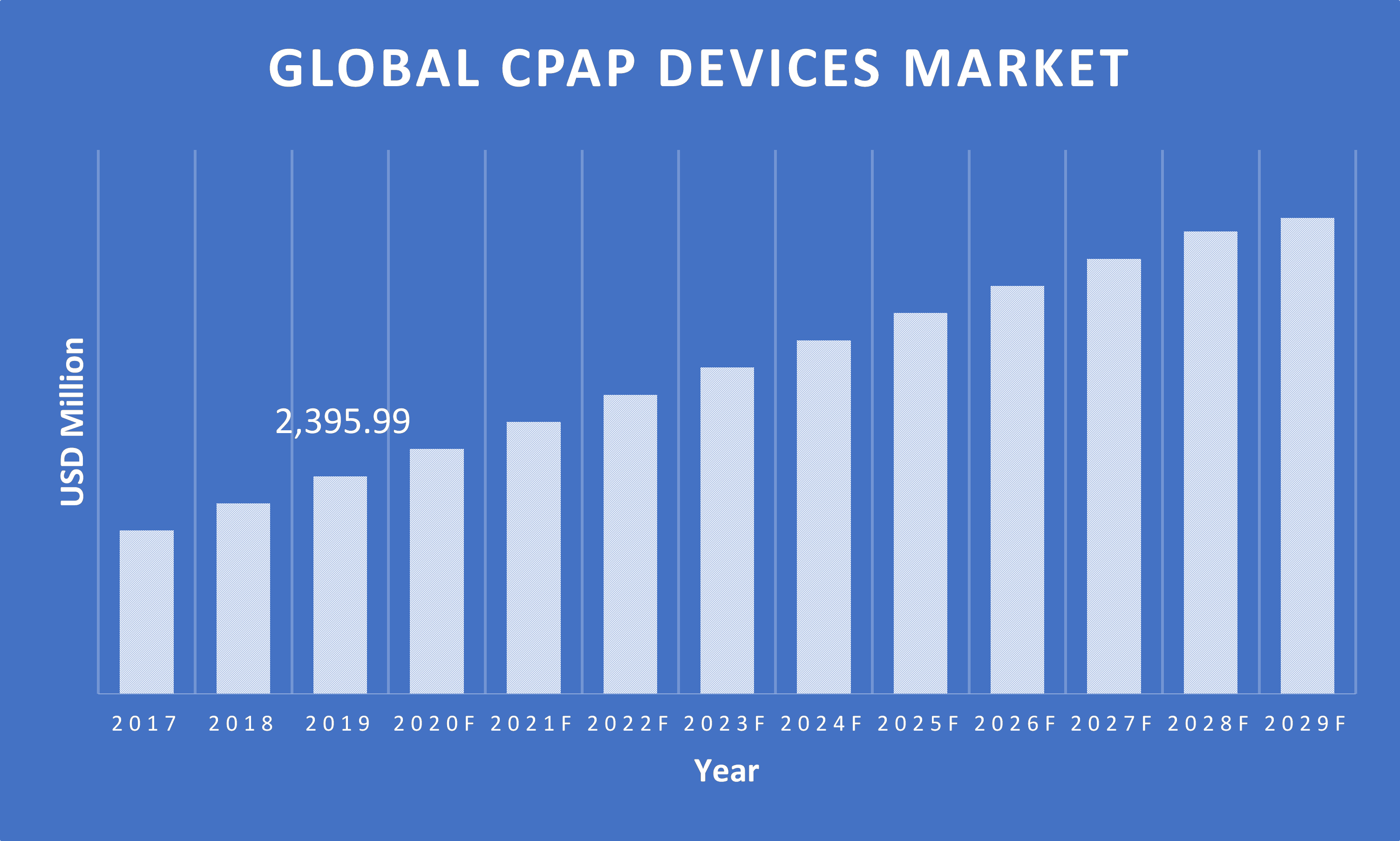 Globally, the demand for continuous positive airway pressure devices has been increasing at a steady pace, further offering a strong growth prospect for the market players during the forecast period. Sleep apnea leads to several health problems, including heart diseases, obesity, diabetes, and depression. Untreated sleep apnea, on the other hand, can lead to occupational injuries and a lack of job productivity. As per the Center for Disease Control and Prevention (CDC), more than 350 million people suffer from sleep apnea worldwide.

As per a 2016 report by the American Academy of Sleep Medicine (AASM), in the U.S., the annual economic burden incurred by undiagnosed sleep apnea was around USD 149.6 billion. Increasing awareness regarding sleep apnea and associated comorbid conditions is subsequently driving the adoption of continuous positive airway pressure devices. In addition to this, the governments across the globe have started focusing on the growing prevalence of obstructive sleep apnea and are formulating several programs to raise awareness about the condition, further driving the market growth. 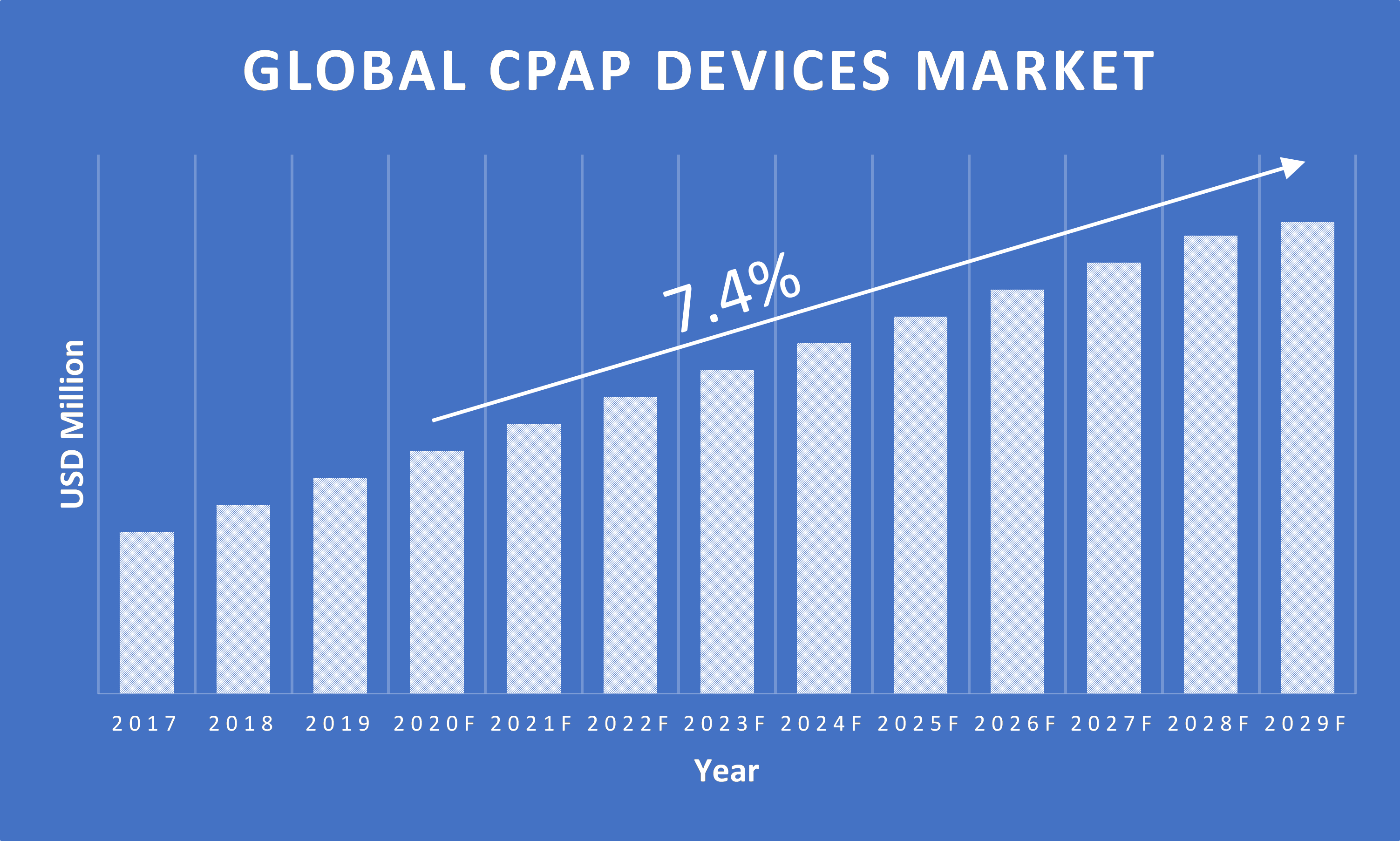 The advent of new technologies, such as an auto-adjusting system that enables the user to control the breathing habit and deliver the correct amount of pressure at the right moment with optimum ease, bolsters the market growth. CPAP devices are equipped with data-collecting features that enable health care practitioners to achieve greater and reliable clinical results. Thus, significant advancements in CPAP technology that are designed to enhance the therapy experience drive market growth.

The key manufacturers of airway pressure devices are actively working to improve their existing line of products in order to achieve a better compliance rate. The manufacturers are focusing on developing lightweight helmets with secure bands and smaller breathing helmets made of soft plastic.

Increasing patient compliance rate propels the CPAP devices market growth. About 80% of the patients suffering from sleep apnea opt for CPAP therapy. Most of the insurance providers grant reimbursements only when a patient abides to the compliance standards for a specified period of time in the first 90 days trial period, further impacting the market growth.

The CPAP device segment holds the highest market share on account of rising doctor prescription for CPAP devices to treat the patients suffering from sleep apnea as the first line of therapy. The segment is also largely driven by the low cost of the devices and technological advancements, which is further driving its adoption across the end-users.

For instance, in January 2019, InnAccel launched the world’s first portable neonatal CPAP device, which is designed to offer support to critically-ill babies with respiratory distress syndrome (RDS). The product addresses over 160,000 annual deaths of premature babies in India caused by respiratory disorders.

Hospitals across the globe carter to a large patient pool suffering from sleep disorders, which is a significant factor driving the hospital segment. The hospital segment is projected to hold the largest market share on account of the increasing number of private hospitals and favorable reimbursement policies. In 2017, there were around 4,700 sleep centers in the U.S. with a bed count of 7 to 8 beds in every lab. The home care setting segment, on the other hand, is projected to witness considerable growth on account of increasing demand for CPAP devices for home use. 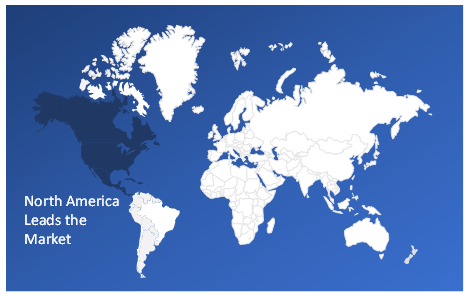 North America held the largest share in the CPAP devices market in 2019 and is projected to dominate the market during the forecast period. The region is backed by the presence of robust healthcare facilities and key healthcare players that are heavily investing in R&D activities to address the growing prevalence of sleep apnea. As per the American Sleep Association, in the U.S., around 50–70 million people suffer from different forms of sleep disorder every year. Whereas, in Canada, around 5.4 million people suffered from sleep apnea or were at higher risk of developing obstructive sleep apnea (OSA) in 2014, as per the Canadian Respiratory Journal.

In the U.S., favorable reimbursement policies offered by insurance providers, such as Medicare, strongly support the CPAP device market growth in the country. For instance, Medicare and other private insurance companies cover about 80% of the CPAP device expenses, further driving its adoption across several end-users. Apart from this, the rising prevalence of diabetes and obesity prompts the dire need for efficient CPAP devices across the region.

Asia-Pacific is projected to exhibit the fastest growth in the CPAP devices market on account of rapidly developing healthcare facilities, burgeoning healthcare spending, increasing R&D activities, and surging demand for technologically advanced CPAP devices in countries such as India and South Korea.

Increasing incidence of respiratory disorders, such as chronic obstructive pulmonary disease (COPD), tuberculosis, asthma, and sleep apnea, rapid technological advancements, and surging geriatric population drives the market growth. As per the Economic and Social Commission for Asia and the Pacific (ESCAP), in 2019, the geriatric population in the region reached 548 million. The governments are actively working to raise awareness and are organizing education campaigns such as the ‘Safe Lung Initiative,’ further driving the market growth.

What was the value of Global CPAP Devices Market in 2019?

What is the key factor driving CPAP Devices Market?

Which region is expected to hold the highest market share in the CPAP Devices Market?

Who are the active players in CPAP Devices Market?

How much is the CPAP Devices Market worth in the future?

Which is the leading segment in the CPAP Devices Market?

CPAP Device Segment is expected to be a leading segment in CPAP Devices Market during the forecast period.