Understand the influence of COVID-19 on the CRT Monitor Market with our analysts monitoring the situation across the globe.

Cathode Ray Tube (CRT) Monitor forms a significant part of a computer as they are not only used for the display of input or output data but also for data entry terminals. However, the CRT monitor industry is declining on account of the advancement in technology such as LCD monitor, LED monitor, OLED monitor, among others. CRT monitor offers a wide variety of attributes that includes compact size and easy-to-operate features. Despite this, a CRT monitor also handles more data at a much faster rate. Currently, inclination toward OEM contracts to manufacture with small scale units of CRT monitors to reduce the existing inventory and overheads is a recent trend among the vendors.

Despite the advancement in technology such as LCD monitors, OLED monitors, others, major vendors such as Dell, Samsung, HP and others are still investing in CRT monitors. The growth in investment is attributed to the growing application of CRT monitors in various industries such as gaming, educational institutions, healthcare, among others. In 2016, Dell launched its 24 inch CRT monitor calibrated to Digital Imaging and Communications in Medicine (DICOM) that enables to review consistent and accurate images. The following figure shows the increase in the research and development activities of HP from 2015-2019. 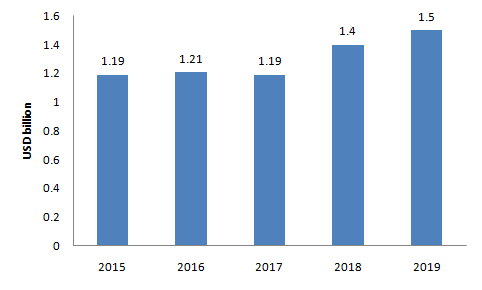 Random scan display CRT monitor is presumed to witness an increase in the market share during the forecast period on account of a wide range of attributes that includes high-resolution, easy modification, others. However, the high cost of a random scan CRT monitor hinders the current market growth. Moreover, it is expected to grow with an increase in the availability of low-cost sensors during the forecast period. Also, increasing gaming application that requires high resolution is likely to pave the way for random scan display CRT monitor.

CRT monitor has witnessed significant growth in the gaming industry on account of a broad variety of offerings involving low-latency, high refresh rates, reduced input lag, and low cost, among others. Also, better motion handling in the CRT monitor comparable to LCD technologies is the primary factor propelling the growth of CRT monitors in the gaming industry. In 2016, Dell launched Dell P7 CRT monitor for gaming applications that is well loaded with features such as 300HZ frequency, high-resolution, low-cost, among others. The product has launched to have a faster response rate to input and less blur motion comparable to LCD.

The industrial segment exhibit the low adoption rate on account of advancements in technologies such as LCD display, OLED, and LED, among others. Additionally, the factor that led to the adoption of LCD display over CRT monitor are low-weight, large display, high picture quality, among others. However, Small and medium-sized enterprises (SMEs) still prefer CRT monitors over LCD monitors on account of a wide variety of attributes. These include low cost, better color representation, and the ability to handle multiple resolutions, harder to damage and among others.

CRT monitors are being superseded by LCD monitors in residential and business sectors on account of low power consumption, compact size, and other attributes. However, many SMEs such as gaming, hotels, educational institutions, others, prefer CRT monitors over LCD monitors on account of budget constraints, ability to withstand multiple resolutions, high frequency comparable to LCD monitors, better color representation, and others. Furthermore, the burgeoning SMEs on account of a wide range of government initiatives and advancements in technology are likely to pave the way for the CRT monitor industry growth. For instance, in 2020, the European government has created an Entrepreneurship 2020 Action Plan that allows entrepreneurial education and training to support growth and business creation and among others. These enable the SMEs to adopt CRT monitors for its various business purposes such as schedule tracking, resource allocation, and others.

Moreover, CRT monitors are highly preferable in communication satellite and modern aviation radar systems on account of its ability to generate high-frequency signals. Also, the booming gaming sector to support multiple resolutions is presumed to create demand for CRT monitors during the forecast period.

North American countries such as the U.S. and Mexico have witnessed significant growth in the adoption of CRT monitors despite early technology advancements such as LCD and Plasma display. The growth is attributed to an increase in SMEs, which prefer CRT monitors on account of budget constraints. According to industry experts, SMEs are the significant driver of the U.S. economic growth accounting for 99.7% of the U.S. businesses. These enable the increase in the adoption rate of CRT monitors for a wide variety of business purposes such as schedule tracking, resource allocation, others. Also, the thriving gaming industry is likely to pave the way for the adoption of CRT monitors in North American countries. According to Forbes 2019, the U.S. has witnessed a 13.5% growth in the gaming industry, compared to previous year.

Asia-pacific countries such as China, India, and Japan are the fastest-growing marketplaces on account of favorable government initiatives that led to an increase in the development of SMEs. Government of India (GOI) initiated a program called Make in India for the economic growth of the country as it aims in creating a wide range of SMEs particularly automobiles, aviation, chemicals, IT & BPM, pharmaceuticals, construction, defense manufacturing, electrical machinery, food processing and others. These enable SMEs to adopt low-cost CRT monitors for a wide variety of industrial purposes. Also, the demand for old CRT monitors in China and India is high as they recycled to create raw materials for building new TVs. Furthermore, South Korean manufacturers such as Samsung are making advancements in technology to develop thin CRT monitors, thereby likely to pave the way for growth in the adoption of CRT monitors.

The global CRT monitor is a highly fragmented market that focuses on technology innovation rather than merger and acquisition to meet the growing consumers’ demand and increase geographical reach. Some of the key vendors in global CRT monitor industry are; Samsung (South Korea), Dell (US), Lenovo (Hong Kong), Acer (Japan), Apple (US), HP(US), ASUS(Japan), Microsoft (US), MSI (Japan) and Alienware (US).

What is the key factor driving CRT Monitor Market?

Increasing investment in R&D activities, an increase in the adoption rate of CRT monitors for a wide variety of business purposes are the key factors expected to drive CRT Monitor Market during the forecast period.

Who are the active players in CRT Monitor Market?

Which region is expected to hold the highest market share in the CRT Monitor Market?

Which is the leading segment in the CRT Monitor Market?

Raster Scan Display Segment is expected to be the leading segment in CRT Monitor Market during the forecast period.