The demand for resin-based shielding materials is increasing at a fast pace owing to their lightweight. These materials are used to protect against electromagnetic interference that may be generated between two electronic products.

The smart home appliance market is expected to witness a swift growth on account of increasing consumer spending and high demand for smart appliances. The key players in the market are integrating the Internet of Things (IoT) with home appliances to attract consumers in the global market. As the global economies are witnessing a massive influx of population from rural areas to urban areas, the concept of smart cities has gained popularity and emerged as a trend. This has led to the establishment of smart city projects in various economies, further boosting the demand for smart lights and smart appliances.

Consumers are inclined toward purchasing smart door lock systems, LED lights with Bluetooth connectivity, Wi-Fi-enabled air conditioners and other appliances. In light of the growing adoption of smart appliances across the globe, the designers of the products seek to pack more features in a compact size. There is a high emittance of electromagnetic interference as numerous devices are connected with each other posing severe risks, further driving the market growth.

Globally, there has been a rise in the use of electronics and various other smart gadgets across many industries. Electronic devices and the Internet of Things (IoT) have gradually become a part of the daily lives. The advances of IoT and artificial intelligence have had a positive impact on the military, aerospace, and healthcare industries. The increasing adoption of technologies has surged the frequency of electromagnetic interference between the devices, which may result in device failure or accidents. Therefore, various governments have imposed stringent regulations on the use of EMI shielding materials for electronic devices to make them compatible with various conditions.

In the last few years, the investments in R&D activities have been increasing at a significant rate as several key players are striving to gain a competitive edge in the global market. The companies are unveiling new solutions for various EMI wave radiation issues. For instance, Bekaert introduced EMI shielding fibers and yarns to protect the people working in close proximity of high-voltage lines. The market players are channelizing efforts to produce EMI shielding materials that are effective, affordable, and meet the market needs.

Companies are deploying techniques to improve the current production and efficiency of light-shielding materials, such as plastics and other components. The use of polycarbonate and other types of plastics coupled with particular metal alloys are helping companies deliver affordable, suitable, and lightweight materials.

The Proliferation of Wireless Technology: A Key Market Opportunity

Rapid growth of wireless technology is paving the way for EMI shielding materials worldwide. Wi-Fi, Bluetooth, Global Positioning System (GPS), smart speakers, and voice-controlled intelligent personal assistants have created umpteen opportunities for EMI wave shielding materials market. The advanced navigation systems built in the car and wireless communications within the hospitals are offering more features than ever for the consumers. All these devices need protection in order to avoid inconvenience to consumers and save lives in critical industries, such as military and aerospace, among others.

Recently, there has been a huge demand for Amazon’s voice-enabled technology from the automakers. Amazon is expecting to capitalize on the growing demand for connectivity in vehicles and provide a seamless ecosystem for ‘Alexa on the Go’. In 2019, the company announced partnerships with almost ten automakers and is expecting additional tie-ups and expanded relationships with existing automaker partners in the next year. Some of the automakers partnered with Amazon include Ford Motor, Audi, General Motors, BMW, and Volkswagen for ‘Alexa in-vehicle 2020’. Earlier in 2019, Audi embedded the technology into one of its all-electric Audi e-Tron.

Thermoplastic to Hold the Highest Market Share during the Forecast Period

The thermoplastic family can be reheated, reshaped, and frozen repeatedly, making it an ideal choice for the EMI shielding material manufacturing. This also allows the thermoplastic composite to be recycled at the end of its shelf-life, which cannot be achieved with thermosetting resins. Thermoplastics have gained popularity as they are light in weight and protect sensitive electronic components from incoming EMI. They also prevent excessive emission of EMI to other susceptible equipment.

Rising FDI Investments in Telecommunication to Boost the Market Growth 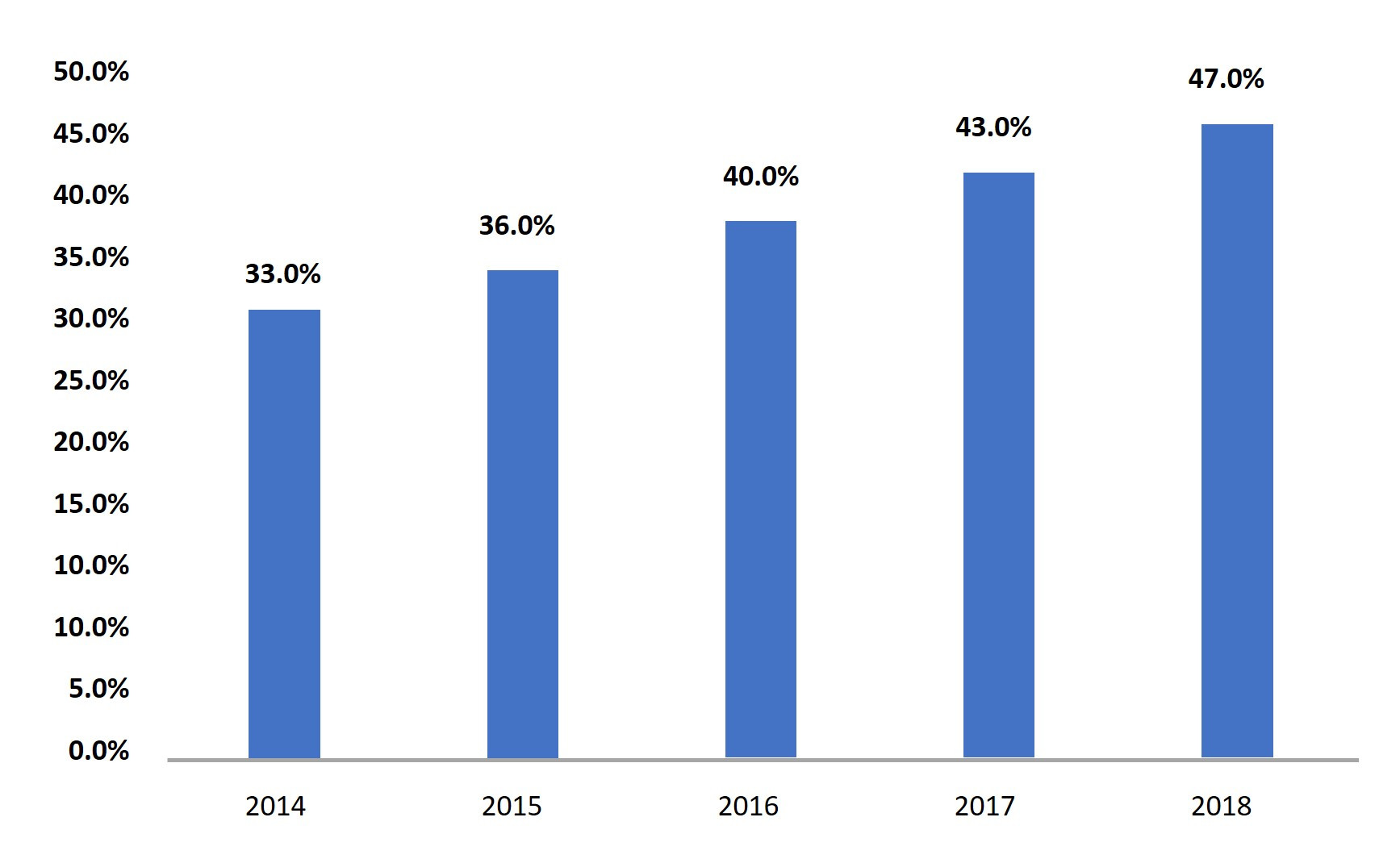 As per the statistics above, in 2018, around 3.5 billion people (47% of the population) were connected through the internet. The healthy growth in the number of people using mobile phones from the previous year is encouraging players to deploy more technological products in the market. The introduction of smartphones, tablets, smartwatches, smart security devices, monitoring devices, and smart home appliances has urged the telecommunication industry to provide customers with faster services and connectivity. Factors such as cloud computing, Internet of Things (IoT), wide coverage of satellites, and the development of 4G and 5G networks are considered as significant growth factors of the telecommunication services and products market.

North America’s EMI wave shielding material market is backed by the strong presence of aerospace and defense industries and substantial investments in smart technologies. The U.S. aerospace and defense industry is considered as one of the world leaders in designing, manufacturing, and developing of technologically advanced aircraft, military equipment, and space systems. Electromagnetic interference (EMI) can lead to the degradation or malfunction of aerospace equipment. The EMI radiations can affect the radio and radar signals, disrupting the communication between the pilot and the control tower.

Electronic devices carried by air passengers such as portable laptops, cell phones, and electronic gadgets, among others, are known for emitting high EMI waves, resulting in several aviation incidents. New digital aviation systems and flight control systems are contributing to higher amounts of radiation; as a result, EMI shielding is a crucial component in all avionic systems. Several government regulations and standards have been devised to reduce EMI emittance. As per the statistics recorded by the Aerospace Industries Association (AIA), the U.S. aerospace and defense industry generated sales revenue to the tune of USD 929 billion in 2018, up by 4.17% from the previous year.

Which is the leading segment in the EMI Wave Shielding Materials Market?

The Thermoplastic Segment is expected to be the leading segment in EMI Wave Shielding Materials Market during the forecast period.

How much is the EMI Wave Shielding Materials Market worth in the future?

Which region is expected to hold the highest market share in the EMI Wave Shielding Materials Market?

Who are the active players in EMI Wave Shielding Materials Market?