Collagen, which is found in the bones and skin of animals, may be hydrolysed to produce gelatine. Gelatin is an animal protein. It is very helpful when used as a thickening, gelling agent, and binder all at the same time. In addition to its usage in confectionary, the natural protein known as gelatin has a variety of additional uses. It is manufactured from bovine bone, pig skin, and bovine hide, and it possesses a great degree of versatility in its applications. The primary element that is responsible for the expansion of the market is the growing desire of consumers for high-quality food items, as well as the expanding application of gelatin in desserts and other types of specialised food products. The rising demand for gelatin from the food and beverage sector as well as the expanding applications of gelatin in convenience foods are expected to further drive up the total market demand for food grade gelatin.

A comparatively high number of glycine, proline, and alsnine may be found in gelatin, which possesses a distinctive arrangement of amino acids throughout its sequence. Gelatin's bioactivities are the consequence of its fundamental structure including physiologically active peptide sequences, which is why gelatin is so versatile. Both the functional food market and the food supplement industry are seeing growth at a rate that is significantly quicker than average. The rising desire for high-quality food items among consumers is driving demand growth within the speciality food business. Protein is the only component of pure food gelatin powder; there are no carbs or lipids present. There are around 23 calories and approximately six grammes of protein in a gelatin powder package that is one ounce in size. The manufacture of artisanal pastries, sweets, and a variety of other specialised food items requires the utilisation of gelatin foundation, which is created by combining gelatin powder, sugar, and other components. Food gelatin that has been dried and hydrolyzed has more than 92% protein. Hydrolyzed gelatin is a kind of gelatin that is used to add protein to meals that are consumed as part of a diet. In recent years, the production of food-grade gelatin has been propelled forward by an increase in the worldwide demand for functional and specialised foods and beverages.

The Europe food grade gelatin market size is expected to reach a valuation of  USD 721 million by 2030, growing at a CAGR of 3.6% during the forecast period (2022–2030). Gelatin is a kind of protein that occurs naturally and is produced from the partial hydrolysis of collagen, which is normally present in the skin and bones of animals. Gelatin possesses an unusual amino acid sequence that is characterised by a high concentration of glycine, proline, and alanine. The core structure of gelatin contains physiologically active peptide sequences, which are the source of gelatin's many bioactivities. Because of its one-of-a-kind qualities, it is ideally suited for usage in applications requiring gelling, binding, emulsifying, and thickening. In the food industry, it is used to a variety of uses, the majority of which include giving products more adaptability, homogeneity, and durability. In the world of gastronomy, gelatin is utilised in the making of confections such as sweets, marshmallows, and desserts when it is in the form of water or fluid polyhydric alcohols.

Regarding the Europe food grade gelatin market, it is anticipated that the Europe area would achieve a compound annual growth rate (CAGR) of 3.45% over the next several years. The primary factor that is driving the expansion of the food gelatin market is the rising demand for nutraceutical products in the market regions of the Europe region. This demand is a direct result of the population's increased consumption of multivitamin tablets, which is also the primary factor propelling the growth of the food gelatin market.

When considering the market for food gelatin in Europe as a whole, the nations of Russia, Italy, Spain, France, Germany, the United Kingdom, and the Rest of Europe are broken down into their respective categories and evaluated individually. The expenditures that are being made in the food and beverage sectors of the various nations in the area with regard to the inclusion of functional ingredients for a variety of advantages may be seen to be expanding. In countries like as Germany, the expansion of the food gelatin market is influenced by the new product launches and supplies made available by regional companies in the region. Because of this, the atmosphere becomes competitive with players from other countries, which is beneficial to the expansion of the country. The chocolate confectionery industry in Germany has seen significant expansion as a consequence of the rising demand from customers in combination with the excellent economic conditions in the country. This results in an increased consumption of food gelatin, which in turn propels the expansion of that product's market in the region. Additionally, the country is demonstrating a shifting preference towards items that are not derived from animals, which is another factor that is expected to aid the expansion of the food gelatin market.

The pandemic caused by COVID-19 had a significant effect on both enterprises and the economy. It also brought about a change in the purchasing habits of customers, leading them to favour alternate distribution methods. The majority of gelatin is sold through convenience shops and supermarkets; hence, the retail channels were severely impacted when a large number of merchants either went out of business or reduced the number of hours they were open. As a direct response to the epidemic, several businesses, such as Walmart, have announced that they would be modifying their store hours, while other businesses aim to temporarily close their stores. In addition, businesses reduced their working hours to help their employees deal with the restocking and cleaning of stores at midnight.

The share Europe food grade gelatin market throughout the world may be broken down into several categories depending on the source and the use.

Based on the various gelatin sources, the global market for food grade gelatin is dominated by pig skin, which is expected to produce a total of USD 865 million by the year 2030 at a compound annual growth rate (CAGR) of 3.8%. The market for pig skin gelatin is being propelled forward by the growing interest in functional foods. As a thickening ingredient, it is also frequently found in desserts such as ice cream, yoghurt, and several other sweets. In addition, there is a plentiful supply, it is easily accessible, and it may be biodegraded, all of which contribute to the rising demand. The market for pig skin gelatin is being driven by a number of factors, including the growing movement away from the use of synthetic chemicals in favour of natural alternatives, as well as the functional properties of pig skin, which include its ability to combat hypertension and free radical damage.

When it comes to applications, the nutraceuticals sector holds the biggest market share. It is anticipated that it would produce $875 million by the year 2030, expanding at a compound annual growth rate of 3.8%. The industry of collagen supplements was launched as a result of the correlation between gelatin and the positive effects it has on one's health. Dietary supplements that are made of gelatin provide a wide range of potential advantages to one's health. The end result of hydrolyzed gelatin has a low molecular weight, which makes it simpler for the body to digest, absorb, and transport amino acids throughout the body. This has led to an increase in the usage of hydrolyzed gelatin in dietary supplements. 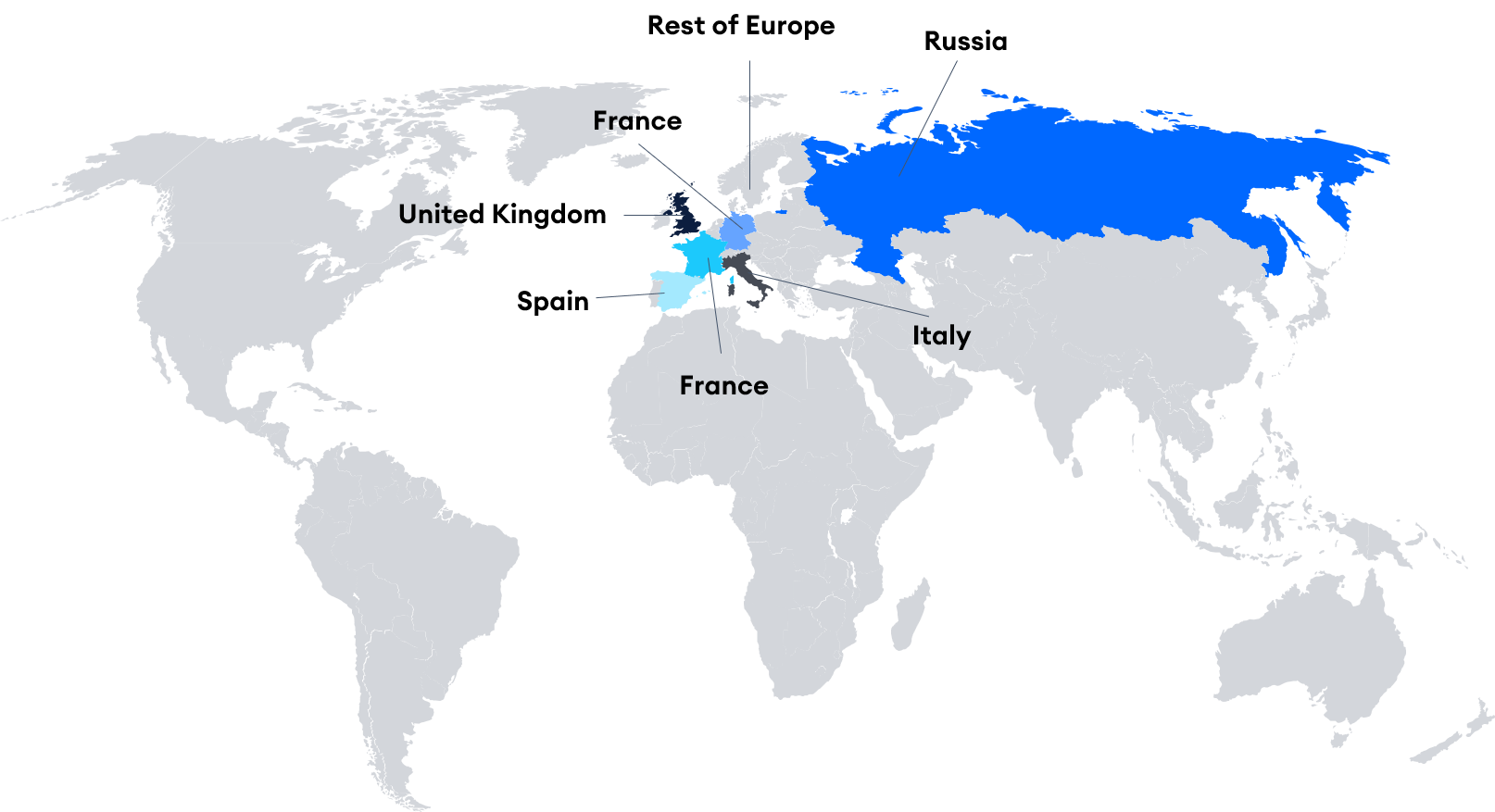 At a compound annual growth rate of 3.6% during the projected period, it is predicted that Europe would have the greatest market share, totaling USD 721 million by the year 2030. Food manufacturers have been prompted to include gelatin as a result of the high consumption of sweets and baked goods, such as jellies, in the country. This has resulted in an increase in the customer base for gelatin. In addition, the expanding use of gelatin in foods and beverages, particularly dairy products like milk, cheese, yoghurt, and sour cream, as well as its applications in nutraceuticals due to its excellent stabilising and binding properties, contribute to an increase in the demand for gelatin. With respective market revenues of USD 79 million and USD 65 million, Germany and the United Kingdom outpace Italy and France in terms of market revenue.

December 2020: Gelita, one of the major suppliers of collagens and proteins in the world, invested USD 10.97 million to expand its facility in Eberbach.