Food grains are among an essential dietary component; around 48% of human calorific need, or food energy, is met by the consumption of cereals. Approximately half of the grains grown around the world are harvested for eating directly. Wheat bread, corn tortillas, and steamed rice are some examples of the end product forms in which grains are consumed. In some regions, cereals are stapled foods and eaten frequently.

Changing food habits, consumer behavior, geopolitics, and trade sanctions are some of the primary factors affecting the food grain market. Over the years, the market has grown proportionately with the increasing population. The use of food grains in a myriad of applications makes them a profitable and competitive venture to invest into.

There have been significant advances in farming practices across the globe. Automation has managed to significantly increase crop yield, and an overall increase in income has led to growth in investments in new farming machines, which in turn has led to an increase in the import of machines for the cleaning, sorting, and grading of seeds, grains, and dry legumes. These trends are expected to accelerate the growth of the food grain market in the years to come. 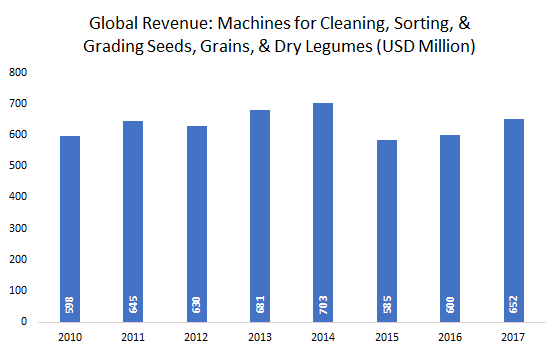 Automation in Farming Activities to Increase Production of Food Grains

The global population is anticipated to surpass the 9-billion mark by the year 2050. This rise in the population will put farmers under enormous stress as they will have to increase production by at least 70% to feed the world. The speed of production is also increasing at a rapid pace. Manual labour will prove to be counterproductive in an era that demands higher yield in s shorter time.

Advancements in technologies and large-scale automation in machines used for farming are expected to aid in increasing the production of food grains. For instance, the global wheat stock and production increased to over 1,000 MMT for the year 2019–2020, up from 780 MMT in 2005–2006 This underlines the significant impact automation has had on farming activities, and how it has managed to increase the overall yield of products.

Many companies are integrating the Internet of Things (IoT) and Artificial Intelligence (AI) in farming equipment to increase the productivity of various farming operations. For instance, companies, such as Abundant Robotics, Rabbit Tractor, and Bear Flag Robotics, have reduced the overall labor time in farming activities and made robotics easily accessible and affordable for farmers.

The use of modern technology and its accessibility for farmers at affordable prices are expected to create windfall gains for the food grain market. This trend of increased automation and decreased downtime has seen farmers in various regions investing in machinery. However, the trend in automation is only limited to developed economies that hold a higher share in the trade import of agricultural machinery. 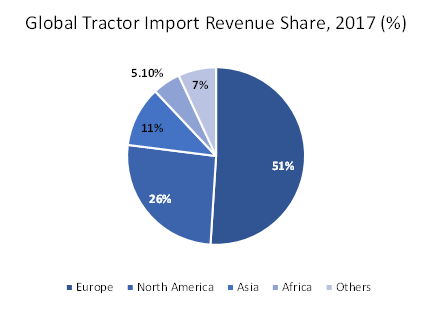 Wheat: A Significant Food Grain by Production & Consumption Due to its Widespread Processing for Many Different End-Products

The food grain market has been segmented on the basis of grain type, sales channel, and application. Based on grain type, the market is segmented into rice, wheat, corn, barley, sorghum, and others. Wheat is anticipated to hold a dominant share in the market. It is processed to make an array of food and beverage products, such as cereals, beers, and bread, among others, which is one of the foremost aspects that keeps the demand for wheat high. The Food and Agriculture Organization (FAO) estimated the global cereal production to be 2,721 million tonnes in 2019, surpassing the 2018 global production by 2.4%. 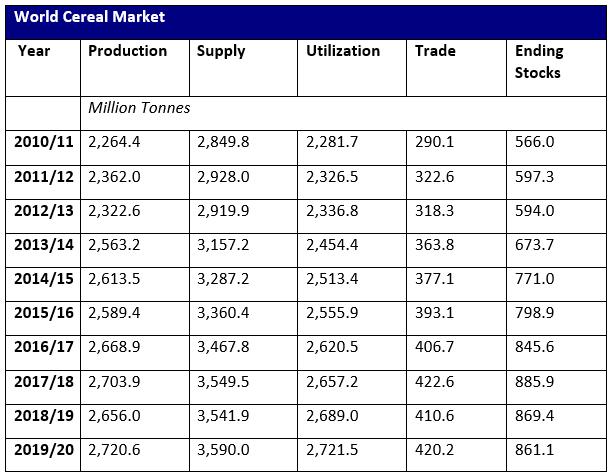 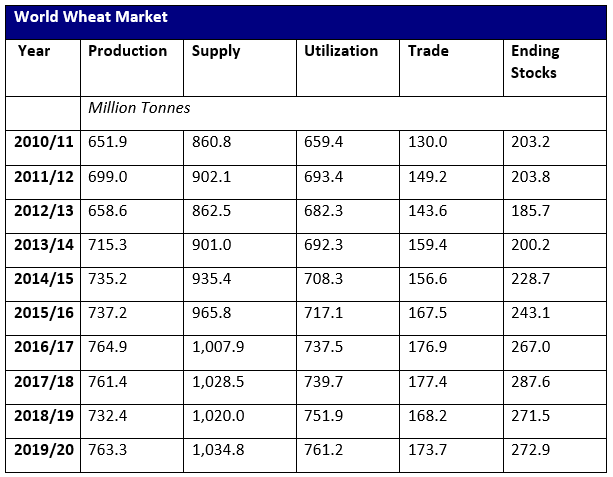 By application, the animal feed segment accounts for a substantial value share in the food grain market. Pets and domesticated animals, ranging from dogs to cattle, are fed food rich in grains and grain products. Governments around the globe have been focussing on initiatives to enable farmers to invest in animal husbandry. In many economies, livestock is a primary source of income. As per the FAO, livestock farming contributes to around 40% of the global agriculture economy and supports the livelihood of approximately 1.3 billion people. Livestock consumes around 6 billion tonnes of feed dry matter, which is why the animal feed is expected to hold a large market share.

There has been an increase in pet adoption, especially in developed economies. The U.S., Germany, France, are among the leading economies anticipated to boost the demand for food grains in pet food application. For instance, the total export related to dog or cat food (retail sales) was around USD 12.4 billion in 2017, of which the U.S. and France held an 11% share and Germany a 12% share. 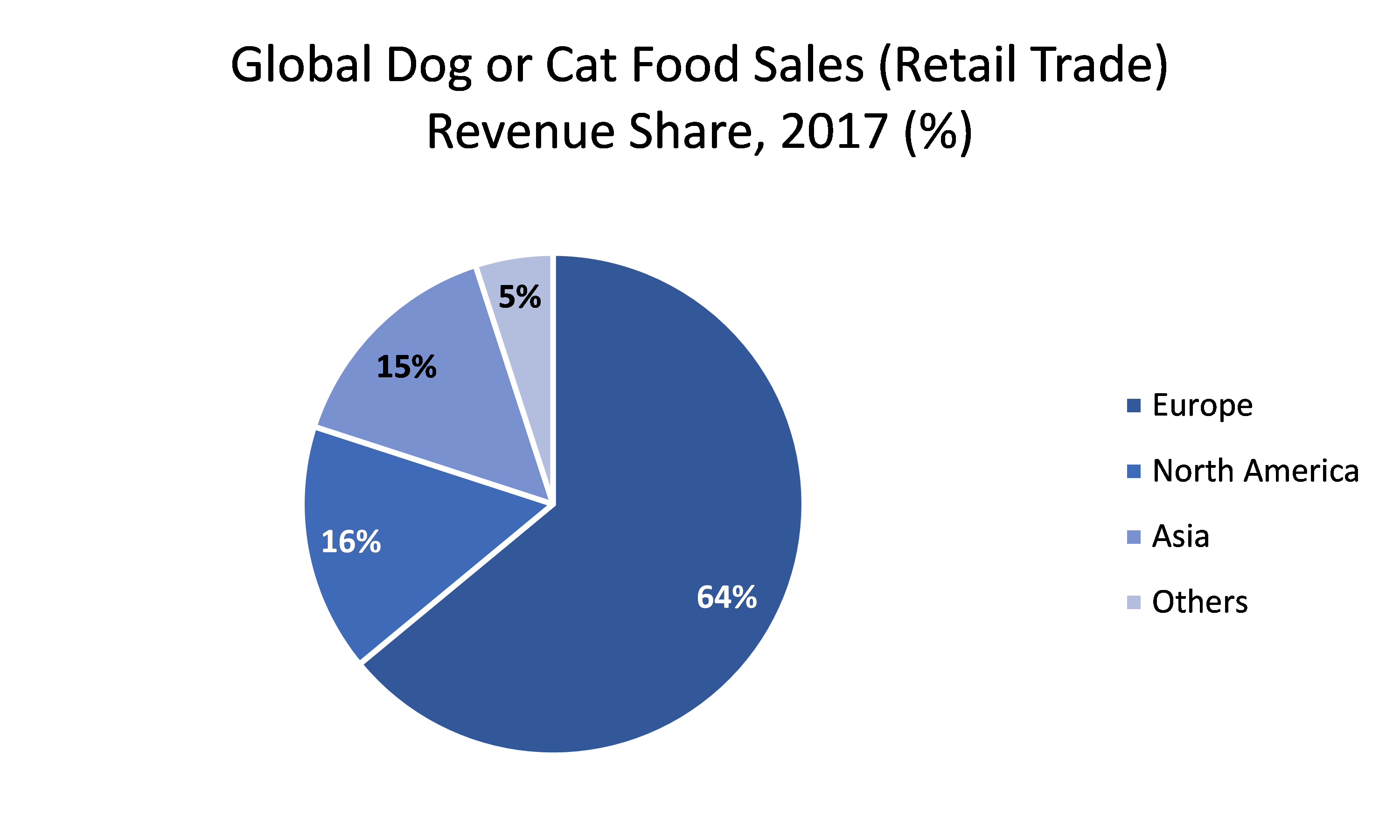 Asia-Pacific: A Leading Consumer & Producer of Food Grains & the Fastest Growing Market with the Largest Share of the Pie

By region, Asia-Pacific is anticipated to hold the largest share in the global food grain market and register the highest growth rate during the forecast period. Most of the economies in the region are agrarian by nature, which is one of the key factors governing the growth of the food grain market in the region. As per the U.S. Department of Agriculture, China is projected to account for about half of the global wheat stock while India is pegged to be the third-largest global exporter of wheat. In addition, food grains are staples in most of the economies in Asia-Pacific, which makes the region a leading consumer.

Russia, Ukraine, the U.S., and Canada are some of the other notable contributors to the global market, and Egypt, Bangladesh, and Turkey are pegged to be key markets as in terms of imports. However, trade sanctions being levied on some of the economies and the global attitude toward adopting protectionist policies are expected to restrict the food grain market to a certain extent.