Gasifier is extensively used in the chemical industries to convert organic carbonaceous materials into carbon monoxide, carbon dioxide, and hydrogen. The conversion is performed at a high temperature of 700 °C and above, without combustion in a controlled environment. The gasification market is projected to witness significant growth during the forecast period. As per the Syngas Technologies Council report of 2019, there are over 272 operating gasification plants across the globe with 686 gasifiers, of which about 33 gasification plants are located in the U.S. alone.

Rising Demand for Gasifiers in the Cement and Pulp Industries

Gasifier is extensively used in various industries such as chemical, power, liquid fuel, fertilizer, gaseous fuel, and cement industries. It has been witnessing a significant demand for the cement industry as it can be retrofit with the existing device, such as a kiln. Similarly, the paper and pulp industry uses boiler in which gasifier can be retrofitted and the generation of power r can be done by connecting gasifier direct to the boiler. Such advantages have created a demand for gasifier in umpteen industries, further driving the market growth.

In the last few years, numerous technologies have been introduced for waste to energy generation, such as gasification and incineration. As per the Global Syngas Technologies Council (GSTC), the gasification technology is extensively used to convert municipal solid waste (MSW) into valuable energy in the U.S.

The incineration technology, on the other hand, converts MSW to energy; however, gasification is considered cleaner than incineration as it directly produces syngas that can be used to generate electricity in the industries. Rising awareness regarding waste management drives the market growth; as per the Johns Refuse & Recycling, the U.S. generates about 250 to 400 million tons of garbage each year, which is about 4.6 pounds per person/day. 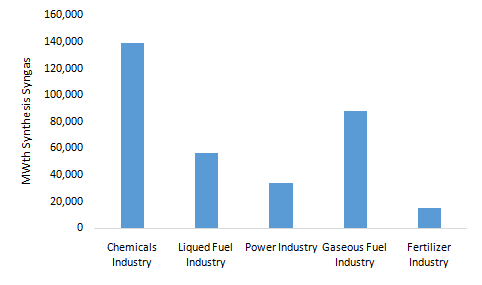 The demand for gasifier has been increasing at a considerable rate in the power and liquid fuel industries in the last few years. The syngas produced by the gasifier can be used to run a diesel engine, further compelling the manufacturers to develop diesel engines. Gasifiers can also generate electricity when connected with electric generator. As per the Punjab Energy Development Agency (PEDA), burning 1-meter cubic of syngas will generate thermal energy of about 4.5 to 5.0 MJ. The flame temperature of 1200 °C can be obtained using optimal pre-mixing of oxygen with producer gas.

Gasifier is considered as a good gas generator as it can be retrofit with devices such as dryers, boilers, furnaces, and kilns,. Gasifiers are also used to generate electricity; as per the PEDA, 1 Kg of biomass can produce about 1 unit of electricity. In the case of thermal application, thermal energy generated by 4 kilograms of biomass is equal to 1 Kilogram of diesel or furnace oil.

Micro-scale application uses low power gasifiers, ranging between 1-7 KW, and is used by farmers for irrigation purpose in the developing countries.

Large-scale application includes generation of producer gas and electricity in the chemical and power industries, ranging above 500 KW.

Asia-Pacific dominates the gasifier market as the region is backed by the presence of China and India. As per the study commissioned by the Syngas Technologies Council in 2019, China has the largest number of gasification plants. Australia also holds a significant share in the regional market. According to the GSTC, the gasification capacity of Asia and Australia is around 250 K MWth, exceeding the world’s gasification capacity. The rapid expansion of chemical, fertilizer, and coal-to-liquid industries in China, India, Japan, South Korea, and Malaysia drive the regional market growth. In India and China, rural electrification is the need of the hour, and the countries may switch to biomass gasifiers in the coming years. 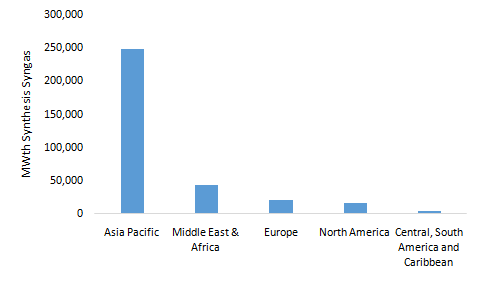 Who are the active players in Gasifier Market?

Which is the leading segment in the Gasifier Market?

Chemical Industry Segment is expected to be leading segment in Gasifier Market during the forecast period.

Which region is expected to hold the highest market share in the Gasifier Market?

Asia Pacific is expected to hold the highest market share in Gasifier Market.

What is the key factor driving Gasifier Market?

Rapid expansion of the chemical industries, growing application of gasifier in power industry and liquid fuel industry are the key factors expected to drive Gasifier Market during forecast period.

Call us, email us, or chat with us! We encourage your questions and feedback. We have a research concierge team available at all times, and included in every purchase.
Price Starts From
$4250