The International Telecommunication Union (ITU) has highlighted the 5G (5th Generation) network as one of the most innovative fields for enabling smarter societies. 5G refers to next-generation mobile standards that will deliver improved end-user experience by offering new applications and services with gigabits of speed and significantly improved performance as well as reliability. In upcoming years, 5G will enable new use cases such as smart cities, smart agriculture, logistics, and public safety agencies.

The list below covers the standards stated for 5G technology & equipment goals.

SDN or Software Defined Networking, is a vital component in overall 5G infrastructure primarily adopted for achieving increased flexibility and agility. Its main function is to create architecture for network programmability, supporting the creation of multiple network hierarchies. In simple terms, SDN acts as a direct control that manages the entire network with its software entity termed as ‘controller,’ shifting the focus from hardware-based operations. One of the primary reasons behind the adoption of this technology is the higher price of 5G hardware equipment. As the network architecture expands, the demand for specific network equipment also grows, which in turn increases overall operational cost. According to our forecast, the total Capex cost will grow from 60% in 2019 to 90% by 2025. Additionally, this cost is estimated to vary based on the geographical variation. The SDN paradigm will help in increasing overall networking efficiency by imparting scalability with a higher quality of services, thereby bridging the gap between business needs and management systems.

Network Function Virtualization (NFV) primarily portrays a picture of the VMware adopted in computer systems for replacing additional hardware requirements and ensures cost reduction in overall operations. In a similar manner, NFV in 5G primarily replaces the need for dedicated hardware devices such as routers, load balancers, and firewalls with virtualized instances running as software on commercial off-the-shelf (COTS) hardware. Adopting this tech can improve overall system functionality with advantages such as increased automation, operational agility, and reduced capital expenditure. Favorable initiatives, including Linux Foundation’s ONAP, ETSI’s OSM, and SK Telecom’s T-MANO, will also bolster the adoption of VNF. According to our estimate, the adoption of both SDN and NFV can save around 45–50% in overall capital expenditure, establishing a significant relationship in the demand and supply model.

Multi-Access Edge Computing (MEC) is a key supporting tech in 5G infrastructure, integrated primarily for achieving low latency and higher quality of services within overall operations. As MEC works on both 4G and 5G networks, it widens the application scope and provides relevant benefits for both consumers and enterprises. The technology also possesses colossal potential in the overall market growth scenario with reference to enabling the integration of favorable technologies, including machine learning and cognitive computing. This scenario has escalated the demand for MEC, enabling its adoption by key telecom players. For instance, the MEC testbed is installed by Vodafone in the U.K. lab and at the Aldenhoven (automotive) Testing Centre in Germany. Additionally, some prominent cities such as Milan possess significant growth potential for MEC technology due to the adoption of key 5G programs. 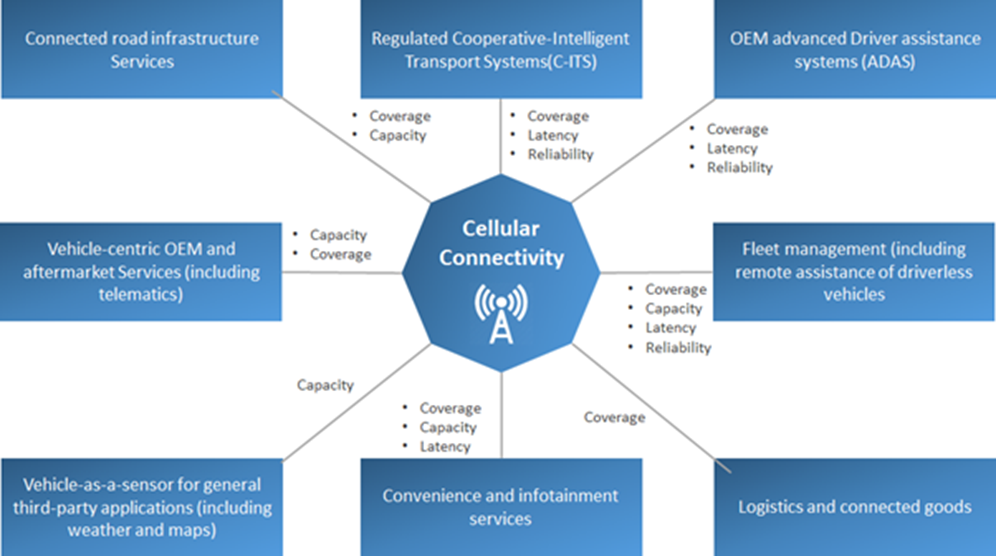 5G technology will pave its way in every manufacturing sector, and the commercial application is expected to hold a significant market share on account of the digitalization of the retail sector. Retailers are using digital technologies to enhance the in-store experience for customers as well as understand consumer behavior to gain high revenue margins. This trend has established a strong growth platform for the ‘Smart Retail’ concept. This concept enables personalization of a customer’s experience in both an online environment as well as at a physical outlet. The high bandwidth capabilities and low latency rates of 5G will play a vital role in this sector as the volume of data to be transferred will increase with the materialization of this concept in the future.

The global consumer electronics sector is evolving at a rapid pace and expected to witness the emergence of several new consumer technologies such as 5G enabled smartphones, advanced artificial intelligence (AI) applications, and 8K resolution television sets, among others. Considering 5G enabled smartphones and other associated devices, consumers are willing to upgrade to a 5G handset.

Sustaining competition is imperative in the manufacturing sector, and this goal can be achieved through significant gains in efficiency and profitability by means of new process innovations. For instance, the continued automation of manufacturing robots and warehouse management on account of the fourth Manufacturing revolution (Industry 4.0) has created a strong platform for the advancement of technologies such as 5G to grow in the manufacturing sector. 5G networks offer the manufacturing sector network characteristics such as low latency rate and high reliability that are essential to support critical applications such as processing data of the units manufactured, data associated with inventory in the warehouse, tracking of stock from the factory to end-user, and others. Additionally, the technology will offer high bandwidth and connection density, for which manufacturers are currently dependent on fixed-line networks.

The other segment involves other industries that create great opportunities for the 5G technology and equipment market, such as healthcare and transportation and logistics.

Healthcare: Evolving trends such as wearable devices, secure online consultations, and remote procedures such as robotic surgery will help the sector improve resource efficiency and meet consumer demands for convenience and choice. Such a scenario offers numerous opportunities for the primary parties involved in the growth of 5G technology, namely telecom operators and equipment manufacturers, to penetrate new value chains and initiate partnerships that will fundamentally benefit the sector.

Transportation & Logistics: The key areas of challenges that the transportation & logistics sector faces include traffic congestion, collisions, and pollution. The deployment of 5G would help address these issues by enabling an Intelligent Transport System, which will introduce concepts such as vehicle-to-infrastructure (V2I, and multimodal transportation, among others.

With a growing base of unique mobile subscribers, North America constitutes a rapidly growing telecom sector. According to a study conducted by the GSM Association, the number of unique mobile subscribers is estimated to be about 321 million in 2019, and this figure is projected to reach approx. 345 million by the end of 2025. High subscriber penetration, combined with high consumer spending on mobile services, places North America as one of the key potential regions for the 5G equipment market to grow.

The European Commission has been identifying 5G opportunities since as early as 2013, and it has been constructively deploying policies and trails that foster strong infra growth for 5G technologies. However, there is a significant gap between Western and Eastern European countries with respect to how ready they are to launch 5G technology. This readiness of a country to adopt technologies dependents on various parameters, namely infrastructure, regulations and policies, innovation landscape, human capital, and company profile.

Asia-Pacific has been a key contributor to subscription growth over the years. According to the GSM Association, approx. 67% of the global mobile population came from Asia-Pacific in 2018, which depicts the region’s strong growth prospects in the 5G equipment market. Several mobile operators in the region are significantly investing in the technology and associated infrastructure. The GSM Association estimated that the region would record investments worth approx. USD 370 billion in building new 5G networks between 2015 and 2025.

4G to Remain Dominant in LATAM throughout the Forecast Period

Latin America is a large region constituting several developing and developed markets that could behave as highly unstable economies. The future of any technology depends on macro-economic factors, and those in Latin America, such as hyperinflation, do not foster a strong and secure environment for investments associated with 5G. For instance, Argentina recorded a staggering 47.6% inflation rate in 2018. Similarly, while Brazil can be considered as one of the fastest-growing countries in the region, limited progress in the adoption of economic reforms has caused a slackening in the economy, resulting in a slowdown in foreign investments. According to our findings, 4G technology is growing and will remain the dominant technology until 2025, considering the reparations of the above mentioned macro-economic factors.

For 5G technologies and associated markets to establish strong grounds in the region, the countries of potential opportunities are Brazil and Chile on account of investments made by private firms and high adoption rates towards new technologies. For instance, in August 2019, Huawei Technologies, a telecommunications equipment company, announced plans to invest approx. USD 800 million in building a plant in Sao Paulo by 2022. Similarly, in May 2019, Huawei announced an investment of about USD 100 million in improving Chile’s internet infrastructure, creating a platform for the smooth deployment of 5G technologies in the long run.

Which is the leading segment in the 5G Equipment Market?

Consumer Electronics Segment is expected to be leading segment in 5G Equipment Market during the forecast period.

How much is the 5G Equipment Market worth in the future?

Who are the active players in the 5G Equipment Market?

Which region is expected to hold the highest market share in the 5G Equipment Market?

What is the key factor driving 5G Equipment Market?

What was the value of the Global 5G Equipment Market in 2020?

Rest Of Middle East And Africa
By Type

Rest Of Middle East And Africa
By Application