Report Description
Regional Overview
Company Profiles
Buy Now
Aug 05, 2020   Market Overview A Ground Power Unit (GPU) can be either a fixed or mobile unit that can be connected to the electrical system of an aircraft while on the ground to provide either 120V AC or 28V DC power. Ground power units usually consist of a generator powered by a diesel engine but may found in other configurations. Ground power units are used to supply several aircraft with control when on the land. Supporting large aircraft as they drive around the runway, such as during a landing, is the m...
Request Free Sample Report

A Ground Power Unit (GPU) can be either a fixed or mobile unit that can be connected to the electrical system of an aircraft while on the ground to provide either 120V AC or 28V DC power. Ground power units usually consist of a generator powered by a diesel engine but may found in other configurations. Ground power units are used to supply several aircraft with control when on the land. Supporting large aircraft as they drive around the runway, such as during a landing, is the most common application for larger power-supplying vehicles. Ground Power Unit also helps to establish a low-pressure atmosphere in which practicing pilots can exercise and master the aircraft's avionics before eventually flying. 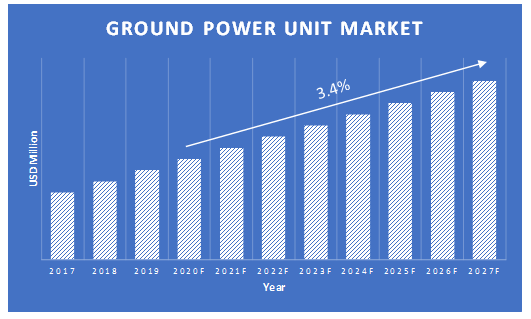 As per the International Air Transport Association, the demand for global air traffic grows by 6–7% every year. Expanding airport infrastructures, burgeoning disposable income in the developing economies, and increasing affordability of air travel has significantly surged the flight capacity in the last few years. The surge in aircraft services across the globe has created immense pressure on the ground support equipment (GSE), further driving the demand for ground power units to support the continuity in operations of the aircraft. The demand for airplane push-back and hook-up, forklifts and lifts, carts, vehicles, air-conditioning tugs, belt and container loaders, light-duty trucks, and other equipment that serve the purpose of powering and servicing aircraft has increased significantly. The International Air Transport Association (IATA) predicts a rise of 4.1% of cargo transportation by airways by 2021. Thus the rapid expansion and development of airport infrastructures has propelled the growth of the market

Increase in Warehouse Operations at Airports

Expansion in the international tourism industry has incremented the load on aircraft capacity, passenger and baggage handling, and storage and warehouse operations. Asia is one of the leaders in global air travel. India and China are witnessing rapid development in the domestic aviation sector due to burgeoning consumer spending power and increasing tourism in these countries. Further increase in per capita income is driving the domestic aviation sector, resulting in a shorter turnaround time of domestic flights with increased travel frequency. It is significantly driving the demand for ground support equipment, such as power units, to cater to the growing number of aircraft. Additionally, surging cargo activities from these regions have further contributed to the rise in warehouse activities, which includes unit load device (ULD) handling, ULD airworthiness control, and ULD build-up. This has propelled the need for hiring a skilled workforce to handle warehouse activities and manage aircraft powering effectively.

Poor charging capabilities and lack of trained staff to handle the ground support equipment (GSE) is a prime challenge hampering the market growth. The size of ground power units is driven by the fleet flight schedule and technological properties of aircraft, batteries, and chargers. GPUs are very expensive to acquire and maintain and are complicated machines that are not universally powered by internal combustion engines and require routine maintenance. Frequent repair of the ground power unit infrastructure to provide operational efficiency incurs a substantial added cost to the organization. Thus, many airlines under-purchase or rely on second-hand machines to support the vast aircraft charging infrastructure at a reduced cost. Such equipment ends up being uncooperative, leading to significant damages. Portable power units are required to be deployed where fixed ground power is not available. Besides inadequate provision and rising electric chargers, poor pit system design to support a mechanical load of aircraft, and lack of confined spaces to manage and store huge devices in smaller airports thereby restraining the growth of the market.

The Ground Power Unit market around the world had been undergoing a downfall due to the global air travel’s first fall in more than a decade due to the limitations on domestic and international travel.As governments all around the world are slowly lifting the lockdowns, customers have started returning to work. The future of air travel is vague, as many people are scared to travel because of hygiene concerns and quarantine rules. However as the Aircraft ground support equipment has become one of the most desired equipment at airports in recent years, it is likely to gain traction post-pandemic.

On the basis of type the global ground power unit market is divided into fixed and mobile. Mobile or portable aircraft ground power unit is highly in demand owing to its flexible use and efficiency as a generator and engine. It supplies optimum power with reduced operation, maintenance costs, and can withstand the harshest conditions found in the airport environment. Airline companies prefer portable ground power units because of its toughness, competitively-priced, and high-discharge batteries. Some high power mobile GPUs can charge as fast as 38 minutes, producing 1560 peak starting amps and a continuous 40 amp output. Thus the mobile type segment caters to the largest share in the market.

On the basis of application the global ground power unit market is divided into Civil Airport, Military Airport, and Business Airport. The civil airport segment of the global ground power unit market is expected to register significant growth during the forecast period. Ground power units use high frequency insulated-gate bipolar transistor (IGBT) technology to generate a sine wave input and unit power factor suitable for civil airports. Rising requirements of AC/DC power or Combo units and the APU (Auxiliary Power Unit) in civil aircraft to start the engine and onboard supply drives the market growth. Manufacturing companies are designing best-in-class solid-state, stationary, and mobile GPUs, for the civil aviation market that can guarantee a safe, efficient, and high-quality power supply to all aircraft in hangar or ramp aircraft maintenance.

North America dominates the ground power unit market during the forecast period owing to the large fleet size of commercial and general aviation aircraft. High air traffic due to the rising demand for domestic and international air travel is driving North America’s market growth. Economic growth and affordability of air travel have increased the number of air travel passengers, which is projected to surge the demand for aircraft and their support units. Many courier and cargo companies are investing significantly in air transport to expand their reach and increase their delivery speed. Further many public-private partnerships and government investments are expected to assist companies with inadequate ground support equipment and manage their aircraft fleet.The U.S. is a key market due to the presence of a significant number of airports.

The European aircraft ground handling systems are expected to register the highest growth during the forecast period on account of the growing fleet of aircraft, which has increased flight movements at airports. Surging passenger and cargo flight operations in the last few years have increased the demand for advanced aircraft ground support and power systems. Several European airline operators are using ground support equipment that has low carbon emissions rates. Further,the region is heavily investing in creating green airports that are reliable and cost-efficient.Such innovations are also expected to improve the overall performance of airport operations. Increasing governments and private operator investments for developing airport infrastructure to support passenger demands due to the ever-expanding tourism industry drive regional market growth. Renovation of old airports and the incorporation of advanced technology, such as electric aircraft tugs and electric GPUs, drive the market growth.

Which is the leading segment in the Ground Power Unit Market?

Civil Airport Application Segment is expected to be the leading segment in Ground Power Unit Market during the forecast period.

What was the value of Global Ground Power Unit Market in 2027?

Who are the active players in Ground Power Unit Market?

Which region is expected to hold the highest market share in the Ground Power Unit Market?

What is the key factor driving Ground Power Unit Market?

Rapid expansion and development of airport infrastructures, increase in warehouse operations at airports are the key factors expected to drive Ground Power Unit Market during the forecast period.

How much is the Ground Power Unit Market worth in the future?