Industrial robots are specifically designed to perform tasks of repetitive nature for a long period with a major aim to reduce labor costs. These robots find their best application in industries namely; automotive, electronics, chemicals, pharmaceuticals, equipment manufacturing, and food & beverages among others.

Automation is observed to be evolving rapidly and has eventually resulted in revolutionizing the industrial sector. Some of the major disruptive trends of technological nature that positively impact the industrial robots markets are explained below:

With the increasing demand for automation, the industrial verticals are observed to undertake substantial steps towards building an infrastructure that favors the deployment of the surging demand. For instance, with the concept of autonomous cars materializing it becomes vital for the automobile manufacturers to build an efficient outcome that meets the set standards of efficiency and also cut down operational costs. However, to gain a competitive edge several companies have been observed of integrating automation by deploying industrial robots in their operational processes. For instance, in 2017, Tesla Inc., acquired Perbix, a company active in the production of automated equipment for factories. This acquisition was completed with an aim to introduce automation in the company’s factories. In 2018, the company built its Model 3 in a fully automated environment with the help of industrial robots.

Sensor technology to surge the deployment of artificial intelligence (AI):

Sensor technology includes sensor-based cameras, light detection and ranging (LiDAR), ultrasonic sensors, and radar and are considered to be among the major components of industrial robots and have prominently served industries such as automotive and manufacturing over the time. However, the quest of making automation more accessible to a wider range of industries has led to the deployment of AI and thus it has been studied that several manufacturers of industrial robots are deploying this technology. For instance, FANUC CORPORATION, manufacturer of industrial robots deploys AI to its robots so to make them easier to train and more accessible. In April 2019, the company launched an artificial intelligence-based tool that would help train robots to pick the right objects with the help of sensor technology and annotations.

Such a dynamic scenario with the advent of new technologies and infrastructure not only offers several growth opportunities in the potential market scope but also favors penetration in the untapped market for the industrial robots.

Based on type, industrial lasers have been segmented into stand-alone, collaborative robots, and mobile robots.

Designed to perform tasks in collaboration with the labors engaged in industrial processes collaborative robots offer an economically-viable entry-point to robotic automation in several industrial verticals. Traditionally the operations of a labor-intensive industry demanded highly skilled system integrators and internal robot experts that took care of the processes associated with installation, programming, and operation of industrial robots. This would heavily contribute to the labor costs of the company specifically for manufacturers that operate short production runs. To curb such miscellaneous costs the deployment of collaborative robots turns out to be an ideal solution. For instance, for simple and stand-alone applications, collaborative robots are designed to be lightweight, mobile and demand minimal robot training professionals for installation and programming. However, a highly skilled system integrating professionals would still be in demand for scenarios that require re-designing of the entire production process.

These robots serve in areas namely welding, material handling, quality testing, painting/spraying, and assembling, among others. As per our study, material handling accounted for major share in the application of collaborative robots as they help reduce the time of assembly and introduce speed & accuracy in labor intensified industries namely automotive and food & beverages. 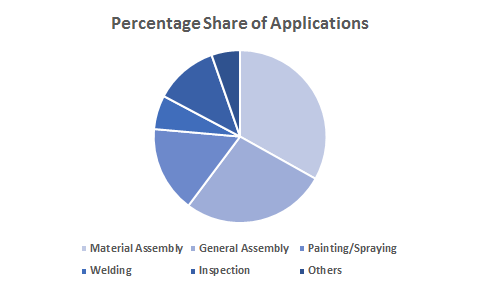 Additionally, according to our analysis, it is observed that Europe accounts for a major share of the collaborative robot adoption on account of the strong influence of the 4.0 evolution among the industries.

It is followed by the Asia Pacific majorly on account of the growing SME’s and associated investments in introducing automation in their operations. For instance, Singapore is considered to be one of the advanced economies globally. In comparison to the large MNCs SME’s are observed to be contributing to an approx. of 46% share in the nation’s GDP, thereby depicting the importance of SME’s in the economy.

One of the ways SMEs are advancing is through the adoption of robotics and automation which has been backed by government support by means of initiatives and schemes supporting innovation in SME’s. Schemes such as the Productivity Solutions Grant (PSG), the Technology Adoption Programme (TAP) offers resources to the SME’s to adopt robotics and automation thereby by nurturing the market collaborative robots segment.

Furthermore, the collaborative robots segment witnesses have been observing active investments from major players over the period of 2015-2019. Some of the major active venture investors are mentioned below:

These scenarios are efforts to introduce automation in the industrial verticals which is one of the major drivers for not the only deployment of collaborative robots but also industrial robots.

Geographically, the industrial robots market is observed to be studied across regions namely North America, Europe, Asia Pacific, and LAMEA.

As per a study conducted by the International Foundation of Robotics (IFR) in 2018, the major areas of application for the industrial robots is considered to be in the manufacturing of automotive and electronics when compared to other applications such as food & beverages, plastic & chemical products, and metal among others.

The below-mentioned graph depicts the annual supply of industrial robots in industries between “2016-2018”. 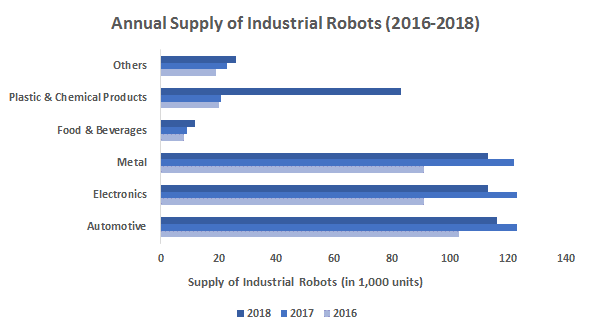 As automotive, food & beverages, and electronics sector involve operations that are labor intensified the deployment of the industrial laser becomes vital not only to curb miscellaneous costs associated to labor but introduce more efficiency and accuracy in the operations with an aim to serve better to the consumers.

Thus taking into consideration the above-mentioned statement and the graph, regions that hold a major share in the industrial robots market are namely Asia Pacific on account of its growing electronics and telecommunication sector and Europe because of the ever-growing automotive sector.

According to the Semiconductor Industry Association (SIA), in 2018 the global semiconductor sales accounted to an approx. of USD 468.8 billion. Out of which countries centric to electronics in Asia Pacific namely China and Japan witnessed a substantial increase in annual sales.

The below-shown chart depicts the percentage increase in sales of semiconductor in China, Japan, and Rest of Asia Pacific, the Americas, and Europe for the year 2018.

Additionally, parameters namely labor costs and the average age of population are considered to be indirect factors that drive the need for automation in the industrial processes. For instance, Japan’s geriatric population holds about one-third share of the total population till date, it becomes vital to establish alternative means to keep the economy going. Thus as a means to cope up with the limited resources which include labor, Japan is observed to be directed towards introducing automation and robotics in its industries. Such a trend accounts to be creating opportunities for the industrial robots market to grow and establish sound grounds.

The major countries that hold potential for the industrial robots market are India, Taiwan, Vietnam, Singapore, and Thailand. The factors that contribute towards growth are briefly explained in the table below: 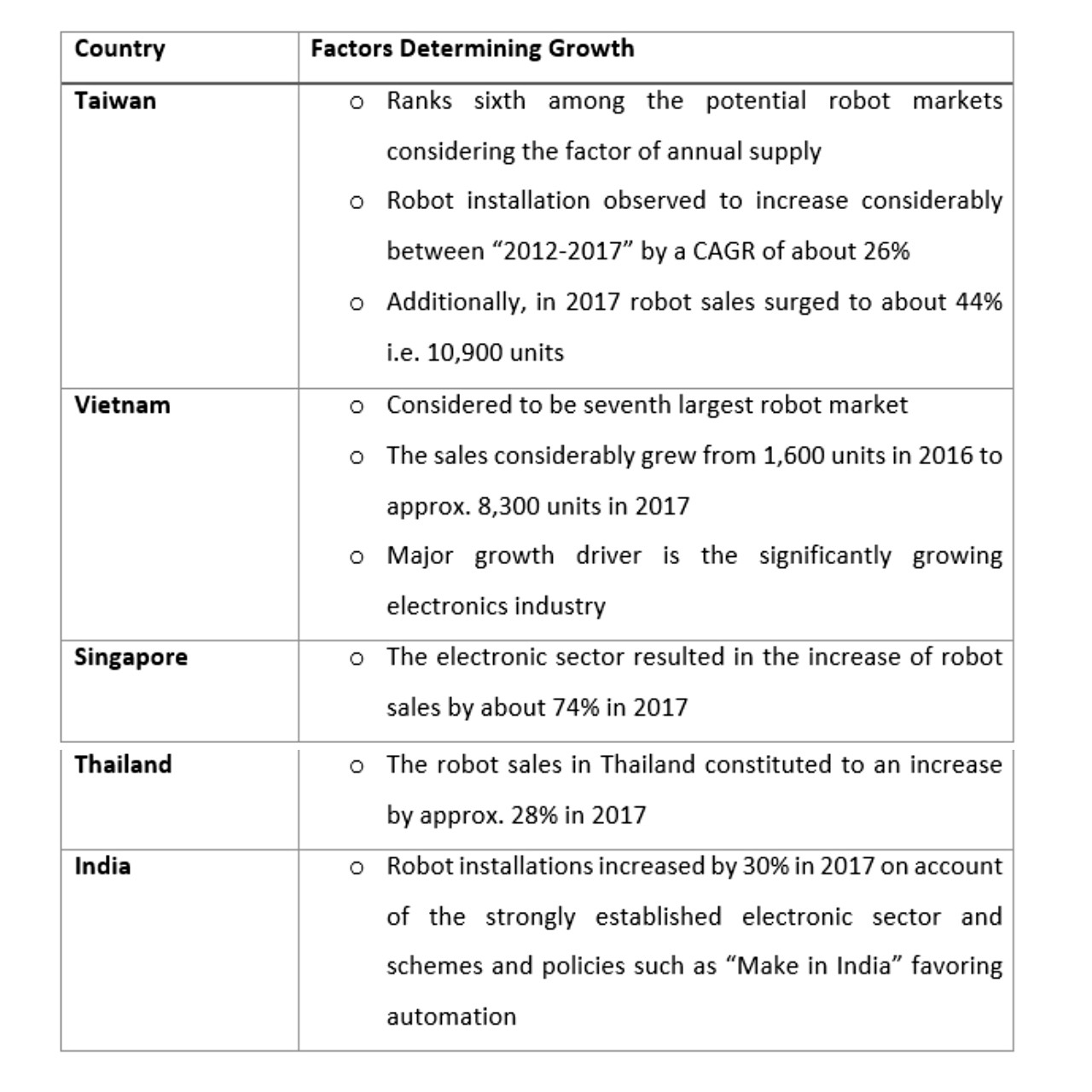 Who are the active players in Industrial Robots Market?

Which region is expected to hold the highest market share in the Industrial Robots Market?

The Asia Pacific is expected to hold the highest market share in Industrial Robots Market.

Which is the leading segment in the Industrial Robots Market?

Automotive Application Segment is expected to be a leading segment in Industrial Robots Market during the forecast period.