Understand the influence of COVID-19 on the Metalworking Fluids Market with our analysts monitoring the situation across the globe.

Manufacturing sector has been on the rise since the advent of industrialization and urbanization. There has been a significant growth in population and rise in disposable incomes owing to better paying jobs, consumerism and improved product visibility. This has resulted in increased demands for products that require setting up manufacturing facilities for processing the final product. Improved infrastructure and connectivity have led to a significant rise in transportation. There have been exceptional improvements in trade relations between different trading economies which is evident from the fact that around one fourth of the total global production is exported. Additionally, as per the World Trade Organization (WTO) there was an increase of around 4.7% in merchandise trading in 2017 as compared to 2016.

Consistent efforts are being made to connect different parts of a country by either roadways, railways or waterways. These undertakings require considerable infrastructure construction and metalwork. Improved trading and the constant need for better connectivity has increased the demand for metal works for various uses. This rising demand is expected to spell growth for metalworking fluids in the forecast period.

Metalworking fluids market is expected to reach around USD 12 billion by the year 2026 and is estimated to grow at a CAGR of around 10% during the forecast period of 2019–2026. 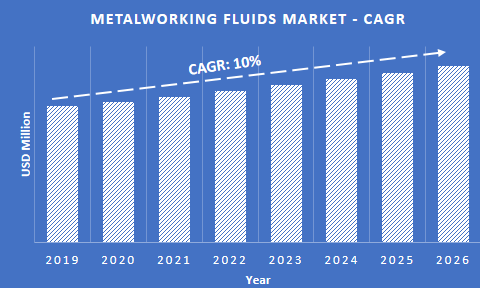 Global metalworking fluids are segmented on the basis of product, application, end-use and industrial end-use.

On the basis of end-use, it is classified into machinery, transportation equipment, metal fabrication. Machinery is expected to be the largest segment in this market owing to the rising demand of heavy machineries such as construction and agricultural equipment. Emerging markets are expected to contribute heavily in this segment of metalworking fluids market.

Based on industrial end-use, it is segmented on the basis of construction, electrical & power, agriculture, automobile, aerospace, rail, marine, telecommunication and healthcare. Construction segment is expected to witness highest growth owing to rapid urbanization and infrastructure developments in emerging economies and infrastructure upgradations in developed economies.

Asia Pacific is expected to witness highest growth in this market. This is owed to several developmental works and emerging manufacturing sector in economies such as China, India amongst others. China has considerable metal exports such as coated flat-rolled iron, metal mountings, iron structures amongst others which were valued at around USD 11billion, USD 10billion and USD 9.5billion respectively. Additionally, machineries such as industrial printers, integrated circuits and large construction vehicles require metalworking fluids while cutting them in precise shapes and sizes. Production of these equipment is expected to boost this market. For instance, Japan had considerable exports valued at around USD 26billion and USD 13billion in integrated circuits and industrial printers respectively. These factors are likely to boost the market of metalworking fluids in the forecast period. 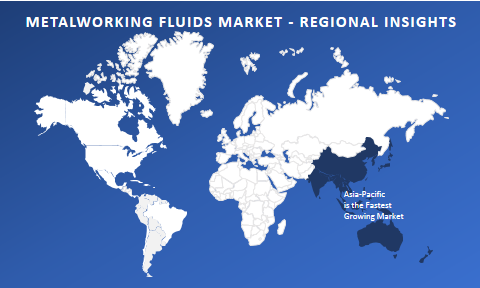 North America is expected to witness significant growth in metalworking fluids market. This is owed to factors such as presence of economically developed nations and availability of superior technology as compared to other regions. Heavy machineries manufacturing sector is expected to provide significant growth to this market. Manufacturing of heavy machineries require forging, machining, bending, forming among other processes which use metalworking fluids to provide better shape to the metal. For instance, there was a significant amount of exports involving transportation equipment from USA in the year 2016 which consisted of planes, helicopters and aircraft parts which together were valued at around USD 72billion.

Europe is expected to witness considerable growth in this market owing to presence of several manufacturers that produce parts and products requiring metal works. For instance, machineries having individual functions had an export value of around USD 16billion in Germany in 2016. Metalworking fluids are also used to give specific shapes and sizes to automobile parts and Europe was one of the highest exporters of cars in 2016 with exports values at around USD 390billion.