As the number of high-frequency electronic systems is increasing, the need for capacitive equipment that is designed to work at R.F. and microwave frequencies is also witnessing a significant surge in demand. As a result, there have been several improvements in the design and construction of capacitors, particularly ceramic capacitors. 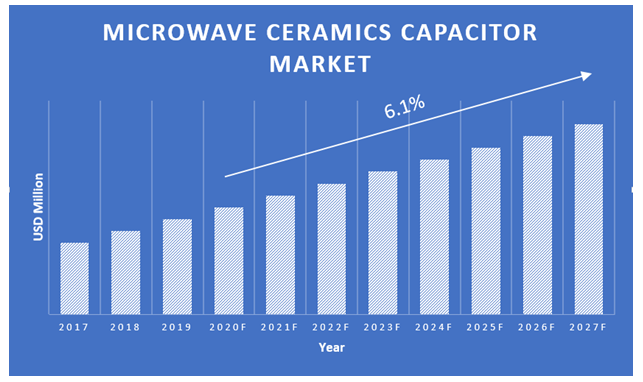 Miniaturization of Capacitors by Key Players

One of the key trends influencing the microwave ceramic capacitors market is the miniaturization of electronic devices. Electronic components, such as capacitors, diodes, and resistors, are preferably miniaturized while retaining as many parameters as possible with more functionality. Several OEMs and their electronics designers are miniaturizing equipment to optimize circuit and system performance, satisfy physical design requirements, and improve product aesthetics.

The increasing demand for microwave ceramic capacitors can be attributed to the ever-increasing deployment of high specification gadgets, such as P.C.s, smartphones, and tablets. The popularity of smart televisions in developing countries of the Middle East and Africa, Asia-Pacific, and South America regions are anticipated to augment the market growth.

China is the world leader in capacitor manufacturing, followed by Taiwan, Korea, and Japan. It is also a hub for consumer electronics. The country produces a massive amount of consumer electronics, including P.C.s, tablets, laptops, smartphones, and smart wearables. Additionally, as stated by our paid source, the user penetration of consumer electronics is anticipated to reach 32.5% in 2024 from 22.3% in 2020. As per the statistics from the Japanese manufacturer, the demand for small MLCCs for smartphones in the world is close to 376.3 billion in 2016. It is estimated that the demand in 2020 will reach 632.5 billion, and the annual composite growth rate is projected to increase by approximately 13.9%.

The shortage of ceramic raw materials is compelling customers to consider alternatives, including tantalum-based polymer electrolytic capacitors (KO-CAPs) and aluminum capacitors. On the other hand, electric vehicles are becoming more prevalent and require four times the number of capacitors than traditional automobiles. The shortage arises because top-tier manufacturers are allocating more resources to the profitable (and MLCC-intensive) automotive industry than conventional electronics.

China has shut down 40% of factories for environmental reasons. Furthermore, the prices of raw material needed to produce ceramic capacitors are also on the rise. Ruthenium, an unrefined metal widely used in MLCCs, has gone up to a staggering rate of USD 195 per troy ounce in February 2018 (a price surge of 487.5% since February 2017). Hence, the shortage of ceramic capacitors is becoming one of the biggest challenges for the microwave ceramic capacitor market.

The class 1 ceramic capacitors segment caters to the maximum market share as it is precise, temperature-compensating, and provides the most stable voltage, temperature, and frequency. Class 1 materials are most commonly used for high-frequency applications as they have the lowest losses and are ideal for resonant circuit applications, where stability is a necessity. This ceramic capacitor is less susceptible to aging than Class 2 ceramic capacitors, as C0G has an aging rate of 0% per decade hour.

Industrial machinery electronics is one of the broad areas of application for microwave ceramic capacitors. Industrial applications often require more than ten years of 24h/7/365 days’ operation, unaffected by unfavorable atmospheric conditions, such as low or elevated temperature, high humidity, and salt atmosphere. Therefore, the demand for superior and unfaltering electronics has increased over the years.

The primary areas of consumption for microwave ceramic capacitors in the industrial machinery include power transmission and distribution, motors and drives, renewable energy, lighting, and power supplies. Government regulations about power and lighting efficiency and energy independence are accelerating the demand for industrial-grade capacitors in industrial equipment. On the other hand, the trend of smart factory and factory automation has led to a dire need for smaller devices with improved reliability and higher heat resistance. Thus, to enhance the efficiency of industrial equipment, the demand for ceramic microwave capacitors is increasing at a staggering rate.

Germany, France, and Italy to Be the Primary Consumers of Capacitors for Consumer Electronics in Europe

The European Region caters to the second-largest share in the market. Western Europe is one of the largest automotive markets, with Germany ranking first in terms of production and sales of the automobile. The estimation of electronics and electrical content comprises 25% of the total vehicle value and exhibits colossal future demand in the automotive sector.

The growth of the microwave ceramic capacitors market in Europe relies on the demand for consumer electronics, such as television sets, P.C.s, and smartphones. Countries such as Germany, France, and Italy are few of the primary consumers of capacitors for consumer electronics. In the U.K., the electric vehicle market has witnessed a remarkable surge in demand over the past few years. Besides, there is a sizable increase in the number of U.K. manufacturers offering E.V.s as part of their new registrations of plug-in cars that leaped from 3,500 in 2013 to more than 150,000 in May 2018.

China: One of the Leading Manufacturers of Microwave Ceramic Capacitors

Asia-Pacific is the fastest-growing region in the microwave ceramic capacitors market, owing to its rising demand from the automotive, defense, and consumer electronics industry. The higher adoption of consumer electronics, such as laptops and smartphones, in countries such as China and India, stimulated the demand for the microwave ceramic capacitors market in the region. The advent of MLCC manufacturers from various countries such as Japan, China, South Korea, Taiwan, and India drives the market growth.

China is one of the leading manufacturers of microwave ceramic capacitors. The surging demand for capacitors in information technology, communications, and consumer electronics applications in China is driven by continuous product development, including smartphones, laptops, and desktop P.C.s, servers, T.V.s, and DVD players. As a consequence, several international players are eager to invest in the Chinese market. Further, the government regulations allowing developing countries to import items from China and Taiwan facilitates market growth.

How much is the Microwave Ceramics Capacitor Market worth in the future?

What is the key factor driving Microwave Ceramics Capacitor Market?

Which region is expected to hold the highest market share in the Microwave Ceramics Capacitor Market?

Who are the active players in Microwave Ceramics Capacitor Market?

What was the value of Global Microwave Ceramics Capacitor Market in 2029?

Which is the leading segment in the Microwave Ceramics Capacitor Market?

Class 1 Ceramic Capacitors Segment is expected to be the leading segment in Microwave Ceramics Capacitor Market during the forecast period.